Have you ever been totally dominated in Destiny ? Well, Bungie is here to help you. They have created a new system called “Mercy Rule,” in which losing players will get some retribution and full end-of-match rewards.

Senior Designer Andrew Weldon stated that the new rule is set to be included in Destiny’s update 2.0, and it will also have the ability to notice when a match is a blowout, resulting in Shaxx resetting the game clock to 10 seconds, to end the match quickly.

“We can also see that around 12-13% of games end with score deltas of > 10k points. Some of these are legit blowouts earned by exceptional play. We don’t necessarily want to touch those. However, as you can see in this highly technical markup, a certain range of these games are exceptionally unpleasant results: 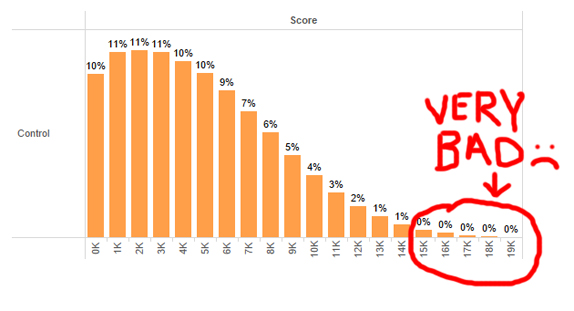 The Mercy Rule aims to identify these games in progress, and end them early. This serves three goals:

3. Reduce the number of players who are joined into bad games via join in progress

When the Mercy Rule hits, Shaxx will call out the end of the match. We immediately disable join in progress to prevent any additional players from joining the game (if anyone has dropped already) and reset the game clock to :10 seconds. After those 10 seconds, the match will end normally. All players will receive their end of match rewards and return to matchmaking.”

This new feature will be present in all team playlists except Elimination and Trials of Osiris, as well as Rumble, since there is already multiple targets and a score limit of around 25 kills. Destiny’s upcoming expansion The Taken King launches on September 15 for the PS4, PS3, Xbox One and Xbox 360.
Read Community Guidelines

Demon’s Souls Score Will Improve Upon the Original

Phil Spencer: “Our Largest Base Is Still 360 Players;” Halo 5 an “Important Milestone” for Xbox One

Aaron Greenberg: Rise of the Tomb Raider Can Stand Against Fallout 4; “We Hope People Will Buy Both”

Xbox Hardware Sales Decrease 17% Due to Lower Xbox 360 Sales, Gaming Revenue up by 6%