We spotted an ESRB rating for a Nintendo 3DS Corpse Party game a few days ago and now Xseed has let the cat out of the bag.

Corpse Party is being readied for release in North America for Nintendo 3DS and PC. It will hit the PC first via Steam, GOG, and Humble Store on April 25th for $14.99. Regarding the Nintendo 3DS version of the game, Corpse Party will launch with voice acting intact and Xseed claims it will hit the platform totally uncensored, addressing what has certainly become a pressing concern for fans of Japanese games released on Nintendo platforms. 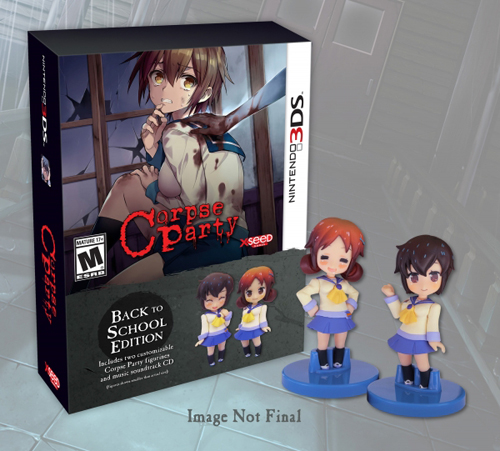 The game will release digitally and physically for the 3DS, with the digital version costing $29.99, and the physical version being a proper “Back to School Edition” complete with unique packaging, two figurines and a music CD packed with nearly 80 minutes of content. This version touts a $49.99 price tag. The game itself will contain some content missing from the original PSP release, making it seem like the best version of the cult classic.

The Nintendo 3DS release date is still unclear, but they released an announcement trailer for both versions the other day and you can check it out below. Check Out 18 Minutes Of Gameplay For The English Version Of Corpse Party: Blood Drive

Check out These Gruesome Screenshots for Corpse Party: Blood Drive

The Legend of Heroes: Sen No Kiseki and Much More Coming West Courtesy of XSEED Games