Today Koei Tecmo released patch 1.04 for Dead or Alive Xtreme 3, adding new DLC bikini, and some improvements to the game.

Below you can read the patch notes, including a very welcome feature that provides a bonus to the chance of a girl accepting gifts as your owner level increases. 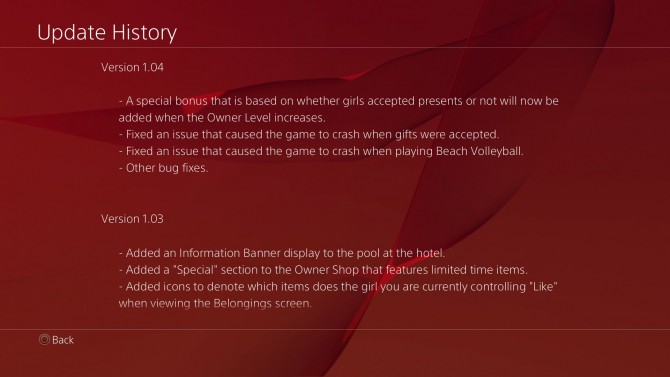 The new bikini sets are the Eel and Peanut sex. The first is quite racy, considering that it’s obviously inspired by the Japanese “shibari” art of bondage. The second is quite a lot more tame.

The most welcome change is that this time around both bikini sets are available with both Premium Tickets and Zack dollars, meaning that if you don’t want to spend real money, you can just grind for them all. Considering the outraged reaction of many of the fans to the previous batch, this is definitely a step in the right direction.

Below you can see a few screenshots of the bikini in action provided by Koei Tecmo, and all the colors available (nine per set), directly from my PS4.