Koei Tecmo released today patch 1.03 of Dead or Alive Xtreme 3, bringing a few changes to the game’s interface and to how lotions work. The first batch of DLC bikini was also implemented.

You can check out the full patch notes below. 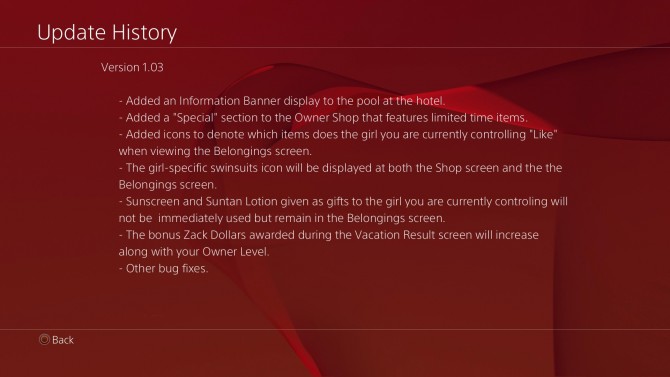 The new bikini come with good news and bad news. The good news is that one of the sets (in nine colors) can be bought with both in-game zack dollars (400,000 each) and Premium Tickets (8 each).

The bad news is that the other set comes only for premium tickets, and the pricing model is pretty crazy.

You’ll have to spend 16 premium tickets for each copy of each color of the bikini, which, if you bought the Asian version of the game, translates to roughly $5. But that’s not all.

The girl can refuse the bikini, since you have to buy it in the owner’s store. In which case, she’ll get a massive three hearts penalty and you’ll have to spend either 8 premium tickets or 400,000 zack dollars as the owner to rewrap it and try again.

In fact, the screenshots of the bikini itself in this article are courtesy of Twitter user Honobo, since Ayane threw the bikini back in my face. The ingrate…

Luckily, there might be hope for the bikinis to be released as an actual DLC pack some time down the line (they will be available in this form only until April 28th), as a note in the store mentions that “Swimsuits made available for a limited time only may be rereleased at a later date”).

Update: Added four official screenshots released by Koei Tecmo. Keep in mind that the last screenshot in the gallery portrays a bikini that won’t be available until the second batch of DLC launches on April 28th.