The Ace Combat games have a pretty solid track record as arcade based flight combat games.  Despite their great record, the gameplay has not been changed that much from title to title.  Small things have been added, but nothing that really changes the game.  While this was not a bad thing, Namco Bandai and Project Aces clearly wanted to change the game a little with Assault Horizon.

There are three major changes to the series in Assault Horizon that are shown through the demo.  The most obvious is that the game no longer takes place in a fictional world coming out of a cold war.  Instead, it takes a cue from the most recent PSP game, Ace Combat: Joint Assault, and places you in the real world.  The next major change is the addition of a fast paced dogfight mode.  Finally, the last major change apparent in the demo is the inclusion of helicopter missions.

The demo begins with hints towards the story, but no real details, before you’re thrown into one of the new dogfights.   It was a little disorienting as the tutorial for dogfights come later, but it really shows off how good the game looks.  You chase a jet at low altitudes over Miami until he eventually makes a mistake and ends up crashing into the scoreboard at a stadium.  The sequence sets a fast pace, and the combat follows.  While there is still the standard air combat, the demo really focused on the dogfight mode.  Essentially this minigame of sorts is a more efficient way to take out enemy aces.  While the regular pilots are still cannon fodder, the dogfights really up the pace of the game from the fights against the aces in older games like Ace Combat 6.  In the dogfights, you essentially end up on the tail of the enemy ace.  The computer takes over basic flying duties while you attempt to center your plane on his to get a solid lock on.  While it was fun, I liked the strategy of fighting the enemy pilots the classic way.  The dogfights do not seem like they are required though, and make for a cool alternate option to take down the enemy aces.  The cinema after the mission should also be noted, as it is very cool, and further hints at another great Ace Combat story. 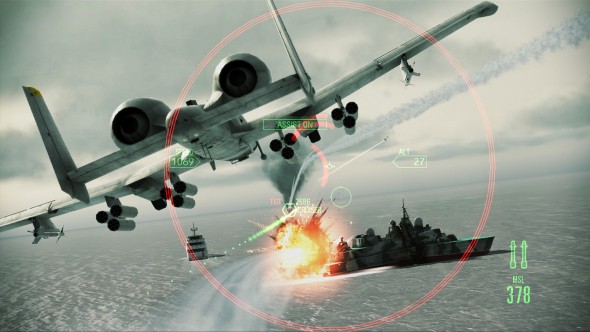 The other mode in the demo is the Helicopter mission, where you pilot an attack chopper to cover Delta Force troops on a rescue mission in an unnamed middle eastern country.  The first thing I noticed is that the game did not read my Ace Combat 6 flightstick well for this mode, mapping the left analog stick to the throttle.  There was no flightstick option in the controller options, which is a bit disappointing.  That said, it was a helicopter, and as such, would have been awkward, plus the flight stick worked fine with the fighter jet portion of the demo.  After restarting my XBox and using the controller, the helicopter mission became a lot of fun.  It was a nice change of pace from the fighter jet missions, yet still as frantic, as you cover your troops as they fight through the streets.  The helicopter mission was a bit more challenging, because Project Aces did an excellent job of making the helicopter feel heavy.  While it doesn’t feel sluggish, the weight of the helicopter forces the player to make some adjustments to their way of thinking.  That isn’t to say that the helicopter section was not as arcade-like as the jet missions.  By hitting both bumpers, you perform a barrel roll to avoid missiles.  While some helicopters can barrel roll, I imagine that they cannot do it quite as easily as in Assault Horizon.

The demo was a lot of fun, and the helicopter mission really stood out.  There will also be missions where you play as a door gunner to change up the pace even more.  Assault Horizon seems to be continuing the tradition of amazingly fun arcade-style flight games.  The story appears promising and the chatter between pilots is still there as well.  It was a great demo, with a solid showing of the two main types of gameplay featured in Assault Horizon.  If you have a spare few minutes, do yourself a favor and download the demo.  If nothing else, it will be a good way to waste a half-hour while you’re waiting for Gears of War 3.