If you speak to anyone who has played Deus Ex: Human Revolution, the one thing people have found to complain about is the Boss Fights.  For good reason too.  They unfortunately break the pace of the game, especially if you are playing through with a focus on stealth.  The boss fights felt off for good reason.  Eidos Montreal did not develop them.  They were offloaded to a separate studio, a small studio called Grip Entertainment.

While I did not mind the boss fights as much as some, I will still fully agree that they were jarring.  Square Enix and Eidos Montreal have already announced that there was DLC for the excellent First Person Shooter, but this weekend, Eurogamer is reporting that the game will include a new boss fight.

Before you groan, Eidos Montreal wanted to be clear that this DLC, The Missing Link, was created by them, and that the boss here is more in line with the stealth based gameplay of Deus Ex: Human Revolution.  They have even gone so far as to say that you can perform a nonlethal takedown of the boss. 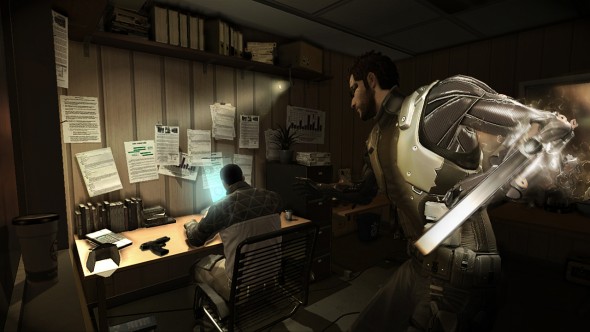 I personally find this news as refreshing, as the forced lethality when fighting bosses bothered me.  I traditionally like to go for no-kill play throughs in stealth games like Deus Ex and Metal Gear Solid and being forced to kill the enemies, especially when Jensen and the player knew that they had information and could interrogate them really hurt the overall feel of the game.

That said, I did not have as much of a problem with the actual combat, as each boss fight at least did include more than one way to beat the boss.  The boss fights were really the one thing keeping me from giving the game a perfect 10, but again, I stress that it wasn’t the difficulty spike that would have caused that, but rather the jarring nature of the combat with the context of the rest of the game.

Eidos Montreal really reinforces that they are a great studio though.  Not just by listening to fans and fixing the boss fights for the DLC, but also for not backing down and still including the boss fight.   It is another challenge to look forward to, and hopefully it wont be like shifting into another game like the boss fights were in the core game.