While it doesn't match up to PC or console performance, the Switch version of DOOM Eternal is still surprisingly up to the task.

Chalk it up to my distorted sense of time in the pandemic, but it’s surprising to think that DOOM Eternal somehow came out almost a year ago. Coming up on its first anniversary, DOOM Eternal left a big mark thanks to its frenetic pace and adrenaline-fueled action. That combo helped it to easily stand out as (arguably) 2020’s best shooter on consoles and PC. Last month, the game finally made its way onto the Nintendo Switch. So, of course, this begs the question of whether Nintendo’s nearly four-year old system can handle what DOOM Eternal throws at it. Surprisingly, the answer is a resounding “yes.”

After its release on PS4, Xbox One, Stadia, and PC in the spring of last year, DOOM Eternal finally made its way to the Nintendo Switch in December. The port comes courtesy of Panic Button, the team that originally brought 2016’s DOOM to Switch a few years ago. With that release, Panic Button proved it could handle the challenge of bringing a graphical showcase like DOOM to Nintendo’s portable hybrid at a solid level of performance, let alone being able to run the game at all. Thankfully, DOOM Eternal on Nintendo Switch is another capable port of a current-gen title that plays surprisingly well on the hardware, with a few caveats.

To address the elephant in the room right away; yes, DOOM Eternal on Nintendo Switch isn’t nearly as much of a graphical showcase as it was on last-gen consoles, PC, and (soon to be) on next-gen consoles. There are some clear compromises that had to be made to get DOOM Eternal to run on the Switch’s hardware: the game’s performance is capped at 30fps, its resolution is noticeably lower, and its textures, in particular, take a substantial hit. If you just look at the screenshots from the game throughout this review, you’ll probably get the impression that the game is a blurry, muddy, pixelated mess.

DOOM Eternal is Coming to PS5 and Xbox Series X 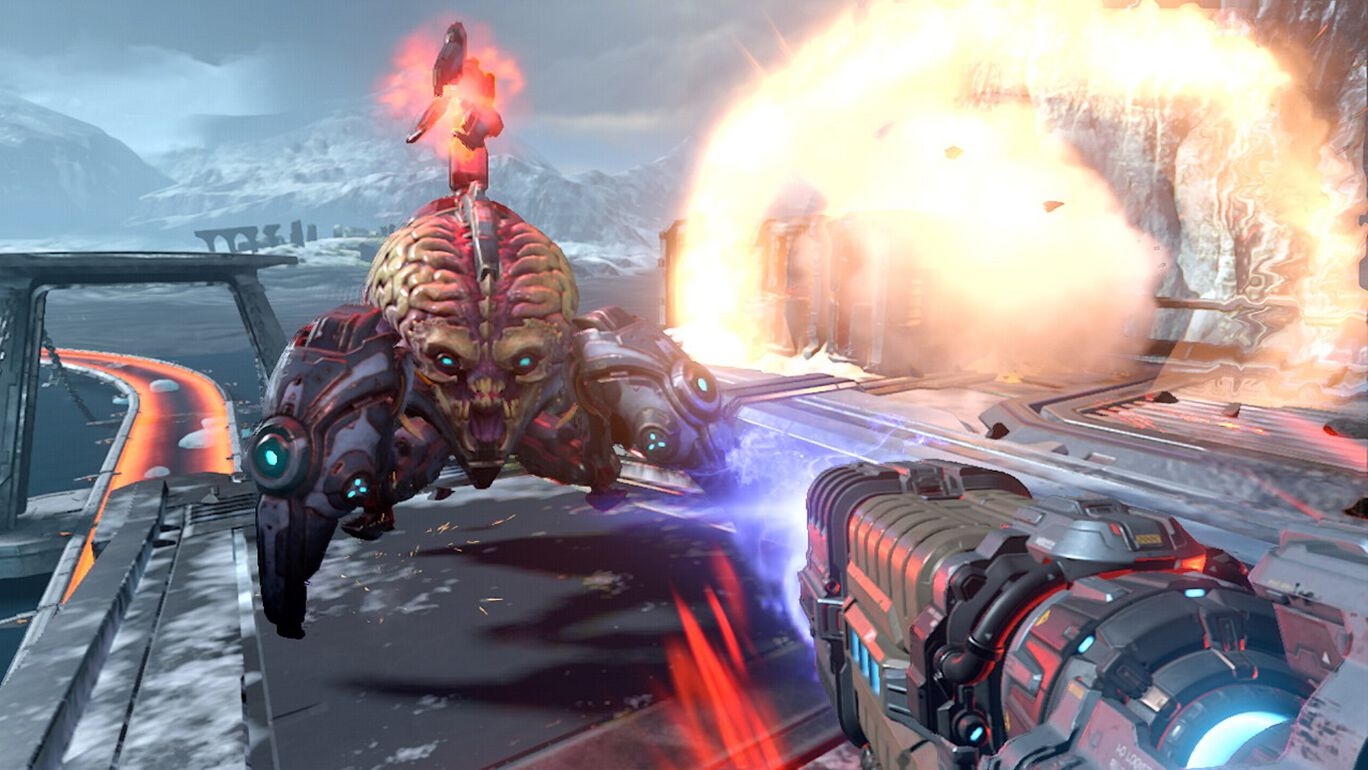 “Aside from the hits that it takes visually, the Switch version of DOOM Eternal does a commendable job at translating its momentum and speed, as players rip and tear their way through the demons of Hell.”

For anyone that played the game previously on higher-end hardware, it will likely be a bit of an adjustment getting used to the game’s performance at 30fps. After all, this is an experience originally meant to be played at 60fps. It’s jarring at first for sure, but not an insurmountable challenge once the rhythm of DOOM Eternal‘s gameplay comes into play. Even at its scaled-back performance, the impact of blowing away demons with the Super Shotgun, chainsawing into a lesser demon for health, and using the Doom Slayer’s flamethrower to restore your armor feels just as good while playing on the Switch as it did on consoles and PC. And even though they’re much less detailed and a bit blurrier, using Glory Kills to tear open a demon still has its gory charm.

From a gameplay perspective, the Switch version of DOOM Eternal mostly holds up to the demanding and fast-paced nature of its gameplay. Of course, your mileage may vary depending on how you decide to play it. Especially once you get into the game’s later stages (let’s not talk about when you face off with a Marauder). There, you’ll have to juggle multiple different enemy types while dancing around the battlefield, something that was often difficult even with a keyboard and mouse or an Xbox One controller in hand.

Doom Eternal Marauder Fight Guide — How to Kill This Asshole

For handheld Switch players, the Joy-Con controllers will likely be a bit of a mixed experience, as the analog sticks can sometimes feel imprecise and sluggish for what the game often asks of the player. By comparison, the Switch Pro Controller feels a bit more suitable to the twitchiness that DOOM Eternal asks for. Therefore, you might find it a better fit to play on a bigger screen in docked mode. 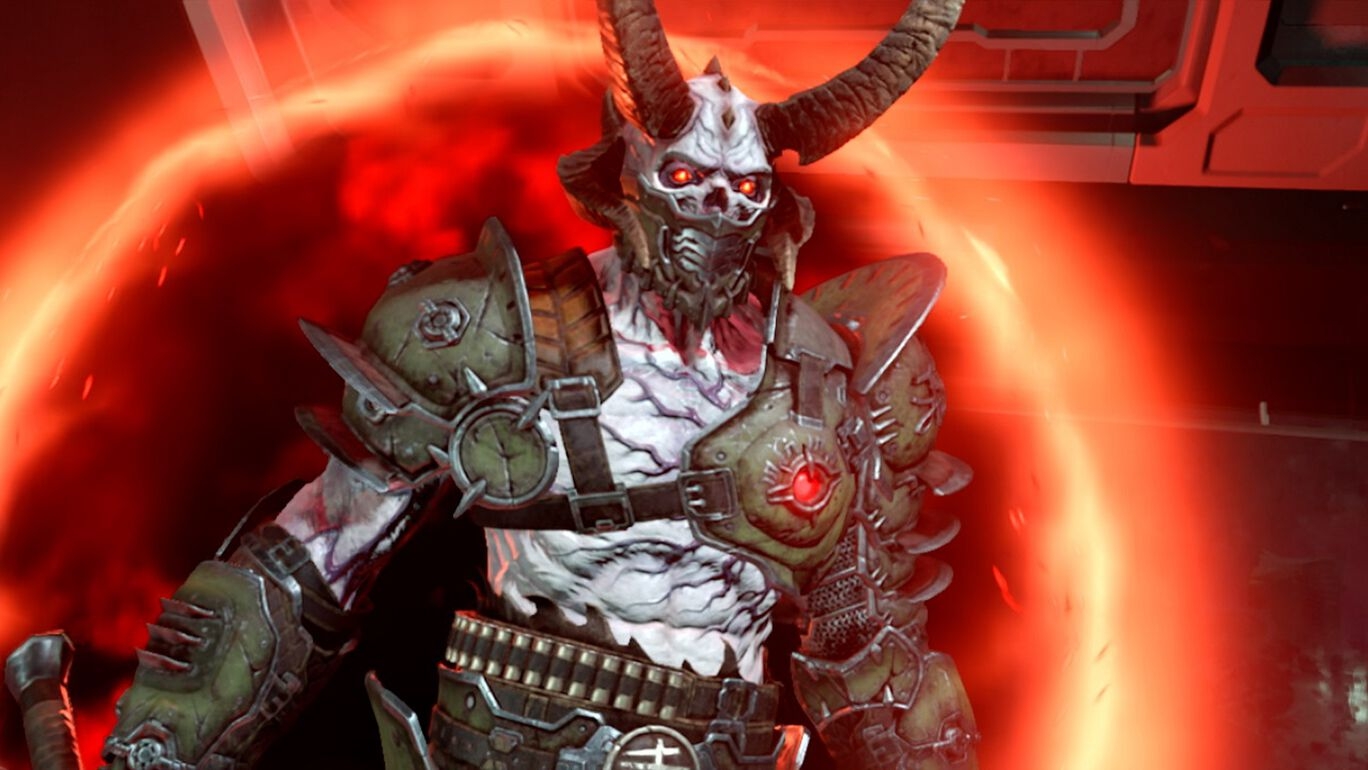 “The Switch version of DOOM Eternal mostly holds up to the demanding and fast-paced nature of its gameplay, though your mileage may vary depending on how you decide to play it.”

Though I had some initial hesitation on playing DOOM Eternal on Switch, I came away with a bit of relief knowing that not only does the game itself hold up, but so did Panic Button’s latest work to bring a current-gen experience to the Switch. While the gap between Switch and current-gen platforms has widened over the past few years, DOOM Eternal is another capable port alongside the system’s other technically impressive experiences like The Witcher 3 and DOOM 2016. While the Switch version can’t match the spectacle of playing on console or PC, DOOM Eternal is still a solid and satisfying fit for on-the-go play if you just want to blast demons in the face for a few minutes of insanity. Like Panic Button’s work on its predecessor, DOOM Eternal on the Switch feels like a surprising match made in Hell.