Drawn to Life: Two Realms Preview — Drawn Back to Life Drawn to Life: Two Realms Preview — Drawn Back to Life

Drawn to Life: Two Realms revisits the golden age of approachable puzzle platformers and shows a solid level of promise.

In my short hour-or-so with 505 Games and Digital Continue’s Drawn To Life: Two Realms, I felt transported back to the days of the original DS in a lot of ways. From the minds behind games like Scribblenauts, the Drawn to Life franchise–and by virtue, Drawn To Life: Two Realms–is representative of a lot of what made those DS-era puzzle games so great. They have charming art, an approachable loop, delightful art, and systems that continue to change and evolve as more elements are introduced to the games. Drawn to Life: Two Realms follows in the footsteps of those classics. Across the roughly hour-long section of the preview, I hardly experienced enough of Two Realms to get a good feel for its mechanics, but I had just enough time to fall in love with its art, world and music.

Your story begins with some dialogue that’s referential to earlier games in the franchise that might leave the uninitiated in the dark, followed by the standard exposition that has the player assuming the role of a “Creator.” Afterwards you’re able to make your character and given a wealth of customization options for each body part, including an option to draw your own character (hence the title) or select from a set of pre-drawn options. Players can also mix and match between the wealth of options to create some really amusing characters (can you tell that I like my chicken superhero guy?).

The tutorial started in a really simple way, introducing me to the feel of the puzzle platforming that the series is known for with satisfying, deliberate movement that I wish I was able to experience on my Switch. It’s not that the platforming felt bad while playing on PC with a mouse and keyboard, but I wish I was playing it on my Switch the entire time.

The platforming segments in the portion of the game that I played were divided between three different types of levels. The first is just a standard ‘get-to-the end-of-the-level’ format that generally serves as a means of introducing the player to whatever new mechanics the game wants you to use. These sections often provide a good combination of challenging but forgiving platforming that serves as a solid Trojan Horse for deeper mechanics that you’re expected to use later on in levels. Eventually, you’re expected to design parts of the levels using the parts you’ve just been introduced to.

The second kind of level the game introduces is a ‘kill-all-the-enemies’ style that is easily the least interesting level variant, but only because it doesn’t do anything new. Instead, it requires some understanding of the more puzzle-like elements introduced in the first level type but never does anything to evolve it, introducing enemies in the same way that the first style gradually introduces puzzle mechanics.

The third level type is a sort of combination of the other levels that requires an understanding of the game’s mechanics but in a really interesting and (sometimes) slightly challenging way. It starts with a Mario Maker-style grid and a few elements that you’re required to place throughout the level; these will, in turn, help you complete the level.

This specific type of level is often the best showcase of why the Drawn to Life games work so well as puzzle-driven experiences. Every mechanic and element of the levels that have been introduced tend to interact with each other in ways that make puzzle-solving feel as much like problem-solving as they feel like experimentation. That sense of discovery from experimentation is both rewarding and satisfying in a way that offers immense potential for the rest of the game, and it’s often where Two Realms is at its best. 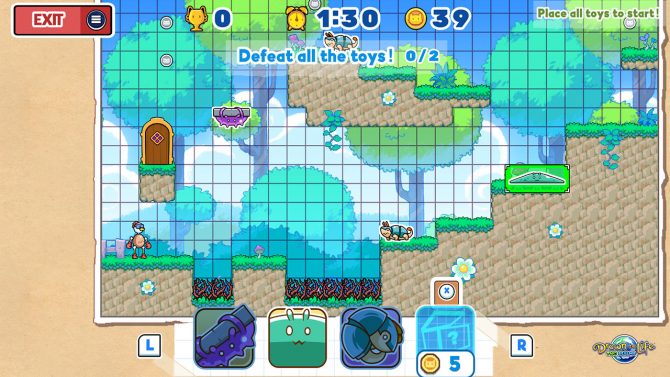 Part of the reason that experimentation felt so satisfying is that Two Realms‘ systems are clearly deep in a way that I always find impressive. It feels evocative of the shrines from Breath of the Wild, just on a smaller scale; the interactions between different elements introduced earlier in the game lends a sense of discovery to the gameplay, making the puzzles feel more dynamic.

Outside of the gameplay, there wasn’t a whole lot in Two Realms happening to keep me interested. The overworld that’s meant to function as a sort of connective tissue between levels is littered with NPCs to talk to. It occasionally offers cute dialogue sequences, but for the most part, they don’t amount to much aside from building the world of Drawn to Life: Two Realms. The real star of the overworld and generally anything that happens outside of the platforming challenges is the presentation.

Every character is lovingly animated with really fantastic, pixel-perfect spritework that reminds me of classic DS and Game Boy Advance games, and the world has a similar aesthetic with environments that can only be described as “cozy” and “soft.” To sweeten the deal, Drawn to Life: Two Realms features music that’s equal parts relaxing and cute. It’s certainly not an overworld on the level of an Earthbound or the like, but it doesn’t have to be. It’s charming on its own without requiring too much investment from the player.

Drawn to Life: Two Realms shows some serious promise, provided it can keep introducing new dimensions to its gameplay without muddling the sense of discovery that comes with trial and error. While its story doesn’t necessarily live up to the gameplay, its art and sound design make even just scrolling through dialogue a pleasant experience.

Drawn to Life: Two Realms will release for Nintendo Switch and PC on December 7, 2020. Drawn to Life: Two Realms presents an interesting premise and an occasionally charming world, but never quite lives up to any of it. SuperMash, The Game That Makes Games, Hits Consoles May 8 Next Up Hero Announced by Former 5TH Cell Devs for PC, PS4, Xbox One and Nintendo Switch Lock’s Quest Remaster Coming to PS4, Xbox One, and PC Sometime in April

Scribblenauts Unmasked Infograph Breaks Down The Game “By The Numbers”