Driveclub: How to Level Up Insanely Fast and Speed Up Your Race to 50 to Unlock All the Cars Driveclub: How to Level Up Insanely Fast and Speed Up Your Race to 50 to Unlock All the Cars

Driveclub‘s progression slows down considerably around level 25, and getting to level 50 can be a little time consuming for those that can’t play several hours a day, every day of the week. Luckily, there’s a way to level up faster. Much faster, actually.

Yesterday night I was tackling a particularly difficult drifting scenario, trying to get that elusive third star, when a realization hit me: as I tried, and retried, and retried again, my experience bar was progressing much faster than normal. The reason for that was right under my frustrated eyes: I was drifting.

While drifting will make you inherently slow, Driveclub rewards drifting a lot. Unfiortunately drifting challenges are just a sequence of three or four corners, and require you to finish them and reload if you want to get more points, which isn’t really efficient for grinding fame.

The good news are that the same fame rewards for drifting apply everywhere, so here’s what you can do to accelerate your leveling considerably.

Start a Time Trial and select Tamil Nadu 01 in India. Theoretically any broad and bendy race track will work, but Tamil Nadu comes with many gentle and long corners that are just perfect for drifting all the way through them. As your ride for the day, select a car with a high drifting statistic. My choice is on the Ferrari 430 Scuderia, but there are others that will work, and a bit of experimentation will give you the best results depending on your style.

Try to choose something that isn’t too slow, because it won’t drift well and it’ll take you too long to complete a lap. On the other hand super-fast cars like the Hennessey Venom GT can prove very challenging to drift properly, especially if you’re a beginner.

Then all you have to do is to start lapping the track as many times you want, making sure to drift through every single corner. A single lap of Tamil Nadu gives me an average of 12,000 fame points. Considering that I’m really terrible at drifting, if you’re better than me you can probably pull about 15,000-16,000 points a lap. Lapping it without drifting will grant you a mere 2,500. My drifting record, as you can see in the picture at the bottom of the post, is little north of 4,000 fame for a single corner in the second half of the track.

It doesn’t matter if you make mistakes or if you’re slow. As long as you’re drifting, fame points will start to rain like sweet candy. You’ll still get points even if you slide in the dirt, as long as you don’t hit the barriers. You can do as many laps as you want, and considering that a drifting lap takes about one minute and forty seconds, you can probably do the math and see just how fast you can level up like this.

If you don’t know how to drift, you shouldn’t worry too much. There are several styles, but the most basic one (which happens to be the one I use, because as I said, I’m terrible at drifting) is very easy to learn. Make sure that you approach each corner in 3rd or 4th gear (4th is better for gentler, longer turns. You can also pull 5th if you’re good in the longest corners, and the momentum will grant you very high scores), then as soon as you start turning, press the handbrake button. The car’s back will start sliding.

When you’re reached the right drifting angle, release the button. Holding the button for about a second will normally get you through most corners. If you see that the car straightens too early, and you have enough momentum, just press the handbrake button again. If the tail slides too much and you’re about to spin, counter-steer by turning your wheel or pushing your analog stick in the opposite direction violently. Don’t be afraid to be abrupt when you counter-steer, because it won’t worsen your situation, and as a matter of fact if you aren’t, it won’t be effective.

After racking up as many point as you want, just quit with “Finish Event” to bank all the fame you earned (do not restart until the points are tallied). You can do it as many times you want, as long as you want, and it’ll even improve your drifting skills, which are sorely needed for certain events of the Tour. This method will also work perfectly in the PlayStation Plus Edition when Sony will launch it, as it includes everything you need.

Below you can see a video showing one of my laps. Forgive the terrible drifting mentioned above, but as you can see, the fame comes in spades anyway. 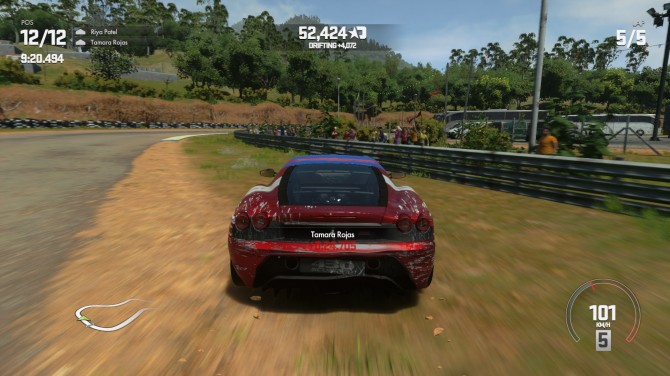