If you’re waiting for the situation of Driveclub to improve, things are gradually getting better according to Game Director Paul Paul Rustchynsky, who took to Twitter to give another update on the state of the game.

According to Rustchynsky, the team is making progress, with more people allowed to play online, even if the good folks at Evolution are going to continue working around the clock until the situation fully normalizes.

We’re making progress & we’ve got more people playing online. And we’re going to continue to work 24/7 until everything is fixed.

In fact I just logged into the game, and I was able to get connected to the online features immediately, which is basically a first since Driveclub‘s launch.

If you’re interested in the “free” PlayStation Plus Edition, the wait for a release date might not be too long:

That most decidedly is making its way to the store. We’ll have a date for you soon.

Interestingly, he also explained that the problem isn’t in the servers’ hardware, but it lays in the software itself.

It’s software issues, the hardware is up to the job.

Rustchynsky also mentioned that the team is looking into options on collision and corner cutting penalties, and will be considering how to minimize the possibility of getting taken out by an unfair player online due to the lack of car damage.

We’re looking at making changes to the penalty system.

In addition to that we learn that the addition of clutch support in the future is unlikely, but H Shifter is a possibility, and more HUD options will be added as well.

Finally, he defended the development time which has been necessary to release the game, responding to an user who mentioned that other developers create more cars in less time.

The DRIVECLUB cars are built to an unprecedented standard, as is the audio. Plus everything is done from scratch.

Looks like things are starting to get better, even if the situation definitely can’t be considered even close to solved. Hopefully we’ll be able to fully enjoy the game and its online features soon, and those waiting for the PlayStation plus version will be able to join us without too much further delay.

Update: apparently patch 1.03 is also rolling out. My own PS4 still did not download it, but the patch notes have been shared by Twitter user Richard Jenkins and retweeted by Rustchynsky himself.

According to the Game Director “Patches are staggered per region. As soon as they exit QA they’ll be made available.” 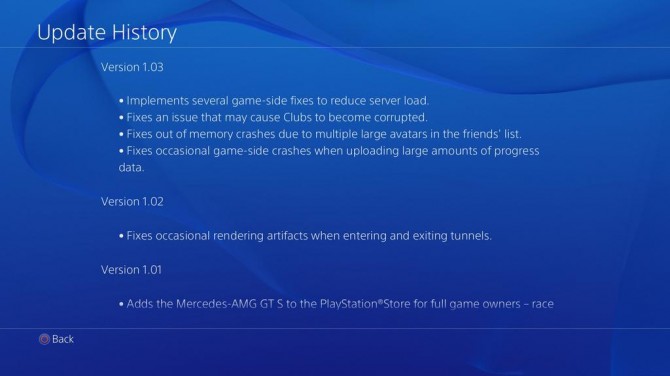