My very first E3 ended with a bang: Bethesda’s The Elder Scrolls V: Skyrim was the last game I saw this year. It was easily one of my most anticipated games of the show, so despite the crushing exhaustion from the show, I still found myself bouncing a little bit as I filed into the theater to see Skyrim for the first time. Bouncing turned to stifled giddiness as Todd Howard himself entered the room to give us “The Final Skyrim Presentation of E3″.

So was it everything I was hoping it would be? Hit the jump and we’ll talk.

The demo began with Todd’s character exploring the lush Skyrim countryside, showing off the brand new graphics engine utilized by the game. It definitely has the same kind of feel as Bethesda’s previous titles; I immediately began having flashbacks to that summer I logged about 200 hours on Oblivion over the course of a few months. Howard said that the game is running on a totally revamped engine that they’re calling “Creation”, though it still felt rather clear to me that it was the successor to Gamebryo.  The demo was running on Xbox 360 hardware, and in general, the graphics didn’t strike me as anything spectacular. They definitely get the job done, and there are some pretty beautiful vistas and decent special effects for spells and the like, but it’s obvious that some sacrifices in visual fidelity have to be made when you’re creating the kind of massively open-world experience Skyrim offers. If there’s one thing Bethesda is good at, it’s creating worlds that absolutely beg to be explored, and that definitely appears to be the case here.

A few of the new game mechanics were shown right off the bat: All items and spells are now equipped by hand rather than equipment slot. Todd’s rather high-level character had a nice sword and shield combo to start, but also showed off the ability to equip any magic spells you’ve learned into one or both hands, and activating both hands at once created a powered-up version of the spell. No word on whether you can use this mechanic to fuse different spells together (ala Magicka) but that’s definitely something I’m looking forward to messing around with. 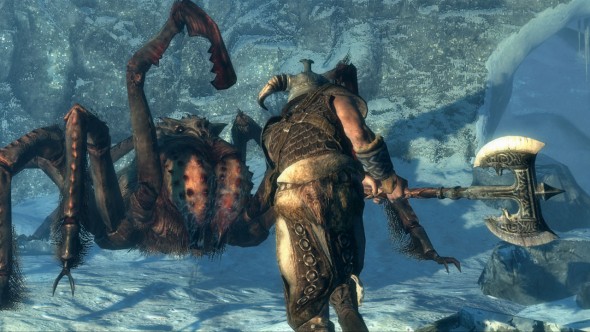 I had my first “TAKE MY MONEY NOW” moment with Skyrim when Todd opened up the inventory. Oblivion fans know what I’m talking about; managing your vast piles of loot, spells, and meaningless nick-knacks was the most unreasonably frustrating aspect of that game, so as soon as I saw the approach being taken in Skyrim, I just about gave a standing ovation right there. It uses an incredibly clean, tiered design that categorizes all your items and spells, and even gives you nice, big 3D models of everything for you to admire. It even allows you to tag certain items into a “favorites” category for easy access. It just generally seemed like an incredibly intelligent, smooth system for inventory management, which I’m sure will save the modding community lots of time.

Another big change comes with character progression. Skyrim builds on Oblivions rather non-standard model of leveling up according to the progression of individual skills, where using those skills increases their levels, and advancing your character’s primary skills will advance their level. But this time around the Skyrim team seems to have forgotten it isn’t making another Fallout game, so each skill comes complete with its very own perk tree. Howard didn’t explain precisely what those perks would be, but if you’ve played a Fallout game, you can reasonably expect them to be very cool little bonuses and extra abilities based upon their relevant skill. The perk trees are visually represented as individual stars in a constellation, and Howard compared building a character to creating your very own constellation. 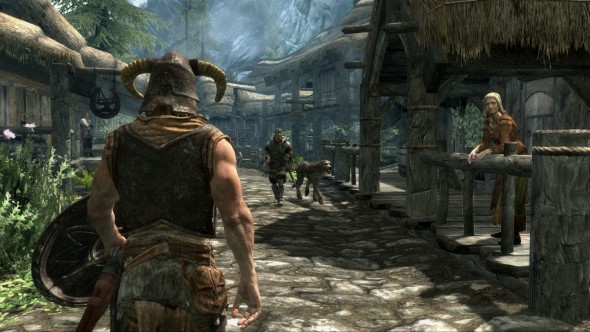 Next, Howard spoke about radiant story, as well as the new AI for the game’s NPC’s. The radiant story system will dynamically alter quest objectives and characters based specifically on your character and the things that you have personally done and seen during your game. For example, you might get a quest to go rescue a character you’d met at some point in your adventure. However, someone else may have played the game differently and didn’t meet that character at all, so when they receive the same quest, they character to be rescued will be someone entirely different. He also mentioned that radiant story will change quest objectives in order to get you to new locations and cities your character has yet to explore, which sounds potentially very cool.

Then it was time to check out a vast Nordic ruin, which Todd said was one of more than 150 unique dungeons in Skyrim. Evidently, the folks at Bethesda heard the complaints about Oblivion‘s seemingly endless copy-pasted ruins and caves, so you’ll be seeing a lot more hand-crafted dungeons, complete with plenty of puzzles and unique items this time around. The dungeon on display here gave Todd a good opportunity to show off various forms of combat (stealth!), some new spells (runes you can place on the ground to create magic traps), and a few new enemies, as well as giving us our first look at “shouts”, a new type of magic spell in Skyrim. Shouts are created from words in the Dragon language, which of course, your character can learn being that he is a Dragonborn. You can learn new words from ancient ruins and combine them power drawn from slain dragons to create new shouts, allowing you to use abilities like an enormous burst of flaming Dragon’s breath. 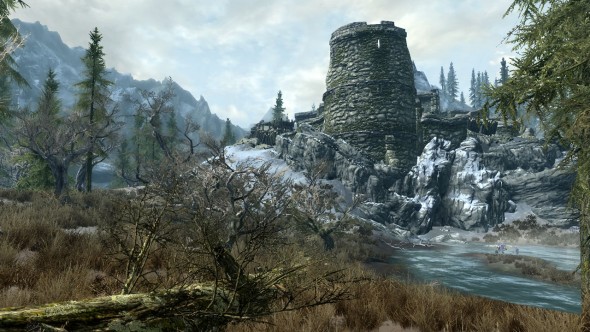 I left the presentation extremely impressed. Skyrim looks like it’s shaping up to be the perfect successor to Oblivion; everything  you loved, with all the improvements you’d hoped for, and plenty of surprises. Expect this one to be one this holiday’s heavy hitters, as it’ll be on store shelves this November 11th. Skyrim, Among Us, and More Are Coming to Xbox Game Pass