A leaked trailer reveals that NIS America is probably publishing Takeyasu Sawaki's The Lost Child in the west.

If you have followed DualShockers over the past few months, you’re probably aware of The Lost Child, a dungeon JRPG directed by Takeyasu Sawaki, whom many will remember as the man behind El Shaddai: Ascension of the Metatron for PS3 and Xbox 360, and the character design of Okami.

Well, looks like it’s coming west, even if we don’t yet have an official confirmation. Today, the following appeared in my mailbox. Basically, it’s YouTube warning me (and anyone else subscribed to the NIS America channel) that the publisher released an announcement  trailer for both the PS4 and PS Vita versions of the game. 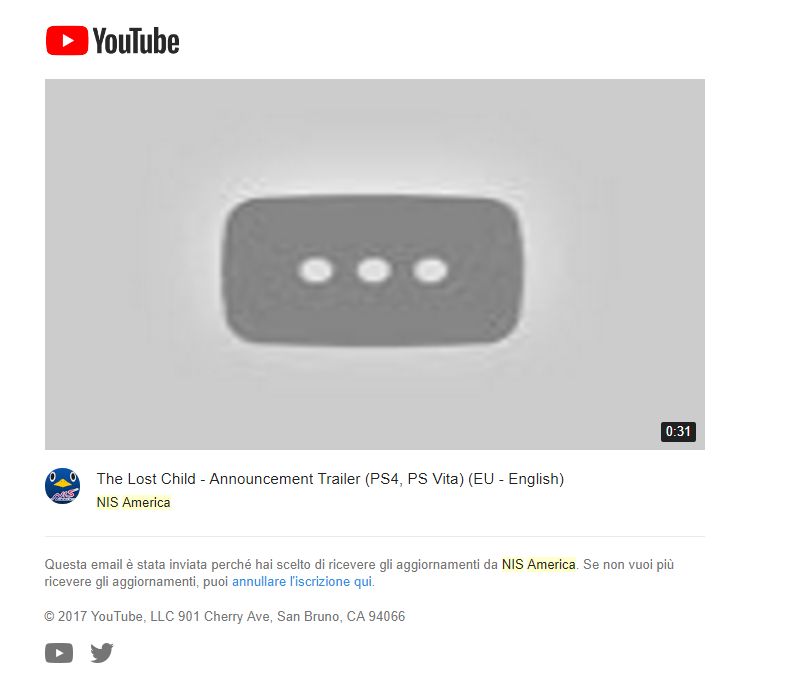 The trailer (which was located at this address) was immediately deleted, but YouTube is a strict mistress, and the cat was out of the bag (and into everyone’s mailbox) before the mistake could be corrected.

Published in Japan by Kadokawa Games, and released on August 24th, The Lost Child tells the story of a journalist named Hayato Ibuki, who finds himself shoulder-deep into a conflict between demons and angels, with fallen angels in the middle.

Having been given a demonic artifact that allows him to subjugate and control astral beings, he goes on a quest to find four obelisks that act as a passage for human souls to the world beyond.

The game is deeply connected with El Shaddai, and protagonist Enoch will also make a comeback, alongside Lucifel.

Again, for now we should be considering this as a rumor until NIS America makes the official announcement, but considering the leaked trailer, it’s a rather solid one.