During Japan Expo Final Fantasy XIV: A Realm Reborn Director and Producer Naoki Yoshida announced that Lightning from Final Fantasy XIII will appear in the upcoming MMORPG , creating quite a lot of controversy between that part of the fanbase that suffers from a serious form of allergy to the character, while others were concerned by the possibility that her inclusion would break the game’s lore.

Yesterday Yoshida-san posted a rather detailed explanation on the beta forums, letting fans know how everything will make sense, and that the guest character won’t be just a clone, but the “one and only Lightning”. He also mentioned the boundaries and rules that the introduction of any further “fanservice” character will have to follow. You can read the full message below.

Thank you for all the feedback and discussion in regards to the collaboration between LIGHTNING RETURNS: FINAL FANTASY XIII and FFXIV: A Realm Reborn that was announced at E3 and Japan Expo. While I was reading over all the comments and writing a post, I thought that there needs to be a clear explanation and decided to create this thread.

The Japan Expo stage is a place where people that like Japanese sub-culture gather and we focused on the below attractive aspects for our presentation:

As a result, I believe there are some of you who are concerned with the implications for the lore of FFXIV: ARR and the world of Eorzea and thought, “Why are you shoehorning Lightning into FFXIV?” or “Is the game just going to be filled with other with FF characters?”

This is the first time we’ve tried having a FINAL FANTASY series character make an appearance in another world in a numbered FINAL FANTASY title. After announcing this at Japan Expo, we will be having a detailed meeting with the LIGHTNING team, but the general consensus between both teams is that “it shouldn’t just be a simple appearance.”

The story that answers these questions is already being created and it will also be related to the Lightning saga. This is not just a Lightning clone showing up in Eorzea; it is the one and only Lightning. We are also creating a lot of character dialogue for Lightning as well as special cut scenes. We’ve established a proper story, and I hope you’re excited to see it.

Also, in regards to future collaborations with other FF series, we will be adhering to the below principles:

For example, “Red XIII” who appeared in FFVII.
I believe we mentioned “Red XIV” as a joke before, but Red XIII has a very rare and specific role in the world of FFVII. If he was wandering around the world of Eorzea it would destroy the image of the world of FFVII, so this can’t happen.
This is just a simple example of what we mean.

Leading up to my involvement with FFXIV, I’ve always been a fan of the FF series just like everyone else. Because of that, I want to keep the lore important and consider the storyline in its entirety, so please don’t be worried when it comes to this.

P.S.
When it comes to Minions, however, we are going to completely run with it.

There you have it, straight from the lion’s mouth. One thing is for sure, whether you like Lightning’s inclusion or not, it seems that the team has thought it over quite deeply before green lighting it. After all if there’s a Final Fantasy game that can accommodate characters from other universes, that’s Final Fantasy XIV: A Realm Reborn, considering that all the characters imported from the original Final Fantasy XIV travel through space and time for five years right at the beginning of the story.

I’m actually quite interested to see what kinds of minions they’ll introduce, considering that Yoshida-san said that they’re going to “completely run with it” when it comes to those. I’m guessing we can expect a Red XIII minion at the very least. 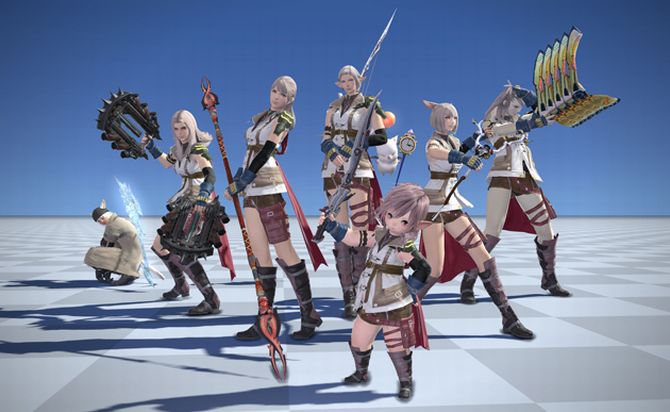