First of all, Yoshida-san showcased the battle challenge available on the show floor at E3 2017. It’s against the primal Susanoo, which is at level 63.

After that, we also saw a a video showing swimming. Some emotes almost work in the water. Diving was also showcased. You dive from the surface with CTRL+Space. Players should turn the active help windows back on when they try the expansion for the first time, since there are many new systems.

The ability to dive requires progressing through the main scenario. Costa del Sol has also been updated for swimming. In the video we also see new mounts and new minions.

The new Eorzea Collection trailer was then shown, debuting plenty of new gear and fashions from Stormblood. We learn that Japanese-style full plate armor will be a reward for the Omega Weapon raid. It’s available for all classes and its classes Genji Armor.

Asked about the white mage changes, Yoshida-san asked that players calm down a bit, and not just about white mage. This is simply because the data we saw from the media tour was from the end of April, and since then a lot has changed. Raid difficulty should be more or less the same regardless of party composition.

There are many reasons for that. One is that the game has already many instanced dungeons (currently 49 for those counting). The second reason is that Allagan Tomestones can be obtained through other methods, so normally there are less players running their duty roulette. Due to that, the resources required by one of the dungeons are allocated to provide a “new experience” instead, for instance a more challenging kind of content.

Implementing a glamour log would be very difficult because, for instance, the load created on server memory could cause crashes when zoning. Hypothetically speaking, it would be possible to implement something to that effect with achievements. For example, by beating Ifrit a number of times, players might get the glamour of the reward via an achievement. Ideas about a glamour log have been brought up very frequently, and the development team has been talking about it, but it will still take some time.

Certain actions are being removed via the simplification process coming with Stormblood, but if there is enough request, their animations might be brought back as emotes. Yoshida Jokingly mentioned a certain Dragoon action that could be used as /poledance.

It would be very easy to mark servers as recommended for roleplayers. In terms of workload it could be done instantly. That said, the team is very torn on doing it. For instance Balmung (which incidentally is the server where I play) is known to be a server popular with roleplayers. While many would be happy to see it labeled as a roleplay server, there are also others who joined that servers with no intention to roleplay, and the possibility that those would feel unwelcome is problematic. This isn’t to say that this will never be done, but the team would like to gather more data on the topic.

Yoshida-san also explained the schedule for the updates after the launch of Stormblood. Allagan Tomestones of Verity will be available from the start with no weekly limit.With the implementation of the new savage mode with patch 4.05, a new looting system will guarantee that at least one person in the party will get a weapon appropriate for his job after completing the content. 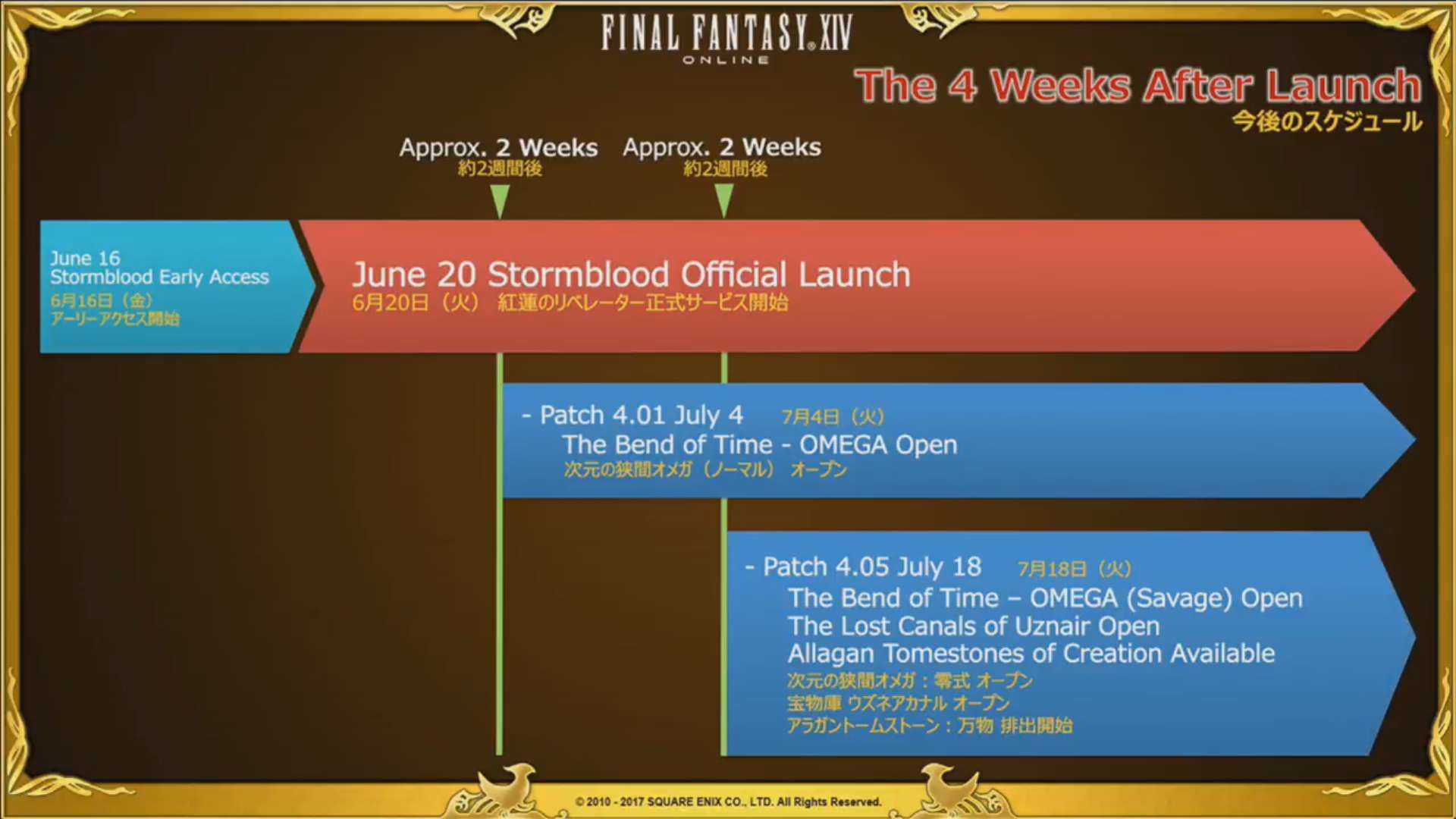 On June 15th, Square Enix will provide information on the new servers and bonuses reserved to those who will want to transfer to preferred ones. Those bonuses include world transfer fees waives, no limitation on gil, keeping your housing and 100% bonus on xp gained up to level 60.

Last, but not least, the Fly the Falcon Mount Campaign will come soon, rewarding players who register a copy of Stormblood and subscribe for 90 days with a brand new airship mount. This, and more campaign to follow will replace the now discontinued Veteran Rewards. 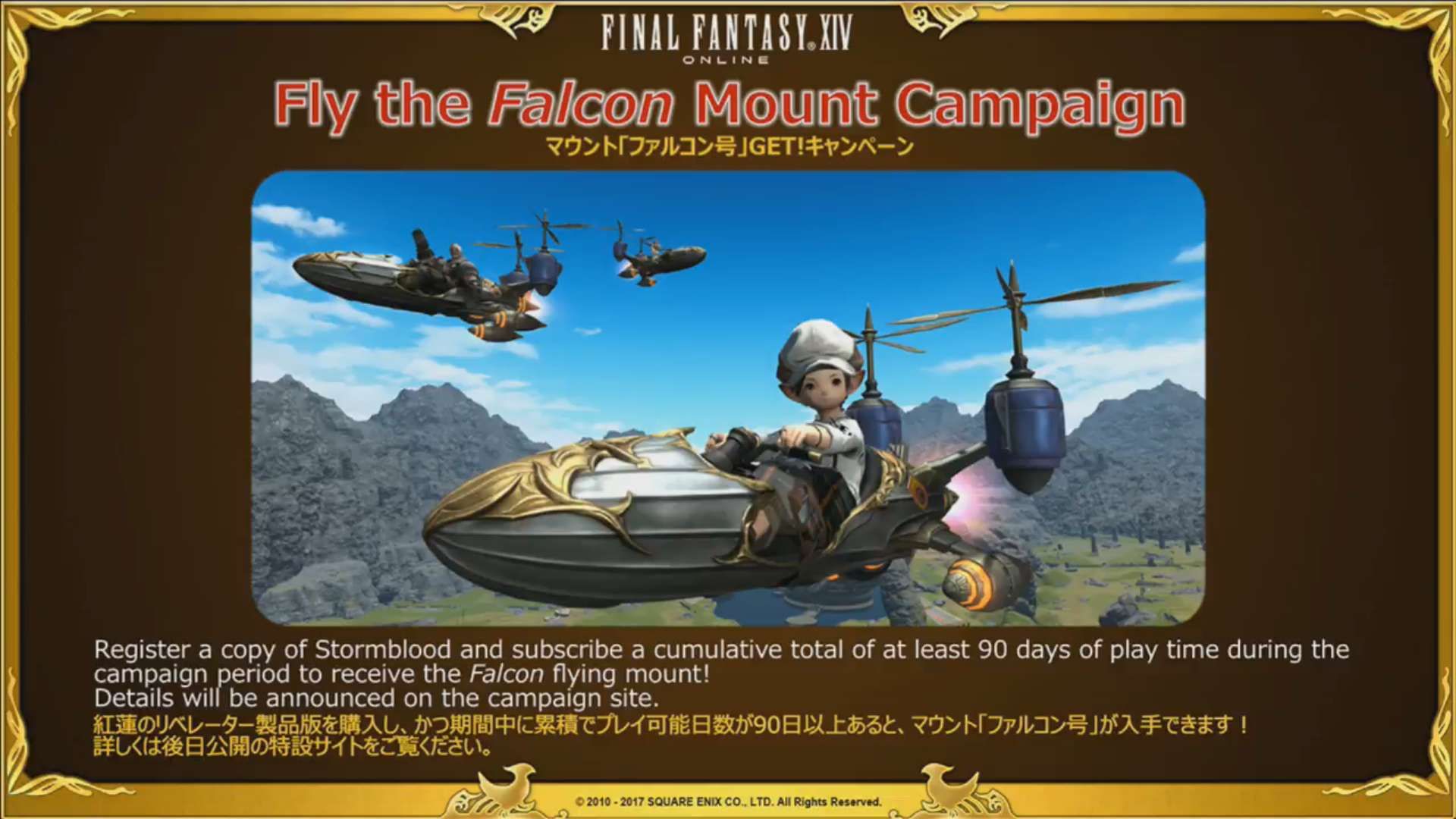 If you want to see more, you can watch Stormblood‘s launch trailer, new footage showing the new city of Kugane, the Ruby Sea (including underwater diving and exploration) and The Peaks, more featuring the the Shisui of the Violet Tides dungeon, listen to the beautiful theme song for the expansion, “Revolutions,” and download the benchmark to test out your PC. Last, but certainly not least, you can read our hands-on preview of the expansion, and our interview with Director and Producer Naoki Yoshida.