During PAX West 2016 in Seattle, I was given the chance to play the very first hour of Final Fantasy XV. As one of the biggest games releasing this fall, if not this year, you may have already watched the first thirty minutes we recorded atTokyo Game show. Save for being able to make my own decisions regarding play style and travel, most everything else is what you saw.

Of course, compressed video can’t match actually seeing and playing a game in person, and I am happy to report that Final Fantasy XV does look impressive playing on an HD TV. The desert climate you begin in, with its vistad stretching quite far into the distance, is detailed and defined. No blurry vaseline effects here. While I played on a PlayStation 4, the Xbox One version was available as well and looked just as good while looking over a players shoulder. 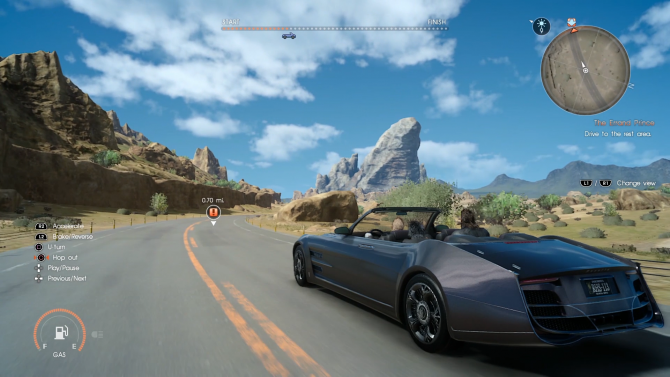 Despite having an hour to play the game I needed more time to fully learn the battle mechanics, as well as the layout of the map. While quantity doesn’t equate to quality, I was interested in spending more time in each town. I wanted to talk more with its residents and check out a modern society mixing with fantasy elements such as dangerous animals and magic.

The main quest line sees you bringing a broken down car to Cindy. While here grandfather Cid repairs it, she sends you on an errand. What begins as eradicating some varmints turns into a missing person search, followed by a mid-boss battle. The escalation of conflict and variety of locations kept me interested in pursuing this quest line to its end. Once finished I was given access to the car, and thus the ability to travel to other towns in the surrounding area. I spent some time cruising through the desert roads, but after reaching my next objective my time had expired. 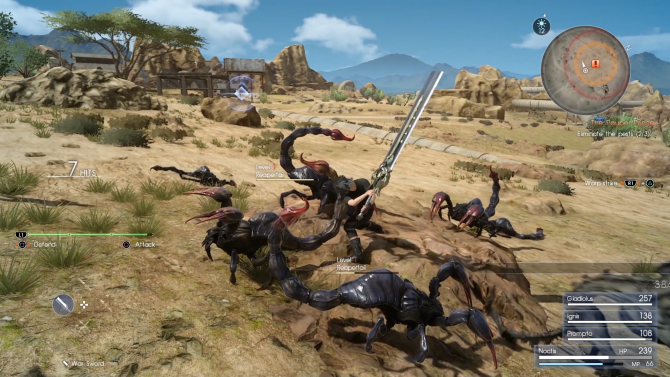 As for gameplay, this version of Final Fantasy XV is very much a significantly upgraded Episode Duscae. For those who haven’t played the demo, Final Fantasy XV‘s combat leans into action while keeping an option to slow things down for those who prefer gameplay closer to the còassic-turn based. When in real-time, you are either tapping or holding the attack button and watching for tells when an enemy is about to strike. You can dodge, or parry correctly for a counter, or warp out of the area when overrun.

You can also choose to swap between your equipped weapons, which in the demo were a sword, spear, and greatsword. The gameplay here is not too dissimilar from Final Fantasy‘s cousin Kingdom Hearts. Although there is far more customization available when it comes to the circular skill tree reminiscent of Final Fantasy X. And equipment, weapon choice specifically, plays a much more active role in your real-time attacks than ever before.

Once over, each battle will grade you based on defense, stealth, and offense. The better your grade the more experience you earn to cash in for AP points that afford you more skills. One small touch I enjoyed was that when sprinting, if you allowed the stamina bar to nearly deplete and let go it will instantly refill. This allows for near endless sprinting, a great asset when exploring the vast expanse of wilderness given. 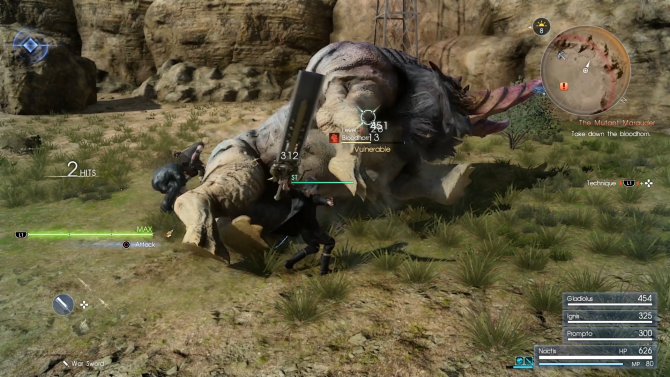 At any point in battle, if the bar tied to L1 is sufficiently filled, you can request one of your partners do a special attack. Depending on the party member this attack may do critical damage or place the enemy into a vulnerable stun mode. It all plays well, and watching Noctis effortlessly phase through enemy attacks when you’re holding the dodge button is very enjoyable.

One of the only issues I ran into was warp attacks. When the prompt appeared I didn’t always make contact with the enemy. Instead I would simply warp elsewhere in the general area. When done from a perch however, the warp attack would always connect. It was only the ground-based warp attack that occasionally failed me, even when I was sure I was locked on. 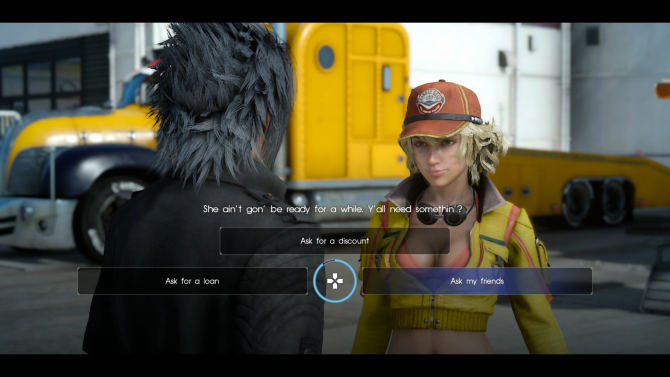 As for the car, don’t expect to go off-roading constantly. The game actually pushes you into your lane if you waver too far out. While the ability to drive the car is a nice try at making you an active participant, you are so limited that you might as well allow Ignis drive as you play with the radio. While in the car you can choose from highlighted tracks throughout Final Fantasy‘s history, ranging from: Final Fantasy I, VII, X, XI and its expansions, XII, XIII, XIV, and Lucian Cruisin. The latter of which I assume plays music from Final Fantasy XV‘s score. Something I would have enjoyed is an in-game radio host that gives updates on current events. This is mainly because I enjoy that form of world-building no matter how repetitive or ham-fisted it can get.

Another aspect that kept me engaged was Noctis’ relationship with Lunafreya, but I’ll let you discover about this on your own. Your pals Gladiolus, Ignis, and Prompto each fulfill a certain role well enough, but in the first hour rarely ventured outside of their stereotype, even if that’s hardly surprising considering that I played only the beginning of the game. Gladiolus is your tough guy, tall and muscular. Ignis is the bespectacled slender tactician. And Prompto is your blonde comic relief. I did think it was charming how Ignis would simply discover a new recipe when his cooking skill reached a certain level. It was as if standing with his hand to his chin he had successfully worked out a mathematical equation to unlock a new meal. Despite their tropes, the banter effortlessly establishes the bond between the four of you. 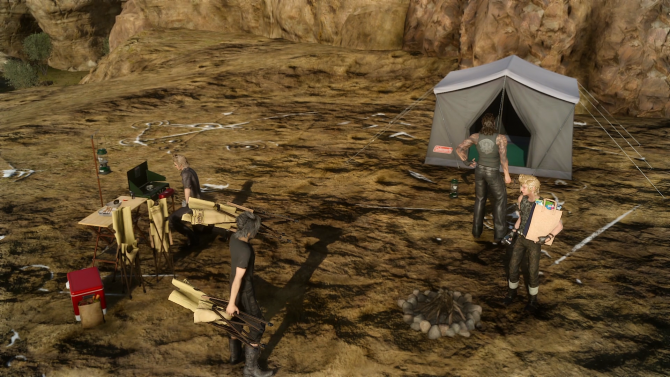 Sometimes during conversations you are given the choice between a few dialogue options. You can even consult your friends for advice on tougher decisions. Of course in the early game the only choices I was making was whether to be kind to the people I met or run errands for a price. I am unsure if there will be any consequence to these dialogue choices beyond the short term.

After playing Final Fantasy XV for an hour I came out more optimistic about the game than ever before. I have always been dubious about the overall quality of the game. This is due both to recent Final Fantasy games failing to engage me, as well as the long and storied development history behind this one.

While I obviously can’t speak to the quality of the final game, I can say that it has a strong opening. With no hand holding tutorial sequence or hallway to be pushed through, it appears this Final Fantasy is aimed squarely at critics of the last major single player entry, Final Fantasy XIII. Whether or not the quality of this first hour can be maintained throughout the game, we will all have to wait and find out come this November, but so far so good.