Fire Emblem Warriors will come out in North America day and date with the previously-announced European release.

Today Nintendo announced the release date of Fire Emblem Warriors in North America, and it’s exactly the same as in Europe.

The game will be released on October 20th, and will have a dedicated limited edition for Nintendo Switch.

It will include three CDs, a dual-sided poster, and a set of 25 character cars, plus the game, obviously.

One side of the poster will be in English, while the other will be in Japanese, and the whole package will cost $79.99.

Fire Emblem Warriors is coming for Switch and 3DS, and you can check out a mockup of the edition below.

If you want to see more of the Nintendo Switch version of the game,  you can also enjoy a new trailer, new screenshots, another recent trailer showing Cordelia in action, one showing Robin using her magic, a video showcasing the bond system, which was also showcased with screenshots. A few days ago, we also got some spiffy gameplay showing the latest members of the cast in action.

Of course, you should not forget to read our hands-on preview from E3 2017. 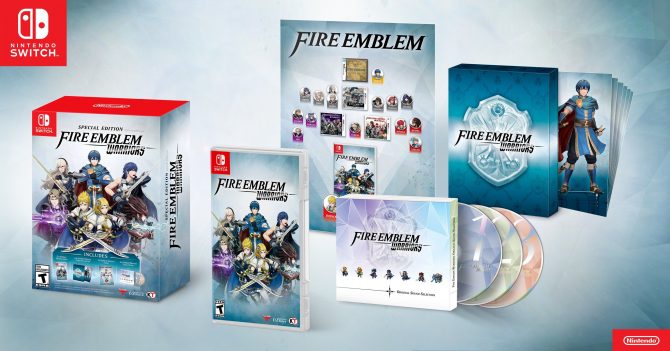