MERJ's Floor Kids is a labor of love and a strong departure from the rhythm genre, which brings some great diversity to the Nintendo Switch indie lineup.

While all games are undoubtedly passion projects to their developers, it is always overwhelmingly clear when you are playing something that the developer regards as their baby. Games like My Dog Zoro’s Linelight or Tom Happ’s Axiom Verge are clearly labors of love and — despite faults the underlying game may have — it is hard not to respect the baked-in passion. Anyone trying their hand at 90’s inspired Floor Kids for Nintendo Switch will easily be able to see how the unique title falls squarely in with that company.

Set on inner-city streets (let’s just assume Bronx, New York), you play as a crew of bboys and bgirls as you work to unify the city under one dance banner. As you work through the city and master your moveset, you unlock different members of your crew and — in turn — new moves, new music, and new strategies for bumping up your high score.

The concept of breaking (breakdancing for the uninitiated) is a unique take on rhythm — a series that is notably prone to repetition. While most rhythm based games like the Just Dance series or the Hatsune Miku series will focus on the sole idea of music for music’s sake, developer MERJ introduces a lite story, characters, and motivation to keep moving your character forward.

More impressive than the brief story components of the game is the sketch-based artstyle. Much less crude than Drawn to Death‘s take on a middle-school teenager’s notebook sketches, Floor Kids look like a more-detailed Cyanide and Happiness comic. This isn’t even limited to the characters, also including backgrounds, comic book-esque cutscenes, and the dance moves themselves. 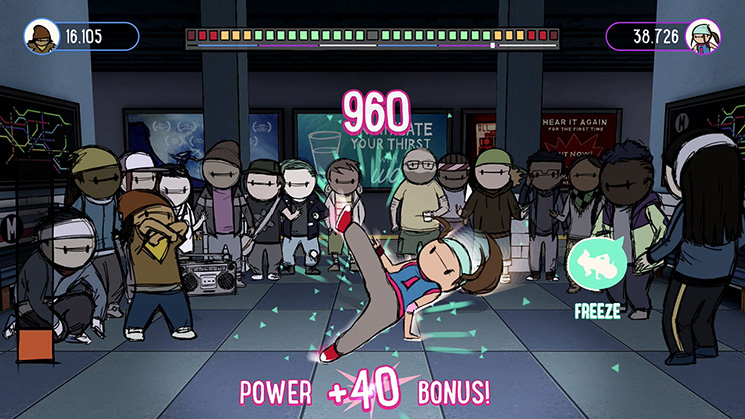 And those visuals don’t act as the sole standout of Floor Kids, because it (thankfully) has a great soundtrack to boot. As you would imagine, any rhythm-based game needs a solid beat to drive interest. And thanks to developer MERJ partnering with Kid Koala, there is more than enough excellent tunes to serve the audience to. And while your foot will be tapping to the beats in the game, none of the trackers particularly stood out to me — at least, not enough to make it onto my Spotify playlist.

With all of that said, the only significant stumble — and it is a reasonably large stumble — is the actual gameplay. As compared to other dancing titles like the late-and-great Dance Dance Revolution, Floor Kids aims to empower the player to make up their own dance move. While you are prompted to stay with the beat of each song, Floor Kids is the jazz to rhythm games’ classical format. You simply dance however your heart desires, and you build your high score based on your ability to diversify your repertoire, respond to crowd requests, chain combos that fall outside the standard moveset. 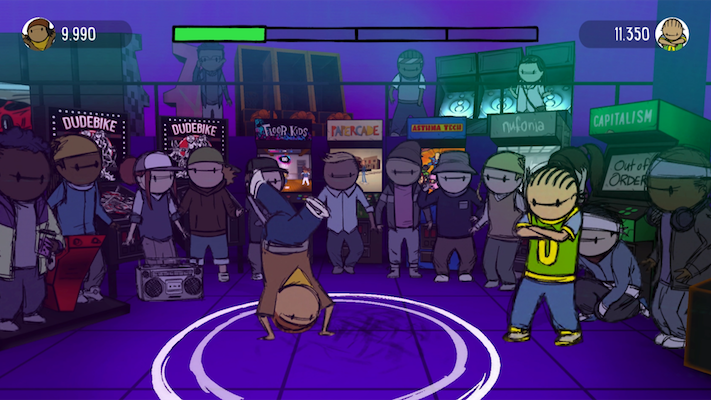 Well, at least for most of every song. Each track is broken up to two segments: the freestyle portion, as well as a more traditional beat-matching component. Unfortunately, my experience with the beat-matching parts were 50/50 on the Nintendo Switch. I’m unsure if it the stiff face buttons to the hardware, or select delays with the game itself. However, I would frequently find myself somewhere between landing the beats exactly or being a millisecond off with no noticeable performance difference.

My biggest concern is there seems to be no middle-ground when it comes to technique. In the beginning, most people will be using a rhythmic button-mashing approach with Floor Kids but, as they get better, they will settle into a groove (excuse the pun) often repeating the same patterns to different beats. In that respect, the game never truly encouraged experimentation in any practical way, and I defaulted to a strategy with each song to maximize my points. 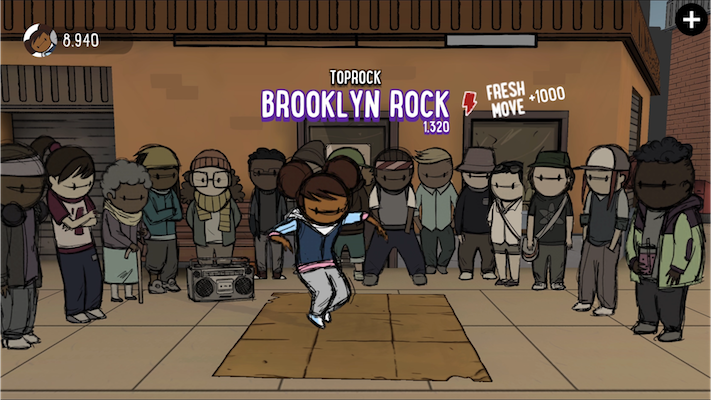 The only time this becomes a more profound challenge is the PvP mode, where you have to go up against another player in local competitive multiplayer. Despite a strategy working with you through the bulk of the game, you will be going after another person’s best moves (or expert button-mashing abilities) in a head-on-head dance-off. While this doesn’t add a ton of depth to the game, I’m never a person to balk at included local multiplayer.

Finally, there are almost-obvious features that Floor Kids could have included to offer more replayability. Not even counting more creative modes, the game feels like it is sorely missing a Practice Mode, Online Play, leaderboards, or collaboration with licensed music. However, according to a recent Reddit AMA with the studios in charge of bringing this to life, those may not be too far off in development.

Floor Kids for Nintendo Switch is not without its faults, thanks to gameplay that puts a little too much faith into in-game exploration. However, it shouldn’t be lost in everything else that Floor Kids has to offer, namely a distinguished art style, a fresh take on a genre, and beats to mash it up. If you are a fan of passion projects, Floor Kids is going to be right up your alley. Floor Kids gets update 1.6.0 for Nintendo Switch, adding much-requested features and fixing the more notorious bugs that stop your groove.