Friday the 13th: The Game Gets Roadmap Detailing Future DLC Friday the 13th: The Game Gets Roadmap Detailing Future DLC

Friday the 13th: The Game has been given a new roadmap showing off all the upcoming content coming to the game, including single player mode.

Illfonic and Gun Media, developers of Friday the 13th: The Game, gave fans a look at the studios’ plans in regards to upcoming DLC that’ll be released over time. In a post over on the game’s official forums, a roadmap detailing all of the upcoming content headed to it was revealed.

The map shows a few things we already know about, for instance the Jarvis House map, the Spring Break 1984 costume pack, and a costume for Jason from the fourth film in the series. You can check out all of the revealed content down below: 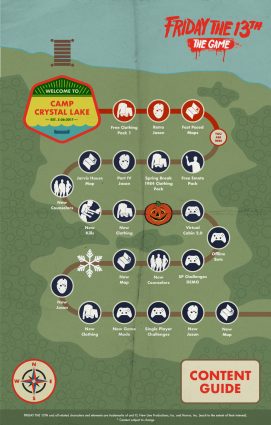 With three downloadable content checkpoints reached, we can expect to see seven more by Halloween, five more by Winter, and six more after that. The major expansions, including a new map, a new game mode, and single player challenges are all parsed out after Winter; whereas pre-Winter contains more cosmetic additions.

Fans should be pleased to see that there’s a lot more in the works for Friday the 13th. Many fans were skeptical after Illfonic announced they’d be focusing on developing their new title, Dead Alliance. The developer reassured fans that their other projects would not effect Friday the 13th.

If you don’t know about Friday the 13th: The Game, it’s a Dead By Daylight-style survival horror title where one player spawns as Jason on a map and the rest of the players need to run and hide from him. If you want to try it out for yourself, the game is available now on PC, Xbox One, and PS4.