Frosthaven continues to batter the Kickstarter record books, jumping into third place all-time among the site's most-funded board games.

Cephalofair Games’ latest epic board game Frosthaven has been an unmitigated success since launching early last week. It smashed through its initial funding goal in seconds and broke $2 million in just under two hours. Since then, the train has barely slowed down. With still three weeks to go, Frosthaven passed The 7th Continent reprint to sit in third place onKickstarter’s most funded  board games. Its been pretty incredible to watch. 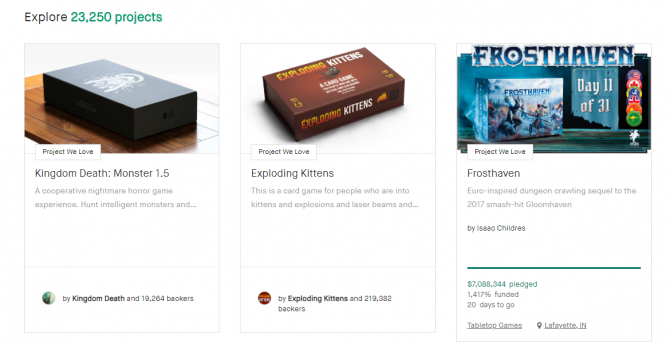 With the way things are currently tracking, it should easily pass Exploding Kittens for second place. First place might be just a bit out of reach. Technically, Frosthaven is on track to fund at around $24 million; however, those numbers are usually skewed by gigantic first day sales. That said, it’s definitely possible for Frosthaven to top Kingdom Death: Monster 1.5‘s $12 million, it’s just going to be a very tough task.

Regardless of where it ends up landing on the Kickstarter charts, Frosthaven is shaping up to be a monster of a board game. The box was already jam-packed with content, but designer Issac Childres announced yesterday that he’s adding even more. Now, every copy will come with cardboard standees for each playable character along with their plastic minis. Plus, summons are getting their own standees now too.

As someone who played quite a bit as a summoner class in Gloomhaven, that’s awesome news. In Gloomhaven, you just used cardboard discs to represent your minions. So, whether I had a pack of wolves or a stone golem, they always looked the same. Childres only gave us a peek at three of the summons’ standees, but they already look amazing. I can only assume some of the hidden classes will have truly stunning standees. Of course, we’ll have to wait for the game to hit our tables before we’ll know for sure.

Frosthaven is live on Kickstarter right now. The campaign lasts another 20 days, giving you three weeks to make your decision. Cephalofair is also letting people back at the $1 tier and still get access to the pledge manager. That means you back at the lower price now and then increase it later when funds are available. It’s a welcome move for many gamers who don’t have as much exposable income during the ongoing coronavirus pandemic. The 7th Citadel is the latest massive Kickstarter success for Serious Poulp. Sadly, you'll have to wait until May 2022 to play it. Frosthaven is the Most Funded Board Game Ever on Kickstarter