No, Kratos’ Son in God of War Is Not Tyr (Or at Least it’s Not Written on His Tattoo) No, Kratos’ Son in God of War Is Not Tyr (Or at Least it’s Not Written on His Tattoo)

Yesterday, a rumor started on NeoGAF, mentioning that the identity of Kratos’ Son in the upcoming PS4 exclusive God of War could be Tyr, Norse god of War, Law and Heroic Glory.

The theory is certainly fascinating, and the effort to prove it is commendable, but it is unfortunately incorrect, and since it’s starting to circulate on a few website as news/rumor (for instance here, here and here), it’s time to bring the proverbial axe on it before it ends up being misleading for many.

While NeoGAF is certainly home of bright minds that do find out a lot of interesting details that normally escape the public eye, it’s always a good practice to actually verify the information before publishing it, and quite evidently, some didn’t.

First of all, let’s examine the theory itself, which is based on two main points: first of all, in the reveal gameplay trailer of the game, the NeoGAF user sees the word “Tyr” written on Kratos’ son’s arm, behind the words “Strong Arm,” with a stray S in the middle.

Secondly, he believes that the arrow-shaped icon shown in the UI is a Tiwaz, a rune associated with Tyr himself.

While, again, the theory is fascinating, that’s simply not a Tiwaz. Even in its stacked form, that you can see below, the Tiwaz rune looks nothing like that. On the other hand, you can clearly see the fletching at the bottom of the icon, indicating that it’s simply an arrow, which matches the fact that the symbol on the right is clearly an axe.

The part of the theory that appears most solid at first sight is the tattoo on the kid’s arm. Unfortunately, this is also fairly easy to identify as incorrect, as it misses the fact that the tattoo quite evidently continues under the leather straps covering the kid’s wrist. I actually translated the full tattoo back when the trailer was released.

The runes on the tattoo are in Elder Futhark, which is the oldest form of runic alphabet used between the 2nd to the 8th century. The language appears to be Old Norse.

The “Tyr” theory correctly identifies the first part of the wording that runs along the forearm as “Strongarm.” It reads “Stjrkrarmr” which indeed means “Strongarm” in Old Norse. The problem is that the second part simply does not say “Tyr.” What the NeoGAF user identified as “Tyr” is simply the “tjr” of a second “Stjrkrarmr,” partly covered by the leather straps.

By looking at the tattoo from a better perspective, it’s very easy to notice the “mr” that completes the second repeat of the word between the straps. There is no “Tyr” in there. It’s simply “Stjrkrarmr-Stjrkrarmr,” separated by a punctuation mark, which is a customary form of word separation in runic inscriptions. 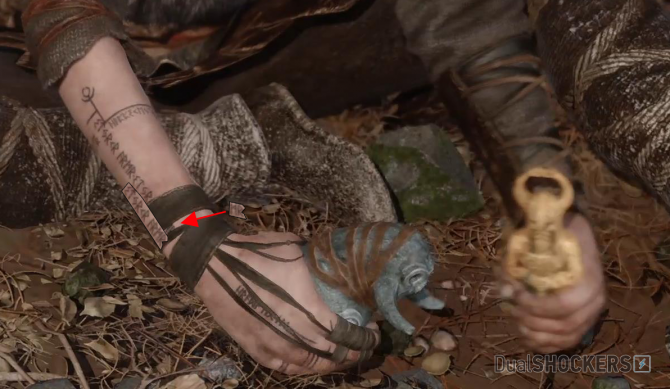 “Stjrkrarmr” isn’t the only repeated word in the tattoo. The inscription that wraps around the forearm is another case of the same wording repeated. As you can see in the  picture below, the wording “happskejtr” (which means lucky arrow” or “luck with the arrow” in Old Norse) is repeated multiple times like a litany. 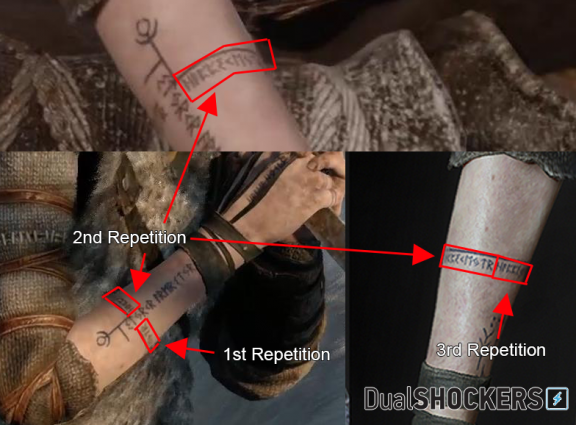 The third inscription, on the back of the kid’s hand, reads “hrada hond,” which means “quick hand.”

In conclusion, the tattoo does not indicate Kratos’ son’s name. It’s simply a ritualistic inscription summoning strength, luck and speed.

This is not to say that Kratos’ son can’t be Tyr. Given the little we know at the moment, he could be pretty much anyone, but you won’t find his name on his tattoo, or his identity on the UI.

We’ll probably learn of the identity of Kratos’ son sooner or later, even because Director Cory Barlog promised to reveal it before the release of the game. Considering that Barlog mentioned in October that he was struggling on deciding his final name, the kid might not be a famous mythical personage at all. Sony Santa Monica introduces the Revenant, another of the rather terrifying undead creatures that Kratos will have to face in God of War for PS4.