A Change.org petition has amassed a large following in response to the closing of GTA V modding tool OpenIV.

Grand Theft Auto has long been a series that allowed users to express their creativity in the form of mods for the series’s single-player mode. Recently, the author of the popular modding tool OpenIV received a cease and desist letter from publisher Take-Two Interactive. The creators of other modding tools, such as “Menyoo” and “Force Hax,” have received similar letters, however these modding tools were being used specifically to influence Grand Theft Auto V‘s multiplayer mode. In response to the modding purge, fans of OpenIV have taken to Steam, Google, and Change.org to voice their frustration.

On Thursday, the OpenIV lead developer took to gtaforums.com to announce that OpenIV would be complying with the cease and desist letter from Take-Two Interactive:

“Going to court will take at least few months of our time and huge amount of efforts, and, at best, we’ll get absolutely nothing.
Spending time just to restore status quo is really unproductive, and all the money in the world can’t compensate the loss of time.”

And while it seems that OpenIV modders encouraged the team to fight, and may have been lumped into the sum of modding tools that alter the game’s code, the team behind OpenIV recognized the futility in entering a legal battle with the publishing titan:

“So, we decided to agree with their claims and we’re stopping distribution of OpenIV.”

“It was a hard decision, but when any modding activity has been declared illegal, we can’t see any possibilities to continue this process, unless top management of Take-Two company makes an official statement about modding, which can be used in court.”

In the hopes of delivering a message to Rockstar Games and Take-Two Interactive, fans of the OpenIV modding tool have amassed over 40 thousand signatures on their Change.org petition. The petition states that thousands of players have both lost the ability to mod their game and to pursue their passion for single-player modding:

“Myself, and other members of the LSPDFR and GTA modding community ask that OpenIV be allowed to continue distributing and running as a modding software, and that the modding of the Grand Theft Auto series, including SA, IV, and V be deemed legal again as Rockstar Games has said in the past.”

On Steam, recent user reviews indicate an “overwhelmingly Negative” ranking for the game, as well as “mixed” reviews overall. Only 14 % of the 35,960 user reviews in the past 30 days have been positive. 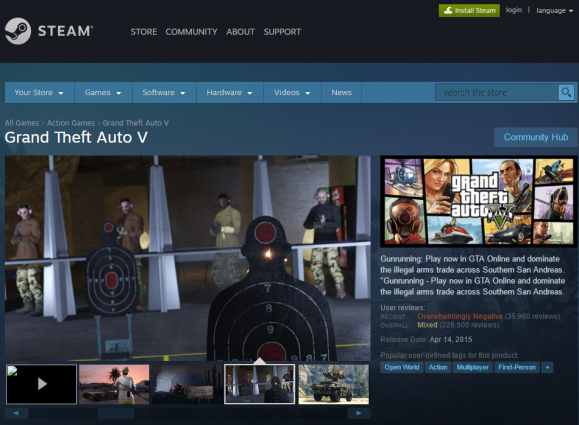 Users are down-voting GTA V like crazy. Never mess with the mods 🙂 pic.twitter.com/EOIVIOVimb

It should be clear that though the modders who make use of OpenIV may not be using the tool to impact the experience for other players online, the shutdown of modding tools by Take-Two Interactive does not distinguish between the tools that affect the multiplayer experience and those that do not. We will be following the story for updates concerning the closing of GTA modding tools, as well as possible statements to come from Take-Two Interactive. Take-Two Interactive and Rockstar have filed a new patent for NPCs that further suggests that GTA 6 is in development.