Guacamelee! 2 is a Bigger and Bolder Lucha Libre Adventure Guacamelee! 2 is a Bigger and Bolder Lucha Libre Adventure

Juan is back in the fight as we take a look at DrinkBox Studios' upcoming Guacamelee! 2 in a new hands-on demo from PAX East.

When it comes to new creative takes on “Metroidvania” style gameplay, DrinkBox Studios’ Guacamelee! was among one of the most creative in the genre with its inspirations from Mexican culture and luchador wrestling. Thankfully, the game’s unique take on the style of gameplay from Metroid and Castlevania didn’t go unnoticed, and with the upcoming Guacamelee! 2 coming later this year, players will get to unleash their inner luchador once again.

During this weekend’s PAX East 2018 in Boston, we had the chance to go hands-on with Guacamelee! 2 for a new look at the upcoming sequel. The demo we played showed about 15-20 minutes of gameplay from early in the game (around the game’s second chapter, according to DrinkBox), and from what I played, it’s the Guacamelee! that you (likely) know and love, but with plenty of refinements and additions to make it a welcome return to DrinkBox’s colorful, kooky world. 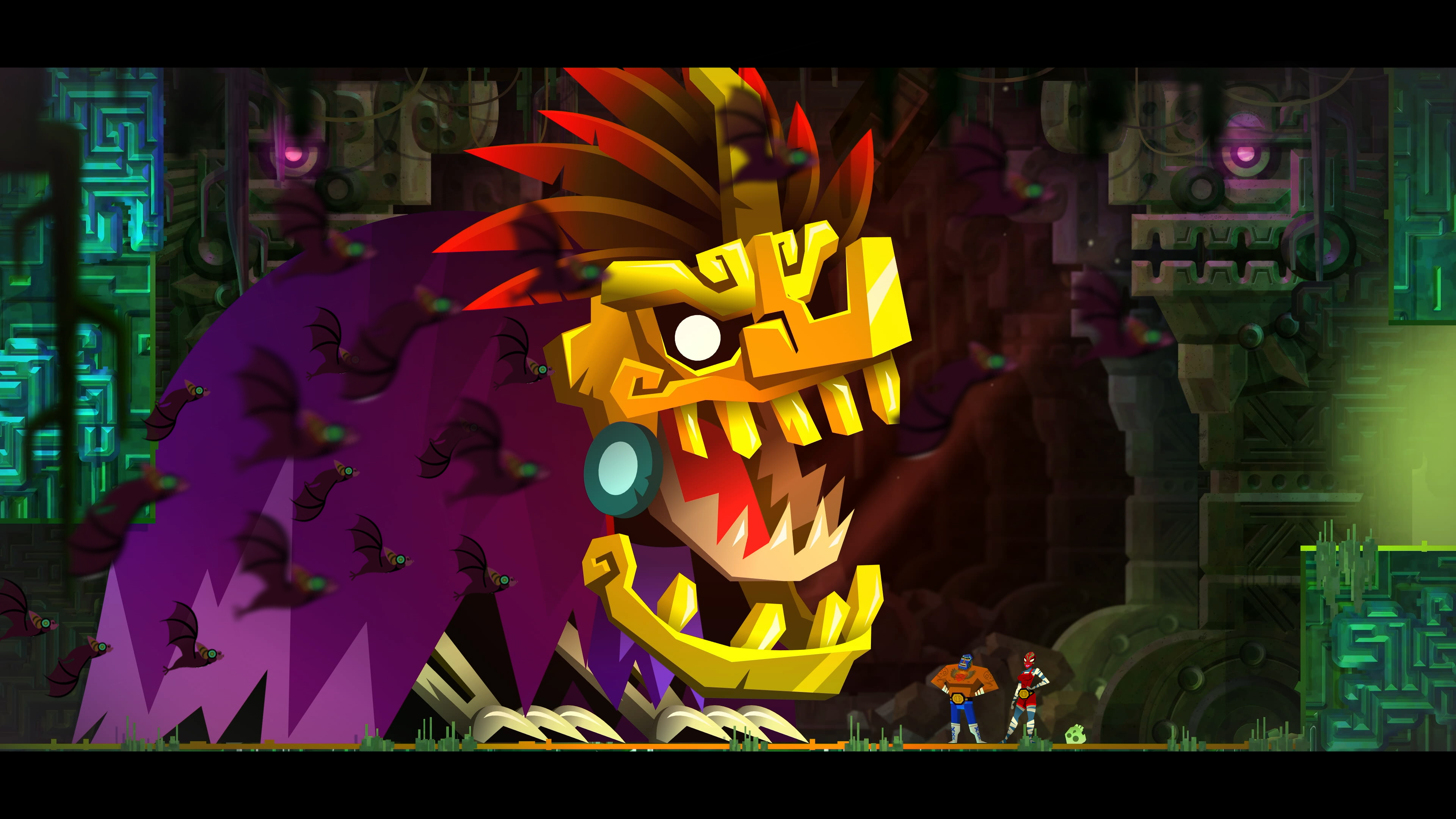 “This time around, Juan has to come out of retirement to face a new threat that threatens to destroy all of Mexico.”

Much like the first game, Guacamelee! 2 is a Metroidvania-style adventure/platforming title, where players explore various colorful Mexican-styled vistas and landscapes in Juan’s newest journey that transcends the worlds of the living and the dead. Guacamelee! 2 picks up some time after the original game, with about seven years having passed since the masked luchador Juan rescued the daughter of El Presidente from the grasp of the skeletal Carlos Calaca. This time around, Juan has to come out of retirement to face a new threat that threatens to destroy all of Mexico and more, which is where Guacamelee! 2 picks up on its new adventure.

For those that played the original game back when it released in 2013 (or its subsequent Super Turbo Championship Edition), the foundation of Guacamelee! 2 is still a satisfying blend of exploring the game’s lush environments and fighting enemies. However, the game’s visual presentation and some intriguing new platforming elements have been implemented to expand on the original’s Metroidvania-inspired gameplay. 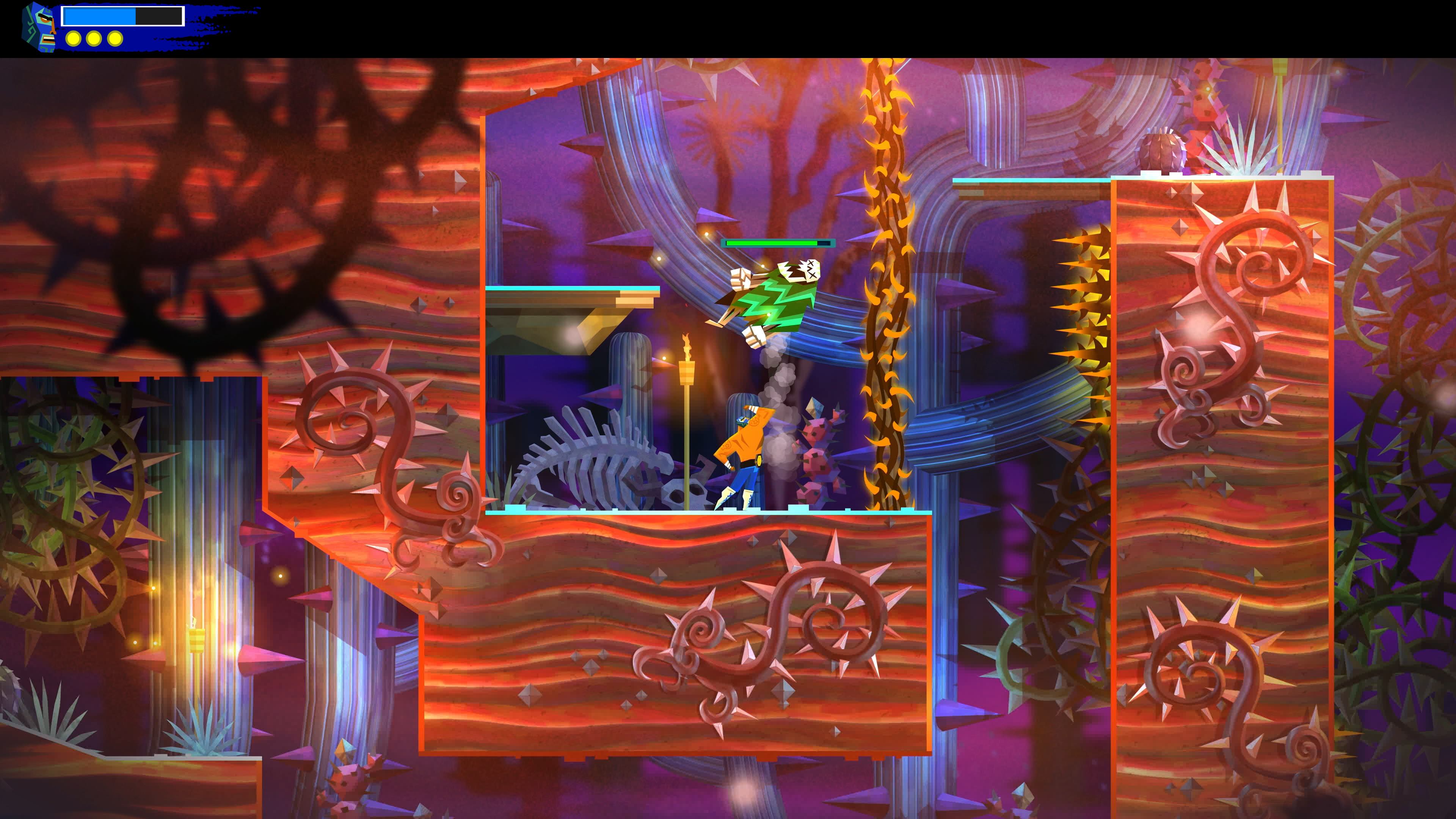 “Guacamelee! 2 is still a satisfying blend of exploring the game’s lush environments and fighting enemies.”

One of the best examples of this is an expanded use of Juan’s ability to turn into a chicken. While this mechanic was implemented in the first game in select areas and stages, this time around players will be able to swap between Juan’s luchador and chicken forms to get into hard to reach areas, not unlike Samus’ morph ball in the Metroid games. However, the chicken form also provides players with the ability to glide to far off platforms, while players can also gain new abilities like a gigantic chicken form and a powerful dive attack that can power through blockades into new areas. You could, theoretically, play a good amount of the game as the chicken and even take on enemies, though DrinkBox said that certains area will still require Juan’s abilities from time-to-time.

While the combat feels as satisfying as ever in Guacamelee! 2 (especially when playing with friends in co-op) as it did in the original game, the sequel seems to be putting more emphasis this time around on platforming and level design meant to challenge players’ skills and reflexes. There were more than a few areas that took me a few tries to try and complete (and multiple deaths as a result of them), but I still loved the sense of exploration that Guacamelee! 2 provides thanks to its unique tone and setting. Even when things got difficult, I didn’t necessarily feel frustrated or punished by the game, which feels refreshing in an age of brutally-difficult platformers. 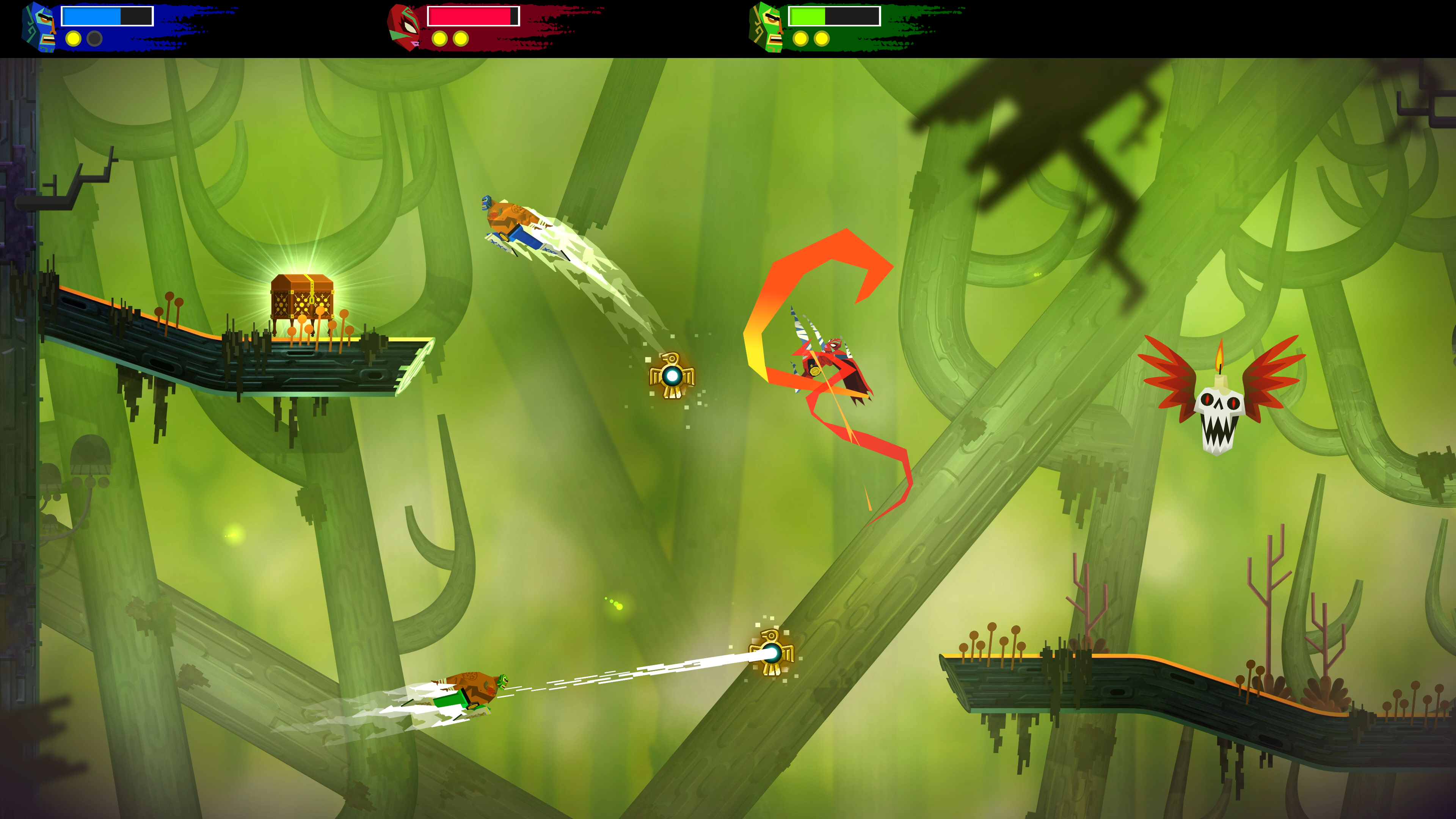 “While the combat feels as satisfying as ever in Guacamelee! 2 as it did in the original game, the sequel seems to be putting more emphasis this time around on platforming.”

Guacamelee! 2 also gives players (whether as Juan or the other supporting characters) some new moves and abilities that add to the game’s brawling combat style and exploration. Specifically, that includes a new “Eagle Boost” ability that functions somewhat like a grappling hook, giving Juan and other characters the ability to boost themselves over long distances or to sling to enemies high up in the air. Like with the first game, the beauty of the abilities is their function in both combat and exploration, and DrinkBox looks to continue that tradition by making each new ability feel as much like a tool as they are functional for combat.

Aside from the players’ abilities steering the exploration, platforming, and combat, our demo of Guacamelee! 2 also showed some interesting new environmental challenges and obstacles that players will have to surpass along the way. One of these included areas that are sort of “merged” between the realms of the dead and the undead, as I had to guide Juan between paths of light that revealed specific platforms and hazards to get through an environment. That new environmental challenge alone added another layer of challenge, as I not only had to pay way more attention to the level as it was shifting and changing, but also had to be attentive to the timing and precision needed to make it through these more challenging obstacles. 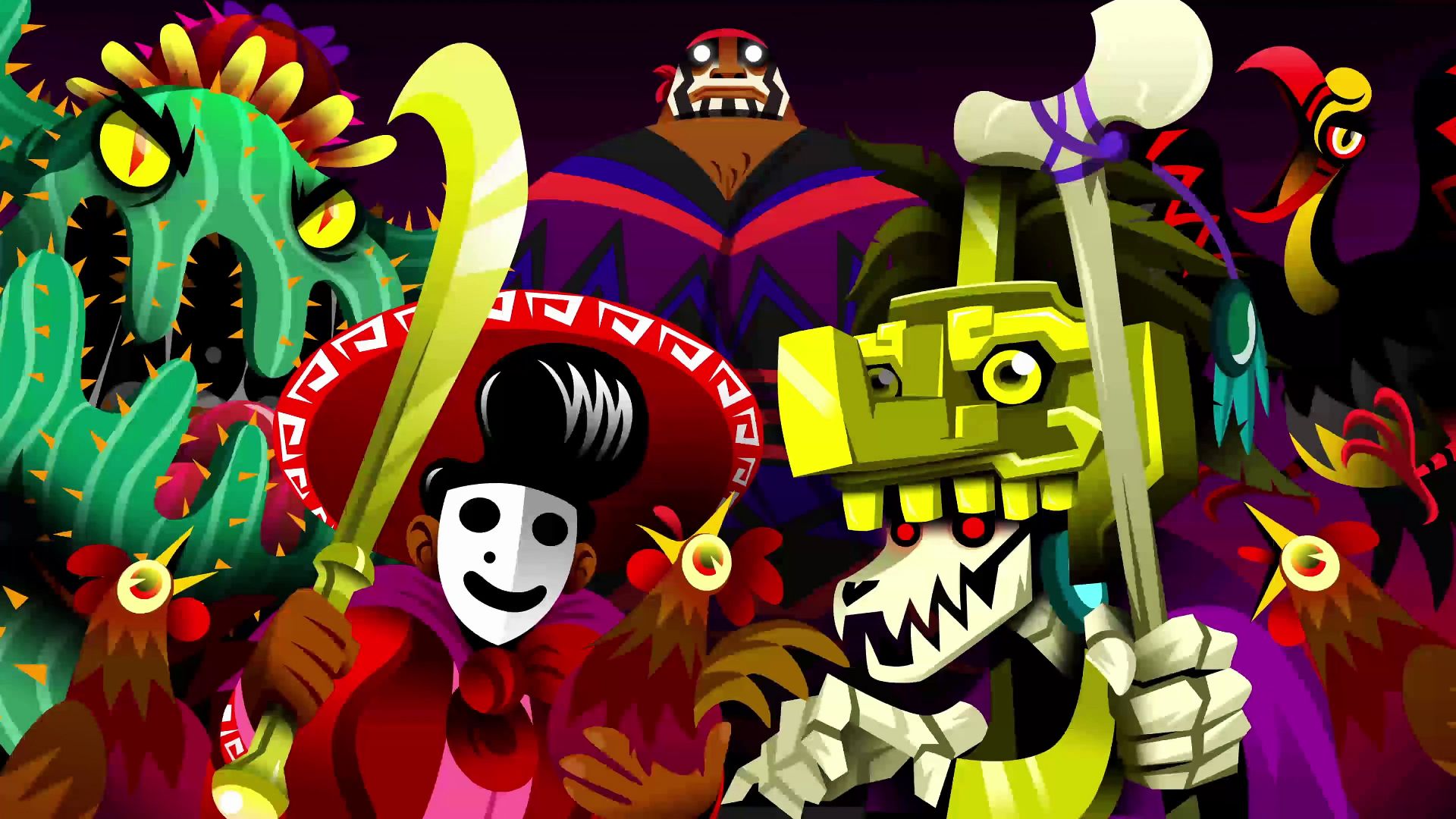 “Guacamelee! 2 is taking what worked with the original and amping it up to an even greater degree.”

Aside from the gameplay, the visuals of Guacamelee! 2 — which was one of my favorite aspects of the first game — still maintain their striking sense of color and life, with a few noticeable upgrades. The various locations set between the worlds of the living and undead still pop with vibrancy and color, though this time around in Guacamelee! 2, the game has almost a 2.5D look, as the backgrounds have more detail to add to the sense of the epic Mexican journey that players will take on. While the game will support visual enhancements on the PS4 Pro, Guacamelee! 2‘s unique visual style and artwork I think will still be striking regardless of whether you’re playing on a base PS4, the PS4 Pro, or PC.

When I played the first game on the Vita back when it released, Guacamelee! took me by surprise for its deep adventure and exploration mechanics wrapped up in Mexican-styled flair and humor, and I’m happy to see that Guacamelee! 2 is giving more of that and then some. While we only played a small part of the final game, it was clear from playing Guacamelee! 2 that the sequel is taking what worked with the original and amping it up to an even greater degree, and I’ll be looking forward to hopping back into the ring with Juan again.

Guacamelee! 2 will release for PS4 and PC this summer. Stay tuned for our upcoming interview with DrinkBox Studios co-founder Graham Smith for more on the direction and story elements players can expect from Guacamelee! 2. Wormhole Wars manages to execute both the good of the Halo and Portal franchises, by implementing several notable features to redefine competitive FPS games. Frostpunk is a Complex City-Building Sim with a Fascinating, Frozen Setting