Ex-Valve employee and writer on games that include Left 4 Dead. Half-Life and Portal, Erik Wolpaw has made his return to Valve once again after a fan noticed his name in the credits of Artifact

According to Valve boss Gabe Newell, Erik Wolpaw has made his long-awaited return to Valve. Erik had previously worked on Half-Life episodes 1 and 2, Portal, and Left 4 Dead as a writer before leaving the company in 2017  to take up employment at Double Fine, but now he appears to have returned to Valve. Jay Pinkerton had also joined Wolpaw in leaving Valve but has since made his return.

An email from Gabe Newell is making the rounds all over social media. A fan made contact with Mr. Newell after spotting Erik Wolpaw’s name in the credits of Artifact and to his surprise, I’m sure, he actually got a reply back from the man himself! Valve News Network has since contacted the fan and confirmed the email’s legitimacy. 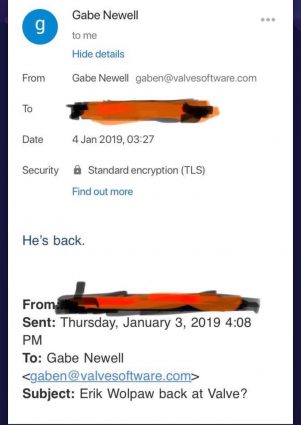 Why Erik left in the first place is obviously under debate and rumor, but it could well be due to the lack of games Valve where producing at the time with the last one being Portal 2 although now, it looks as though they are on the up as they also acquired Firewatch developer Campo Santo last year with the gang working on Valley of the Gods.

In the Valley of Gods Announced by Campo Santo at The Game Awards; Coming 2019

There’s no word at this time of writing what they are working on next, so don’t get too excited on a possible Half-Life 3 or Left 4 Dead 3 or Portal 3 – although I will always passionately hold out hope for Left 4 Dead 3! – but Gabe Newell had stated last year that “Artifact is the first of several games that are going to be coming from us. So that’s sort of good news. Hooray! Valve’s going to start shipping games again.”

Polygon got in touch with Erik Wolpaw today to shed a bit more light on what exactly his position is with Valve with the response being is that he is there in a “contractual capacity”. Erik wrote in an email that:

“I’ve had a contractor agreement with Valve since the day I stormed out and then immediately timidly stormed back in to ask could I please have my old job back and they said no and I was like good because I’m too busy to work for you anyway and they said but you can be a contractor and I said oh thank god okay I’ll do that.

I’ve been helping Pinkerton and Jaros and Vanaman whenever they need it. It’s been busier on that front lately, but I’m not currently a full time employee. My main gig is still delivering juice for my niece Jodi’s vegan juice shop plus an unpaid internship playing Slay the Spire three hours a day.” Artifact continues to lose its player count and now has a reduced development team as its lead designer has been laid off. Valve’s Artifact Continues to Bottom Out, Struggling to Even Hit 1,000 Concurrent Players a Day Players Can Mute Opponent’s Chat During Matches in Artifact