I attended a hands-off demo walkthrough of Borderlands: The Pre-Sequel while at ye old PAX East. I’m normally not into these type of demos but I still checked it out because something compelled me to. My instincts were right because this was one of the better game demos that I’ve seen at the show.

The game takes place between the original two Borderlands games and is located on Pandora’s moon. The low gravity of the moon is actually the biggest selling point of the game because it radically changes the gameplay. Movement is a bit slower, especially when jumping, but this in turn created new gameplay opportunities for players to explore.

Due to the moon’s gravity, if you use an explosive on an enemy they will be sent flying off into space. Bullets are also affected by the gravity and their power can actually increase depending on how high or low you are to enemies. A new downward smash type move is now available for when you’re jumping and it’s useful for stunning or killing enemies. Platforming also utilizes the low gravity and you’ll need to use some of your oxygen supply in order to cross certain obstacles throughout the game.

On the visual front, this is pure Borderlands. The game has the stylized, cell shaded look that makes this series instantly recognizable to anyone who sees a screenshot of it. The demo I saw took place on a region of the moon which had volcanic fissures in it and the colors produced from it went nicely with the blue-white of the moon. The planet of Pandora was constantly in the air and it had an aurora effect around it which also enveloped the moon. Truth be told, this game is not a radical departure for the series when it comes to its graphics but that isn’t exactly a problem.

The game was actually the brainchild of 2K Australia. The team, who has worked on every Bioshock game, were big fans of Borderlands and they wanted to create a new entry in the series which captured the essence of the original games while, at the same time, introducing something fresh. They were given a lot of room to do what they wanted and even created things all on their own such as a new ice gun that can freeze enemies who can then be shattered. 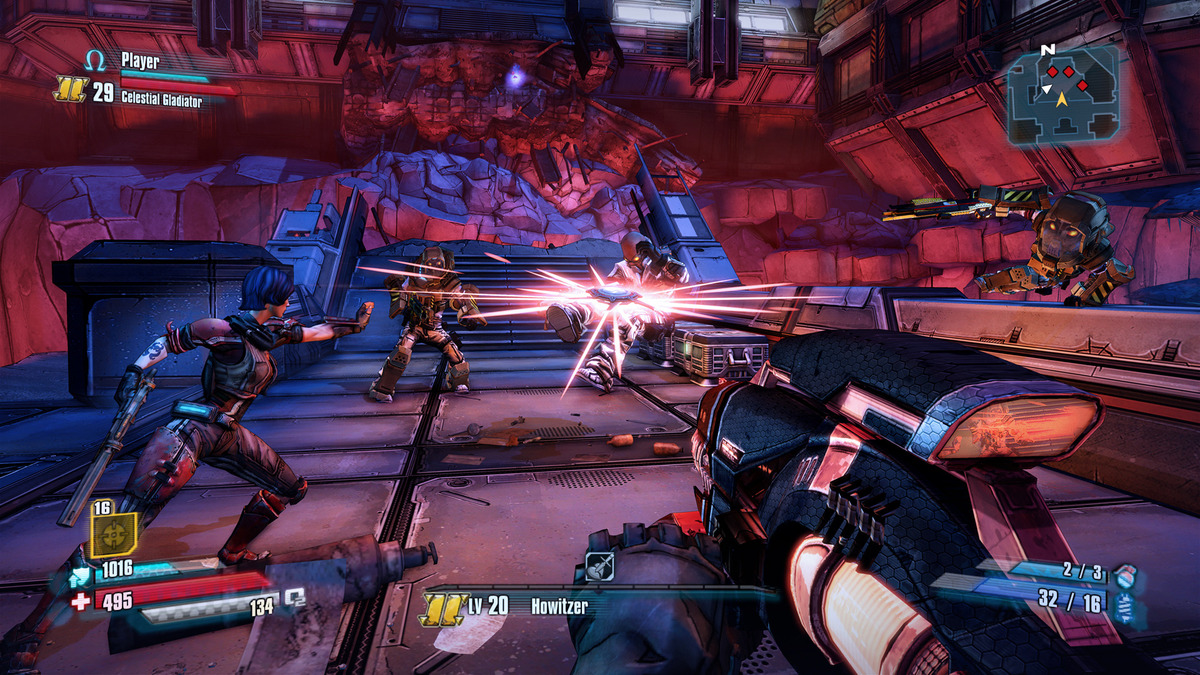 Previous games were known for literally having millions of possible combinations when it came to guns and this one is no different. I was told that they actually lost count of how many different weapon variations that the game had. The weapons can be upgraded with loot found in the world and trying to find all of the parts to create the most powerful and best weapons will be an incentive for people to continually play the game.

The game’s skill trees return but are mostly unchanged. One thing that the devs made sure is that players wouldn’t be able to upgrade every single ability. This was done in order to ensure that everyone’s characters felt distinctive from one another and that they weren’t overly powerful. Having characters who have different skills makes the game more interesting and fun to play since; each is better suited for different tasks.

The game was made with the fans in mind. A lot of things such as having characters like series favorite Claptrap and even the setting of Pandora’s moon all came from feedback from the Borderlands faithful. Most of the playable characters available were already seen in previous games but since fans wanted to know more about them, they were included.

It was also because of the fans that this entry isn’t on the current gen systems. The install base of the PS4 and Xbox One aren’t close to those of the PC, PS3 and Xbox 360. Because of this, and to avoid having to learn new hardware, the team decided that it was best to have the games on last-gen systems only. This also creates a sense of unity since all three Borderlands games can be played across the same system. The developer did tell me that they are not ruling out the possibility of having future Borderlands games on current gen consoles though but they want the install bases on those to be bigger before that happens.

While prequels could be superfluous and not add much to the story, Borderlands: The Pre-Sequel is actually adding something that is substantive. This game is being created by fans of the series and for fans of the series, so there is definitely a lot of passion behind it. The Borderlands fans are a loyal bunch so I think that they’ll really enjoy this game. Check Out the Final Episode in ‘The Making of Borderlands: The Pre-Sequel’ Series