Hands-On Preview: Pac-Man and the Ghostly Adventures 2 – The Pac is Back But Didn’t We Tell Him to Go Home the First Time? Hands-On Preview: Pac-Man and the Ghostly Adventures 2 – The Pac is Back But Didn’t We Tell Him to Go Home the First Time?

Let me take you back to October 29th, 2013, a time where Namco Bandai Games America made gamers believe that Pac-Man and the Ghostly Adventures would be a fun exciting game that would bridge the gap between the young and the old while catering to modern times and honoring cherished memories of the past. However, on this day players were gifted with broken promises, simplistic gameplay, inadequate villains, ruined memories and tarnished dreams.

Now the game is back for a second time…because obviously Namco Bandai is strapped for cash and the only way to save the company is by wasting developers’ talents with a sequel to one of the most disappointing games of 2013.

During this year’s New York Comic Con festivities, I was bestowed the duty of previewing Pac-Man and the Ghostly Adventures 2, which puts the player right into Pac-Man’s oversized shoes…er…sneakers (because teenagers hate shoes).

Let’s start from the beginning. Everything about this game feels like the first — this is a game for children and questionably developed by children, but not those smart innovative children who are going places in life, more like those who serve no promise, purpose and make you throw your hands to the sky as you fall on your knees asking “why?”

That’s mean (accurate but mean) but not all is lost, there’s always coloring and visuals. From the beginning, the colors are vibrant and crisp, it feels like a fresh coat of paint from the finest regions of Paintland where colors are born and live vibrantly. The color scheme in the game is refreshing, welcoming and overall brightens your day. The visuals are sharp and with the same 3D makeup as the previous title, this initial foray fooled me into thinking the gameplay would match my return to Pac-World. Unfortunately this was just a clever tactic, a lure and a lie, which would leave me standing alone in my own puddle of sadness like a Bernie Madoff victim.

Sharp lighting and crisp colors aside, this game is a mess and that’s putting it lightly. There were levels that felt unfinished as if the developers and artists gave up on life or like a public school without any funding. There were invisible walls and floors that just gave way, making a player fall to their unexpected demise. It was embarrassing, sloppy and far from impressive. I just didn’t understand why this was happening — it’s 2014, with all this modern technology this should be a thing of the past.

Another massive hangup the game presented was the lack of camera controls, meaning you’re basically flying blind as enemies and random platforms attack you. Speaking of platforms, trying to jump from one to another is damn near impossible without the gift of sight, so you have to play “The Little Engine that Could” game (I think I can, I think I can) as you jump around aimlessly about the worlds.

Keep in mind I’ve only seen partial gameplay and only several levels compared to the daunting six-hours of gameplay but from what I’ve witnessed, if you’ve played the first game, you’re not missing much here. The sequel follows the same basic paint-by-numbers plot where Betrayus is trying to terrorizing the fine creatures of PacWorld by releasing a horde of robots and ghosts. Like always, only Pac-man, Cylindria and Spiral can save the day until the franchise’s next sequel.

While the game is 95% the same there are some slight differences that offered a glimmering promise that one day the fine folks at Bandai Namco will get it right (hopefully within a decade). The power-ups available allow Pac-Man new special attacks involving his ice and fires suits. One of the other major and welcoming changes is the ability to switch between playing as Pac-Man or any one of his buddies, which make gameplay less depressing.

I rather enjoyed Spiral’s obstacle courses as I could roll around in her pink rocket-skater, targeting and attacking enemies with a blaster while flying around. Like all of life’s pleasures this is only for a brief moment until I was thrust back into the yellow arms of Pac-Man and his annoying commentary which echoed throughout the game, adding to its cheesiness. 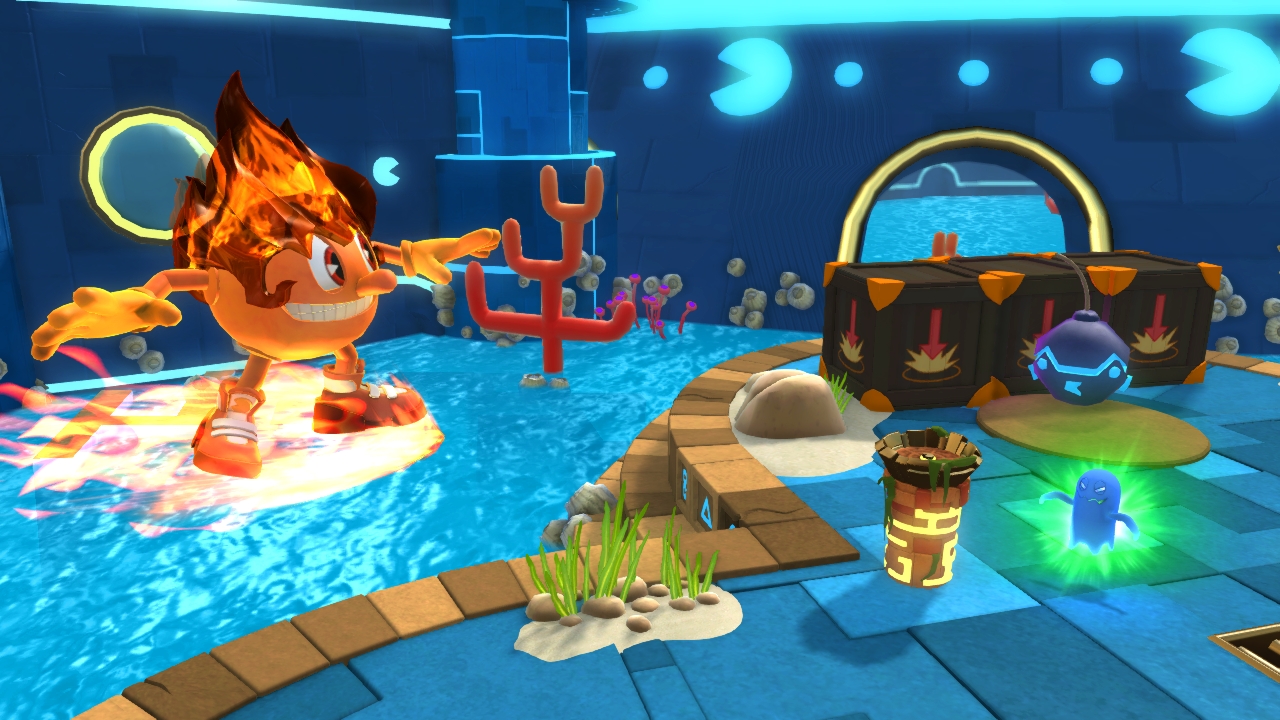 Ghostly Adventures 2 is not something that I can recommend. Honestly our shared brief encounter was enough to have me running to the hills, never looking back. While there are slight improvements to the game, it’s just not worth the time and investment of six hours and trust me after playing this game, six hours is far too much.

There are better, bolder and more interactive games to play and characters that will spark that creativity. While this is based on the Pac-Man and the Ghostly Adventures TV show, even if you have never seen the show, this game appears to be a terrible introduction to the Disney DX series. Unforgettable, bland, boring and just a waste, as this game is too simple for adults and too unimaginative for children of any age.

Unlike the first game, this had an overall feeling of being rushed and choppy, like the developers were just trying to shove a game in people’s faces just in time for the holiday season. Apparently the lessons of NBA Live 14 taught them nothing about the horrors and backlash of rushing a game. Or just maybe the devoted fans of the Pac-Man franchise just aren’t worth the time and enough in their eyes.

Pac-Man the Ghostly Adventures will release on October 14th for PC, 3DS, PlayStation 3, Wii U and Xbox 360.