Move over, Parker. Our favorite “Merc with a mouth” has a video game on the way. It seems that High Moon’s Deadpool is going to paint the town red, literally. Pictures have been peeking up, showing advertisements for the game blatantly spray painted across billboards for The Amazing Spider-Man, which released on consoles and in theaters only three weeks ago. I don’t know who is in charge of Activision’s and High Moon’s advertising, but they are absolutely genius. On the side, you can see an advertisement for Transformers: Fall of Cybertron, another High Moon title that is releasing in just a few weeks.

This type of slapstick plug for the game is exactly what wacky Wade Wilson is all about. Making light of the fictional world of Marvel and slapping an advertisement right on top of it is the perfect advertisement for Deadpool, whose antics and thoughts jump from the page to the real world and back almost seamlessly. The advertisement almost feels like Deadpool broke the fourth wall for good and did it himself. Absolutely perfect, I hope whoever had the idea got a huge raise. If the creativity behind High Moon’s Deadpool game is anything like this, they can expect comic fans and gamers to buy their game by the droves. I try to throw my money at my screen, but nothing happens. 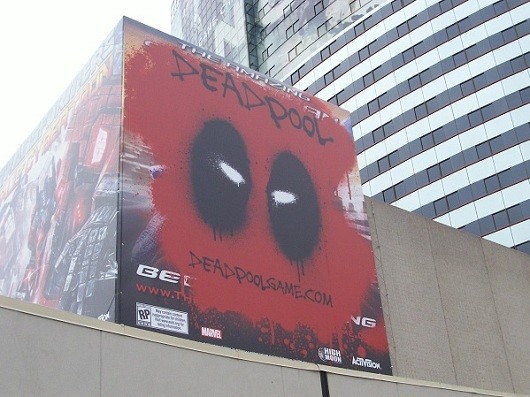 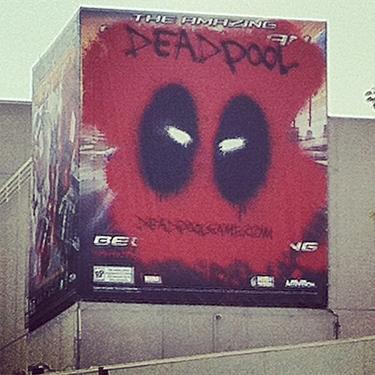 Pokemon Detective Pikachu Trailer May Be Incoming, According to Ryan Reynolds

Ryan Reynolds has posted a teaser to his Instagram Story which hints at incoming Pokemon Detective Pikachu footage, or even maybe a new trailer. Deadpool Remaster Coming to PS4 and Xbox One this November

Deadpool and Other Marvel-Activision Games Being Delisted as Downloadable Titles from Steam, XBLA, and PSN