Hitman 3 is off to a great start in the UK and takes the number one spot in the GfK top ten for the week, moving Animal Crossing to number two.

While Hitman 3 was having a confusing rollout on PC, that didn’t seem to kill off the hype for the game. The game has surpassed its predecessor and has claimed the number one spot on the UK boxed charts (via GamesIndustry.biz). Launch sales for the title were up 17% compared to its predecessor.

Breaking it down further, the PS5 version of the game was the most popular version. It accounted for 49% of sales while the Xbox version of Hitman 3 counted for 27% of sales. The PS4 version made up 25%.

These numbers only take into consideration physical sales. Many copies of Hitman 3 were also purchased digitally and are not reflected in these numbers.

Animal Crossing: New Horizons dropped down to the number two spot. However, it should be noted that it was only beaten by about 800 copies. The sales for Animal Crossing: New Horizons dropped 8% week-on-week. The game has been out for almost a year now and it continues to do monster numbers. It hasn’t reached Mario Kart 8 Deluxe in total sales yet, but I think it might eventually surpass it.

Many PS5 titles dropped into the list this week. Spider-Man: Miles Morales jumped up 161% and made its way to the number five spot. Call of Duty Black Ops Cold War also jumped up 56% with the PlayStation version driving many of those sales. Assassin’s Creed Valhalla went up by 7%. However, the PS5 version skyrocketed by 174%.

Finally, Ring Fit Adventure was able to slide its way into the top ten again. It jumped from the number ten spot last week to the number seven spot this week. Ever since the global pandemic hit, this game has routinely been hard to find. I guess plenty of people want to get their exercise in at home. 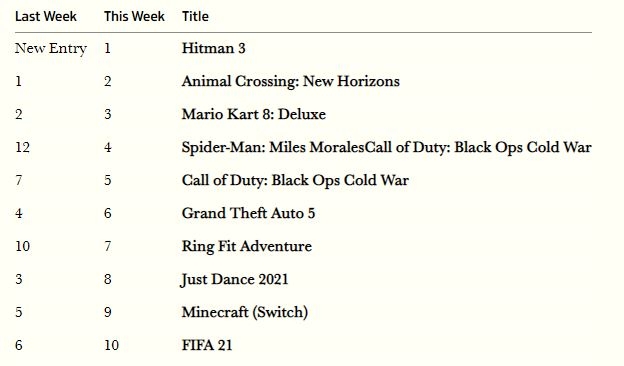