There are certain things in life that fit together like a glove: ice cream and cake or a hot dog and summer. Sometimes, pairings come together because of inspiration.

In the mists of war, many “Ghost” soldiers are fitted with a “mask skull,” which is just a scarf of a skull image fitted over the soldier’s face. Something as simple as gear used in battle has inspired the fashion world, gaming and movies.

These masks can later be seen in Hollywood movies like 2005’s Harsh Times, where Christian Bale dons the skull mask variety. Then along came Call of Duty: Ghosts who had no intention of influencing the fashion world, they just wanted to be as accurate as possible. Yet they influenced people everywhere to start wearing one, even more than fashion designer Alexander McQueen’s 2004 “Skull Scarf.”

It’s safe to say that the gaming industry has come a long way from the Atari 2600 days. Long gone are the days of of hiding in your mother’s basement or playing a Pokémon game under the cover of darkness, now no one thinks twice when they reveal their passion for gaming.

From book adaptations, comics, blockbuster movies, to even music; gaming is touching the lives of many despite them not knowing the difference between a PlayStation and a hockey stick. So what’s next for the gaming giants? The obvious step would be…taking over the fashion industry.

The billion dollar industry is  way too big for the gaming world to ignore; aside from the occasional “I Love Gaming” t-shirt, wouldn’t it be cool to rock your favorite gaming character while looking incredibly stylish and not looking like you stepped out of a game?

It just so happens that some video game companies are doing just that, by taking the industry to a whole new level and outside the questionable Hot Topic store (no offense).

While opening a couple of online stores to sell some rather nice gaming fashion is a start unless you actually play the games, not everyone is going to willingly fork over money for a brand they are not familiar, unless it has seeped into the  lives and memories of non-gamers like franchises Mario (and maybe Madden and Final Fantasy). However games like Bioshock, Little Big Planet or Diablo will result in a blank empty stare by someone who isn’t a part of the gaming world. 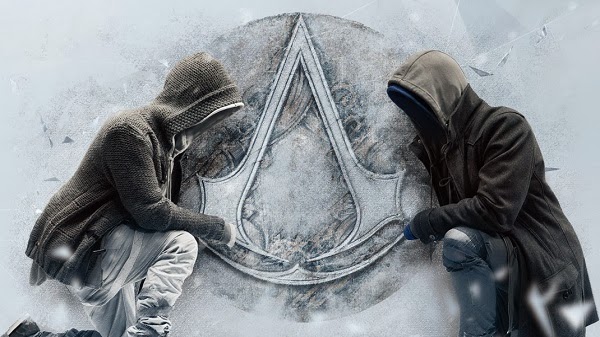 Then along came Just Dance which has so far succeeded in changing the game (pun intended). Just this year, the dancing phenomenon took the fashion industry by storm when Ubisoft’s clothing line made its presence known at New York Fashion Week, where the top designers from all over the world (and queen of fashion/editor of Vogue Magazine Anna Wintour) gathered together to scope out the upcoming fashion trends for the Spring 2014 season.

Prior to the show, attendees could even demo the game in one corner of the venue, alongside beauty products.

The Boy Meets Girl fashion show was from designer Stacey Igel’s spring line, which was based on the video game. In an interview with New York Daily News, Ubisoft senior VP Tony Key explained:

The brand DNA of Just Dance has always been around pop culture, which is when music and fashion and celebrity come together. We want to be more than just a video game. The fashion designs inside the game are really inspirational. We want to extend that just past the game. We want our avatars to be pop culture icons.

The pure genius behind Just Dance is that it was never targeted towards gamers. It always marketed itself as being a fun experience for everyone. Even I can recall playing the game with a grandmother and a child no older than five-years old and they were not into gaming, nor did they consider it to be a video game, but an “experience.” Since Ubisoft marketed the game differently from others, it allowed Just Dance to achieve a kind of success others franchises have not.

It was somewhat opportunistic. And it just exploded. The brand makes dancing and video games completely accessible to anyone.

Throughout the years the game has grown from a simple  “follow the dance steps” routine to taking fashion by storm, all in the form of avatars. You have to start somewhere. Something as simple as fashionable avatars helped people immerse themselves into the game and after a while the folks at Ubisoft got to thinking, “what if they reflected the latest fashion trends with avatars?”

It made perfect sense since Just Dance is majorly played by women and women are the main target audience of the fashion world. As a result of their fashionable AI trends, the brand continued to growth, but the fashion line is just the next step.

While brands like Musterbrand is making the slash in the fashion industry, there are other companies that are the doing this their way. One of the most iconic femme fatales in gaming is Lara Croft from Tomb Raider and, thanks to several successful Hollywood adaptations, her character is own by all gamers and non-gamers; people all the around the world are sporting her cargo pants and tank top look.

Thanks to Square Enix studio Crystal Dynamics and Tree House Brands, your Tomb Raider fashion sense can become a bit more versatile with the official online Tomb Raider Store, which offers trendy and note-worthy items like hoodies, messenger bags for all your stuff, yoga pants when you’re searching for your inner peace and jackets to make men look rugged with style.

For some reason if that site doesn’t make you jump for gaming fashion, the Bethesda Store offers apparel from Dishonored, The Elder Scrolls, The Evil Within, Fallout, DOOM, Quake, Wolfenstein and more.

While going from the hallowed halls of NYFW, to inside clothing giants like Macys, Target or even Wal-Mart is not an overnight process, Ubisoft and Musterbrand have made a name for themselves by exposing trendy video game fashion to the serious fashion world and vice versa.

One day I’m sure we’ll start seeing more and more video game-inspired clothing for everyone, including grandma. In fact, don’t be surprised if her dress was inspired by Thief.

Just Dance is Turning Into a Movie, Hollywood Now Grasping at Straws