I feel a bit out of my league, in a way, since I don’t usually delve into the realm of indie games. However, I am pretty familiar with time wasters. I waste time all the…time. At home, at work, waiting at the dentist, wherever. There’s always time to waste playing some little simple, yet incredibly fun game on my iPhone.

Ichi isn’t an iPhone game, but it is a fun time-waster if you’re in front of your computer. My dad would always sit in front of his computer – for hours on end – playing that solitaire game that comes with Windows. In fact, I think he still does it. Perhaps he will appreciate Ichi and actually play something of quality instead of blindly moving cards around as he stares at the dim screen with his bifocals.

Ichi was created by the one-man team of Jay van Hutten, who has spent many sleepless nights and been through countless caffeine-induced hazes to give us a nifty little puzzle experience. The concept is pretty simple – with one button press (the space bar) you control a series of triangles (bumpers) in each level. These bumpers are used to bounce a line around the screen to pick up little yellow circles. You want the circles, they’re your friends and you need to love them, squeeze them, pick them up and give them a nice home. Using the space bar, you change the direction of ALL red bumpers on the screen at once. Using this method, you must direct the line to pick up the dots without failing. 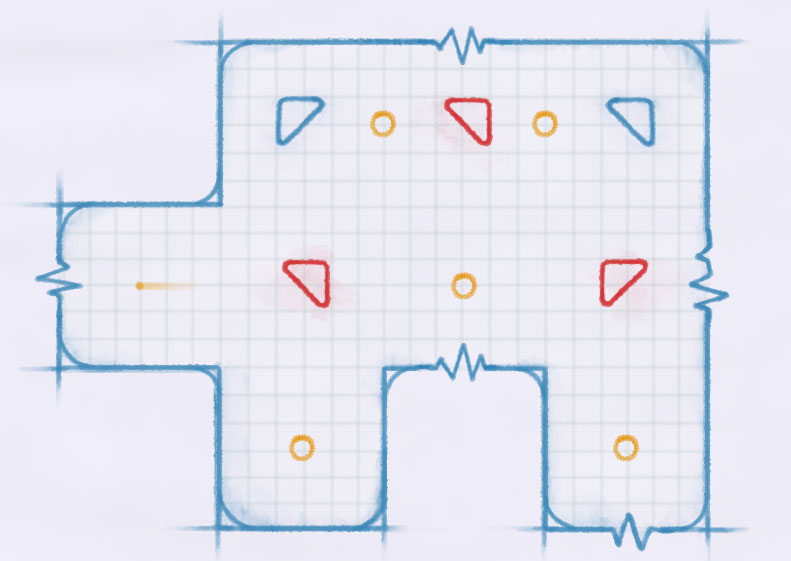 The simple concept is complicated by some hazards. I mean, c’mon, what would a game be without hazards to avoid? That would be like playing Fruit Ninja without bombs flying at you every time you turn around. The hazards are there in the form of spikes on the wall of the level. When the border is “normal”, the line will bounce off, when you send it into the spikes, it’s game over.

The object is to figure out how to bounce the line around the stage without sending it into the spikes. Simple, right? Yeah, no. It is actually pretty thought-provoking, to be quite honest. There’s a lot of trial-and-error involved which, in a game like this, isn’t that much of an issue.

As you progress through the levels, new concepts are introduced, such as the ability to draw a solid line that doesn’t fade with your line as it passes certain areas. You can then use the line as a one-time bumper to bounce your line off of and keep it from going where you don’t want it to go.

Aside from the gameplay itself, I found the use of only the space bar very intuitive, actually. First off, that one button press flips every movable bumper on the level (some move, some don’t, they’re color-coded). Secondly, you use the space bar to navigate the menus. A single tap will rotate the menus or move between levels on the level selection screen. Holding down the space bar for a couple seconds will fill up the generally “open” graphics and make the selection. So, it’s very simple, easy to learn and actually quite effective and stylish, as well. 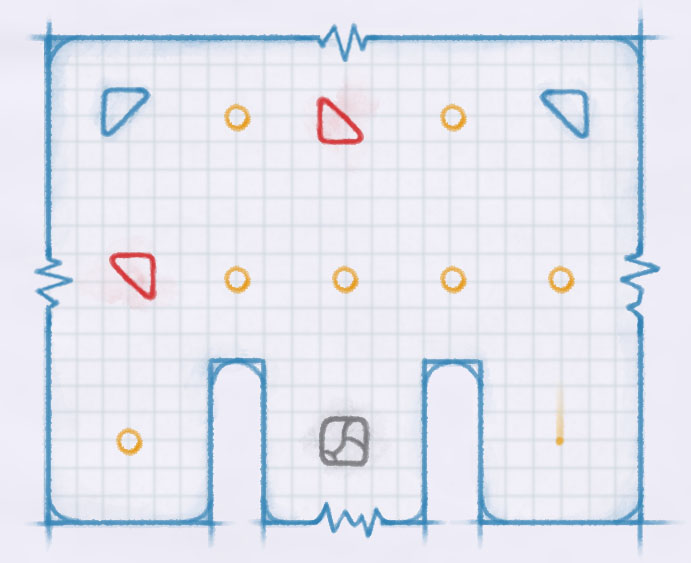 The artwork is nice. It’s a “hand drawn” style, that looks like something a drafter would draw on graph paper. I do drafting (of the computer aided kind) for a day job, so I’m rather familiar with that concept. That isn’t a bad thing! It’s simple, attractive and the hand drawn style adds a bit of flair and quality to a game that very well could have looked pretty bland.

If you’re looking for a quick, simple time-waster, you can’t really go wrong here. While it won’t take long to get through if you figure stuff out quickly, you can come back to it a week or a month later and probably forget how to solve every level and work on it again. It’s certainly something to try out. I really think this game would also work on mobile devices like the iPhone, with a simple one-tap interface instead of one-button. Overall, though, a great little game that shows a lot of promise. You should check it out.