While I haven’t spent a whole lot of time with the Diablo III beta, I have completed all the available scenario with one class and done quite a bit of exploration and poking around. It’s rather interesting to see the Internet react to this game being playable to people outside Blizzard for the first time, and it’s something you don’t see too often. StarCraft II received the same awe-inspiring treatment from the gaming world in general, as well, simply because it had been so long since the previous title was released.

I realize Diablo isn’t a game about customizing your character’s appearance, but the first thing I was disappointed in was the fact that you just get to choose your class and your gender at character creation. I figured Blizzard would be past that now, allowing a wider variety of customization options up front. But, I suppose, that will all have to wait and be done through weapons, armor, stats and abilities within the game itself. It is also not really the focus of the game, obviously. 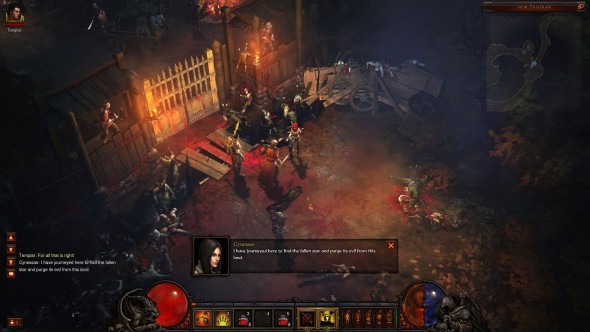 The first thing I noticed was that the visuals were actually not as impressive as I expected. While they are not terrible by any means, with everything set on the maximum, I was getting a very “is that it?” feel from it all. Don’t get me wrong, the game does look good, but not that good. Oh, I’m quite aware I’ll probably get a bunch of blind hate mail for that remark. But, the caveat here is that this is still early in the beta testing phase, where textures and effects can still be improved. There were times in the last couple World of Warcraft beta periods early on where certain visual effects weren’t available, as well.

Moving on, I think the story so far, its pacing and the characters and voice acting are done really, really well. There are a few voices that are kind of rough around the edges. I chose the Demon Hunter class to start, a female (you know, channeling my inner Sylvannas), and her voice is just very rigid. It’s almost to the point of being hard to take. Unlike most other RPGs, though, the side characters actually resonate better, from what I’ve seen.

The parts of the Act 1 scenario that are available won’t take you long to go through, so you might as well explore. Without exploration I could have gone from character creation to killing the boss at the “end” of the beta in two to three hours. As is, over the last couple days, I believe I played a good six hours or so. 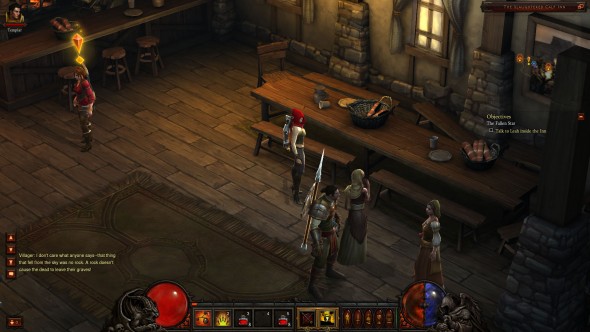 I have not played any Diablo games in the past, and I’m not a huge fan of top-down RPGs like this, however I’m impressed with the amount of features that make me want to dig into this game. From companions that join you on your journeys, whom you can level up and equip, to professions and loot whoring, to enchanting and socketing equipment – it all sounds very much like a solo and co-op version of WoW, in the loosest sense of a comparison.

The things that concern me mostly revolve around the difficulty. This first part of the game is easy, even on normal difficulty. Granted, there are a couple touchy parts that, if you’re not careful, will get you flattened. For example, in the final dungeon area, there’s a room you can go into with a chest in the middle. When you attempt to access the chest, your heart sinks as it disappears and these nodes that continually spawn enemies appear. And by “continually spawn” I mean about 50 enemies suddenly appear and pound you into the ground faster than you can scream “Mommy!”. But, overall, health globes drop off of practically everything, health restoration pools are plentiful and enemies just generally don’t hit that hard. The bosses are uninspired, as well. 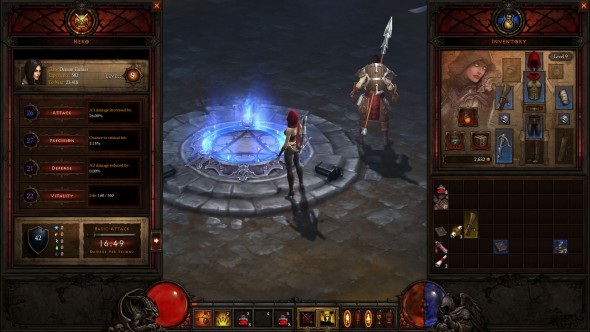 After saying that, this is the beta, again, and this is just the first half of the first act that is available. So, perhaps things will get a bit more challenging without becoming overbearing down the line, with bosses that are more interesting and actually put up a fight.

I will hopefully be playing through it a couple more times with various classes (the Wizard also interests me), but my experiences the first time through were fairly positive, for the most part. There’s a lot of iffy-ness in my mind, simply because this is early on in the beta, so all this really should be taken with a grain of salt, as things can still be balanced, tweaked and, sometimes, massively overhauled. Stay tuned for more beta coverage of Diablo III as time goes on.