With Jurassic World Evolution, Frontier Developments brings the iconic theme park to life with a park sim that admirably blends nuance and accessibility.

When I think back on my childhood, a ton of it was dominated by dinosaurs. As a kid, I read through dozens of books about the prehistoric creatures, took more than a few trips to the Museum of Natural History to view the dinosaur skeletons and, naturally, watched Jurassic Park practically on loop as a kid. That devotion and love for dinosaurs as a kid is a big part of why Jurassic Park has continued to stick with me for well over 25 years, and naturally, that makes the prospect of building my version of the park so exciting in Jurassic World Evolution.

Of course, this is not the first time around that we’ve seen a park-building sim based on Jurassic Park as previous games, like 2003’s Jurassic Park: Operation Genesis, had their unique take on the dream of building your own version of Jurassic Park. However, with modern tech and an esteemed developer behind the wheel, Jurassic World Evolution takes the idea of a Jurassic Park-building game and dials the concept up higher, even if the result is not entirely a perfect specimen. 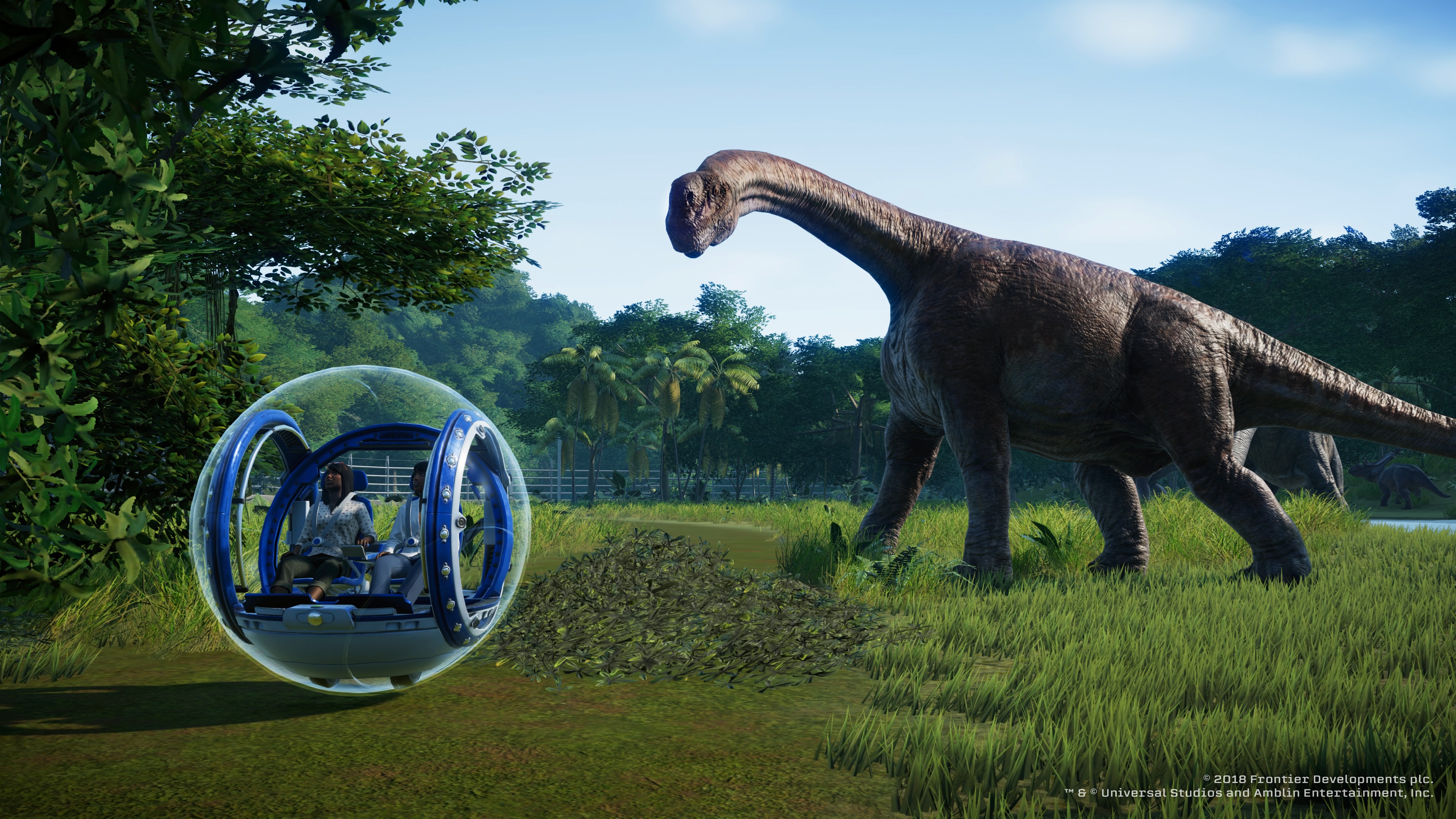 “What sets [Jurassic World Evolution] apart…are the surprising amounts of nuance and depth that Frontier Developments have packed into its simulation.”

If you’re looking for that idea of building the Jurassic Park of your dreams like I was, Jurassic World Evolution will deliver in that regard. But what sets it apart — and how it exceeds being more than just a movie tie-in to the most recent Jurassic World film — are the surprising amounts of nuance and depth that Frontier Developments have packed into its simulation of the iconic dinosaur-filled theme park.

Coming from the team behind titles such as Elite: Dangerous and Planet Coaster, I knew going in that I could expect an in-depth simulation with a ton of options and variety from Frontier, and that’s a big part of what drew me into Evolution based on the studio’s pedigree. What I didn’t expect was the fact that Frontier also succeeded in making a game that doesn’t swing too hard in the other direction of being an impenetrable “hardcore” sim — as someone that doesn’t really play a ton of city/park-building games, I don’t think Evolution will be too intimidating for newcomers drawn in by its Jurassic World tie-in. 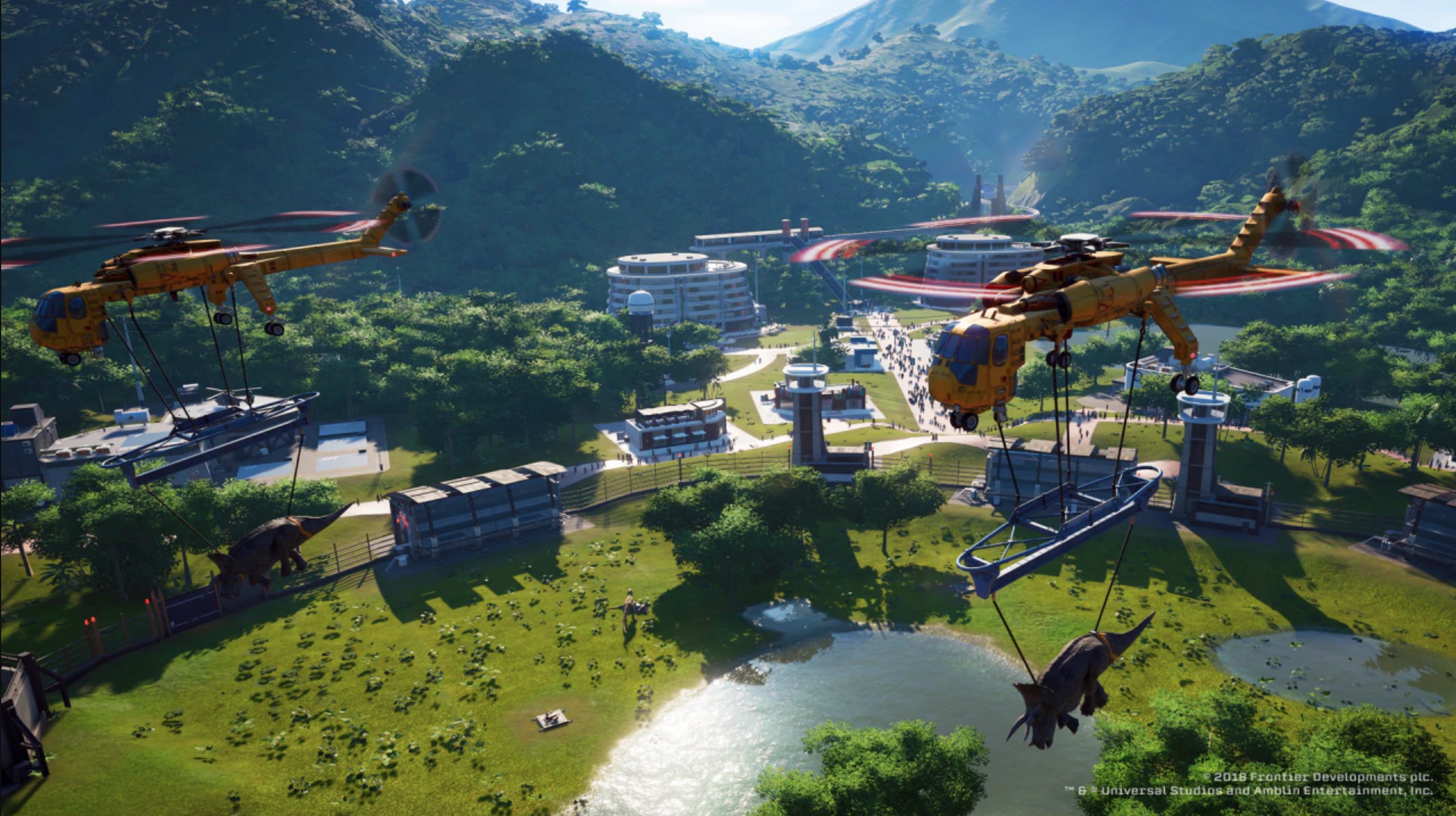 “You research and incubate new dinosaurs, you build new attractions and accommodations to draw in more park guests, and you maintain the park’s infrastructure.”

Jurassic World Evolution takes players on a mission to establish and build out the park to their own liking, while also ensuring that the park can sustain itself financially by completing assignments related to each of the park’s Divisions: Science, Entertainment, and Security. These three attributes of your park form the core gameplay loop of Jurassic World Evolution: you research and incubate new dinosaurs, you build new attractions and accommodations to draw in more park guests, and you maintain the park’s infrastructure and find ways to ensure that the park guests can remain secure and out of harm’s way… though given that this is Jurassic Park, that only seems inevitable.

The game itself starts out on a “campaign” of sorts, in that you gradually build out Jurassic World over five islands (with the last island being the iconic Isla Nublar from the original film), with each new island presenting some new challenge or obstacle to overcome while expanding the park. These can range from tropical storms that might damage certain buildings or areas of the park (including the ever critical electric fences that can contain your carnivorous dinosaurs), diseases that can spread across your dinos that will require some extensive medical assistance or more constrained areas that you have to build your park inside of. 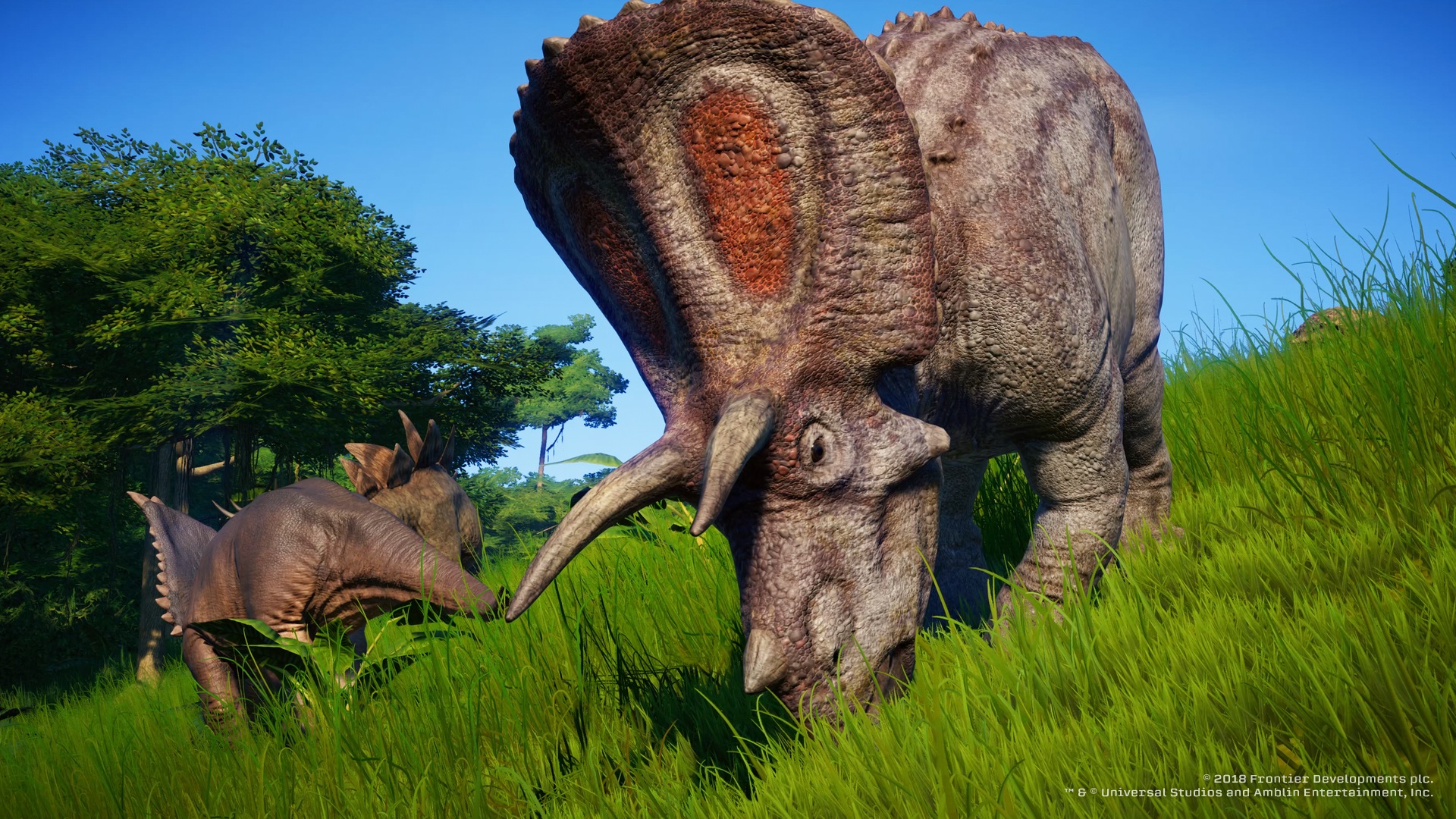 “From top to bottom, Jurassic World Evolution is a layered simulation game with a lot to maintain and keep up with, in both good and bad ways.”

That campaign mainly plays out between completing the tasks laid out to you through the Science, Entertainment, and Security Divisions, which each involve having to achieve a specific goal out in the park. This includes building a particular dinosaur at a certain DNA proficiency level, building a specific type of security structure, or building some more restaurants and gift shops to suit the park’s commercial needs.

Overall, the missions themselves do a good job at giving directives and helping to guide players through Jurassic World Evolution‘s more intricate mechanics, though the one annoying contrivance is that each of the Divisions has their own “reputation” with you, as well. By completing a task for one specific Division, that impacts your relationship with the other two, which (largely) feels a bit like taking one step forward, two steps back when your reputation drops below a certain percent with one grab, and having to rebuild that relationship up again to get new assignments.

From top to bottom, Jurassic World Evolution is a layered simulation game with a lot to maintain and keep up with, in both good and bad ways. From the beginning of the game, there is a reasonably clear cycle set up between expanding your park and finding ways to bring in more park guests (and in turn more money) and seeking out new dino attractions and research to build on the park’s potential. While at the beginning of the game you’ll start out with just a few dinosaurs to choose from, you can gradually work your way up to the most iconic dinosaurs from the films, such as Triceratops, Velociraptors, and the T-Rex. 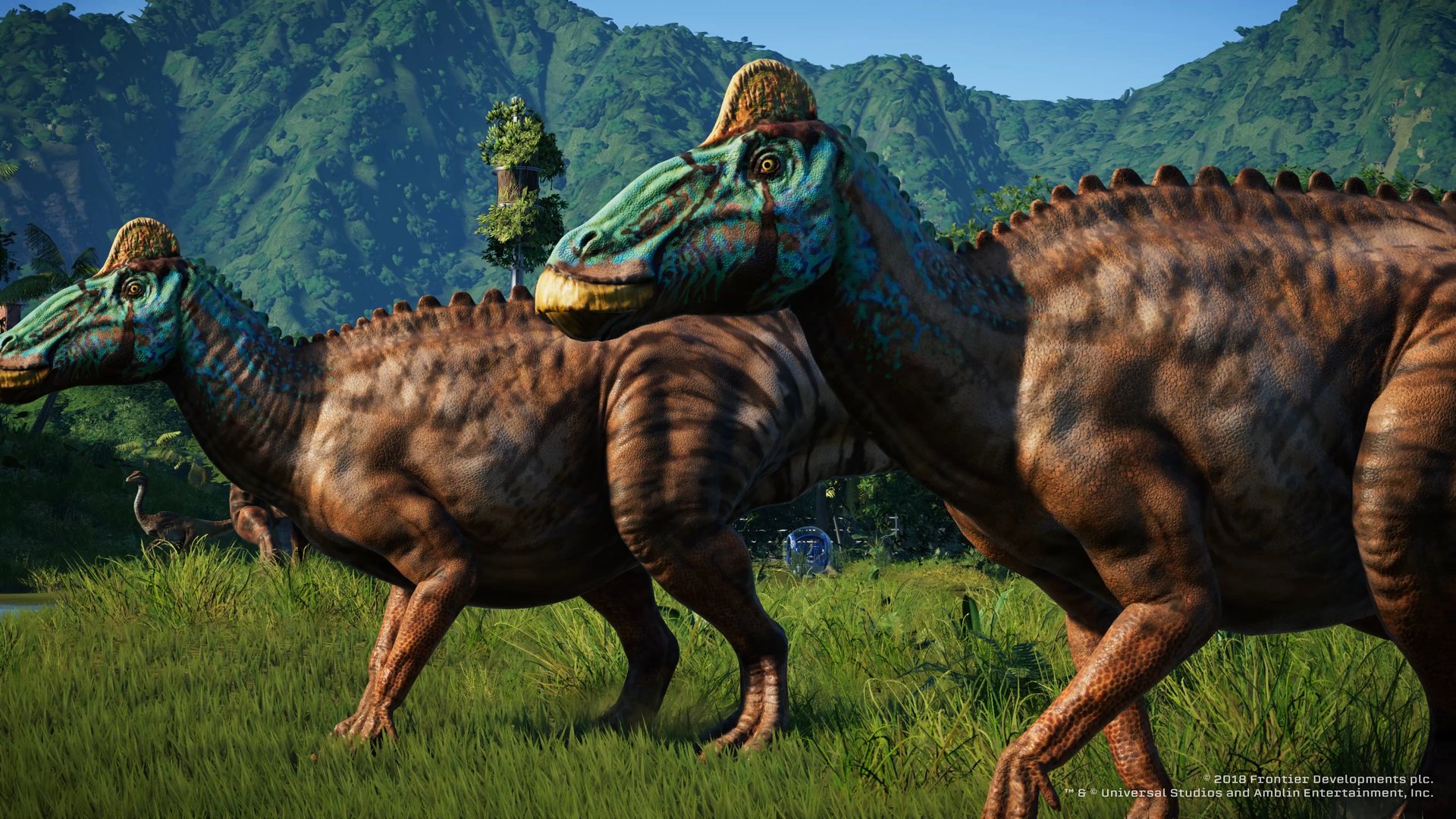 “The dinosaurs themselves convincingly come to life.”

When Jurassic World Evolution clicks and everything is running smoothly, the balance between building and maintaining the park has a nice sense of rhythm to it. The one feature though that I’m surprised wasn’t included is any fast-forward or time-skipping feature, as everything instead plays out in real-time, including your flow of cash and resources. While generally it doesn’t take too long to wait for income to roll in (especially once you have a well-developed and operational park), I will say that the beginning and middle stages of park building could sometimes be a drag if you’re stuck waiting for money to roll in so that you can afford a crucial park component and continue making progress.

That said, what impressed me the most is the fact that Jurassic World Evolution really makes good on the use of its iconic license. While the general look and aesthetic of the game is based around Jurassic World, Evolution really does pay loving homage to the film series in every way. Visually-speaking the game’s environments and detail shine with colorful and vivid plantlife, and the dinosaurs themselves convincingly come to life through their animations and behaviors. Honestly, I wouldn’t be ashamed to admit that I spent a good amount of my time with Evolution merely zooming in on the ground level to admire the wondrous creatures out in the park on their own and cohabiting with one another…even if a hungry T-Rex ended up coming in and viciously slaughtering many of them within a few minutes later. 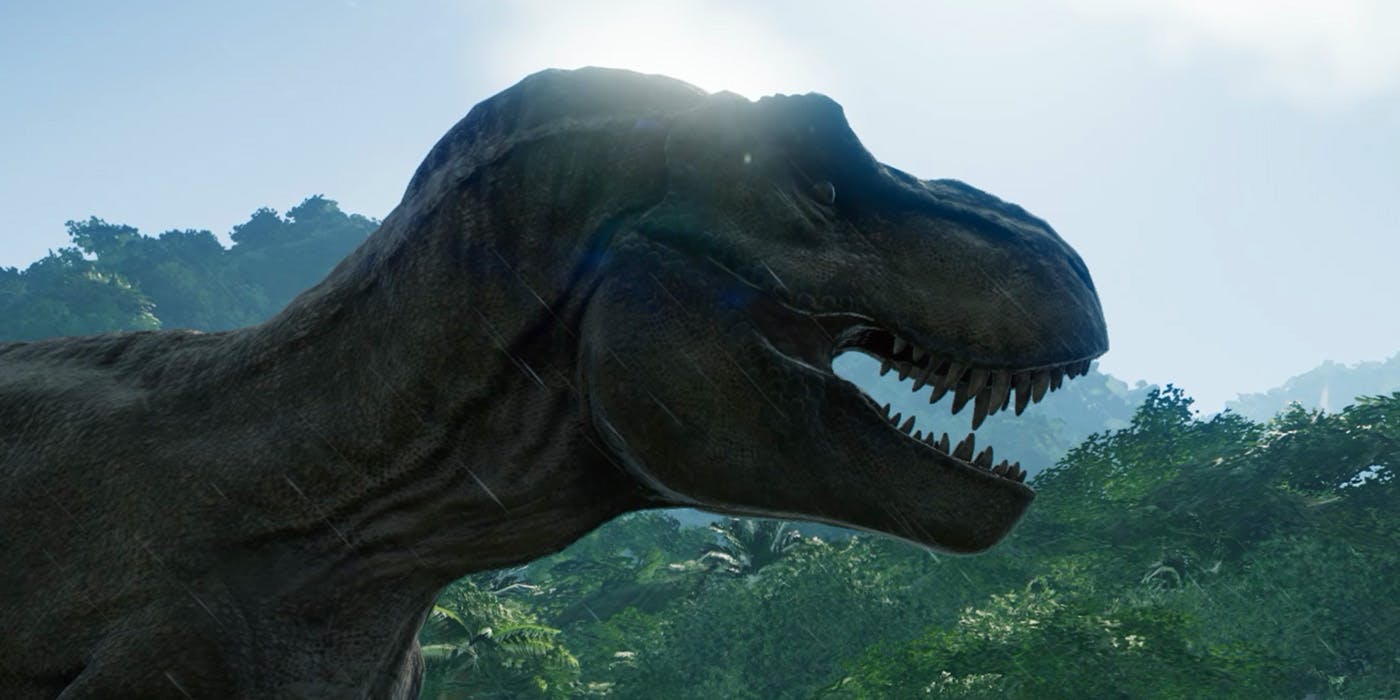 All in all, it’s hard to say that Evolution doesn’t look and feel like Jurassic Park, especially once the classic film score and theme music kicks in to stir you into the park’s setting and world. Even better is the fact that the one and only Jeff Goldblum acts as one of the main narrators in the game as Dr. Ian Malcolm, while Jurassic World‘s Bryce Dallas Howard and B.D. Wong also reprise their characters from the film. While this clashes somewhat with a few of the characters that end up in the game but aren’t voiced by the actual actors — such as Owen Grady popping up but not being voiced by Chris Pratt — it’s just one more way that Frontier Developments really took care with using the Jurassic Park license to its fullest.

Though the prospects of a dinosaur-filled theme park seem unimaginable (and probably for the better, to be honest), Jurassic World Evolution is a fun way to at the very least entertain the idea of it being a possibility. Given that we’ve had five films now about the idea of a dinosaur theme park going wrong, there’s no denying that the concept of Jurassic Park is an incredibly dangerous one, but with Jurassic World Evolution, there’s at least the possibility to have some fun with it.

While Jurassic World Evolution sometimes can be a bit unwieldy from the number of systems it is balancing at once, Frontier Developments mostly finds a nice middle ground in Evolution between depth and accessibility. As long as I get a few moments to zoom down in and marvel at the wonder of dinosaurs now and then, I’d give careful consideration to endorsing this park.

Jurassic World Aftermath asks you to traverse Isla Nublar to find some research materials. Unfortunately, VR Velociraptors are on your tail.