Kazunori Yamauchi is the father of the Gran Turismo Series, but he’s also an accomplished racing driver. In the past 24 hours, he’s been competing in the prestigious Nurburgring 24h endurance race as part of Team GT Academy, which also included Tobias Schulze, Yasukichi Yamamoto and the first GT Academy winner Lucas Ordoñez.

Yamauchi’s #123 Nissan GT-R was competing in the SP 8T class, the turbo version of the popular SP 8 class. The competition within the class was actually a duel, as it included only two cars, pitching Team GT Academy against the other Nissan GT-R, the #23 from Team Nissan GT-R (Imaginative name, I know). 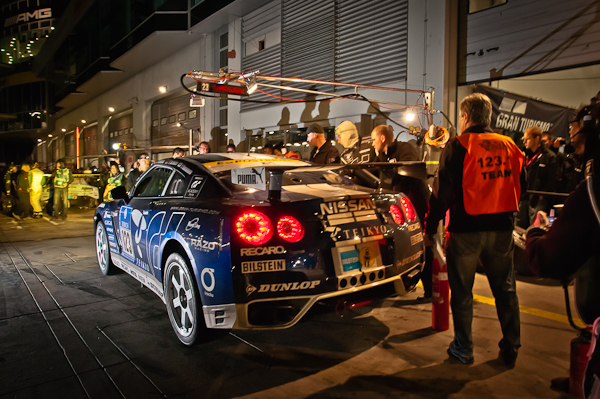 Yamauchi’s team started 47th on the grid, but fell in the mid seventies about three hours into the race due to a flat tire (and on a track as long as the Nurburgring getting back to the pits to change a tire isn’t exactly a quick feat), but after racing flawlessly for the whole night, they managed to gain position after position, ending the race 30th after 136 laps and beating the rival car, achieving victory in the SP 8T class. The two last laps (driven by Lucas Ordoñez) were quite a thrill, as the team overtook four cars.

This result improves Yamauchi’s victorious race from last year, in which his team ended 36th while running 134 laps.

Below you can see a couple clips featuring highlights from the race with Yamauchi, his team and his car, and the Nissan GT-R as it pits out after a stint driven by Yamauchi himself. With such a passion for racing, there’s little doubt on the reasons why the Gran Turismo series is so good. Kazunori Yamauchi Aiming for Class Victory in the Nurburgring 24h

Kazunori Yamauchi is Racing Right Now at the Nurburgring 24h. Let’s Cheer On Him

Kazunori Yamauchi Will Race Again in the 2011 Nuburgring 24h

Kazunori Yamauchi: There Are Still Things to Improve for a “Much, Much Better Gran Turismo”