Following a previous report earlier this week that leaked information on the next rumored title, Activision seems prepared to reveal the next chapter in the Call of Duty franchise with the rumored title being Call of Duty: Infinite Warfare, with new information seeming to corroborate the next title.

After a leak from the PlayStation Store earlier this week revealing the game’s name, leaked artwork has appeared from Reddit  (from user InfiniteWarfareLeaks) of what appears to be a Target pre-order card, showing artwork for Infinite Warfare and a release date of November 4th, 2016.

However, the card for the game’s “Legacy Edition” (most likely a collector’s or premium edition of the game) also includes Call of Duty 4: Modern Warfare Remastered, signifying that Activision and Infinity Ward appear to be working on a remastered version of the 2007 title.

Neither Activision or Infinity Ward have made any official confirmation on either the artwork or the remastered Modern Warfare just yet, though interestingly just yesterday the official Call of Duty Twitter account posted a response to a fan comment from over a year and a half ago on the matter:

Stay tuned for more official information or confirmation from either Activision or Infinity Ward on the next Call of Duty title for this year. 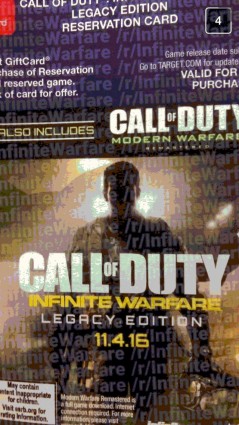 It's time again to win some prizes, play some games, and hangout with the DualShockers staff -- come hang out on this week's community playdate!