LEGO Star Wars has always been an iterative series much like Madden, Call of Duty, and Assassin’s Creed. Each entry builds upon the mechanics of the last, adding in new features and ditching those that didn’t work before.

LEGO Star Wars Episode VII: The Force Awakens is a great progression from the previous LEGO Star Wars games, though inherently less ambitions than LEGO Dimensions due to the restriction to one property. Since this is more aimed for those still high on the nostalgia present in The Force Awakens, it probably won’t matter much anyway when it releases on June 28, 2016. 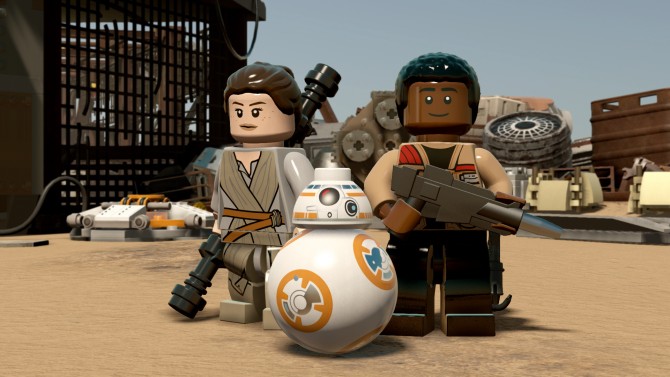 One thing TT Games mentioned a few times, was that they had “enough time” to really get this LEGO game right. Two things that really help show that is how good the game looks, and that they got all of the major cast in for new voice work just for the game.

Everyone you would think, Daisy Ridley, John Boyega, Harrison Ford, Carrie Fisher, Adam Driver, returned to deliver new lines not from the film. Unfortunately, TT Games continues to cut and paste audio of the film’s spoken lines directly into the game, which can cause some majorly awkward juxtapositions. Adam Driver’s Kylo Ren is emotionally unstable and a loose canon, so to have audio from a rage-induced freak out overlaid with a visually humorous scene just doesn’t fit. Likewise, Daisy Ridley’s Rey delivers her dismissal to BB-8 in a way that doesn’t match the movie scene at all, and also appears to have been remixed with more echo than was necessary for an inside space.

There are eighteen levels in total, with eleven coming from the film, and seven created just for the game to fill in some gaps. Each level is reached from a hub world, of which there are five: Jakku, Takodana, Starkiller Base, D’Qar, and the Millennium Falcon. E

very level also opens with the iconic text crawl, which matches up with the sound, text size, and font of the films. There will be over two-hundred mini-fig characters to play as, spanning Episodes I-VI and include other Star Wars media though specifics have not yet been given. In addition to the playable mini-figs, which will also come with visual customization, there are forty vehicles and creatures the player can use.

Each character has their own abilities, with Rey wall-running and sliding underneath walls, Finn accessing Imperial codes (which is played out as a mix and match game for an Imperial Uniform), and BB-8’s spherical shape allowing him to move on a treadmill-like structure to open doors and other platforms. 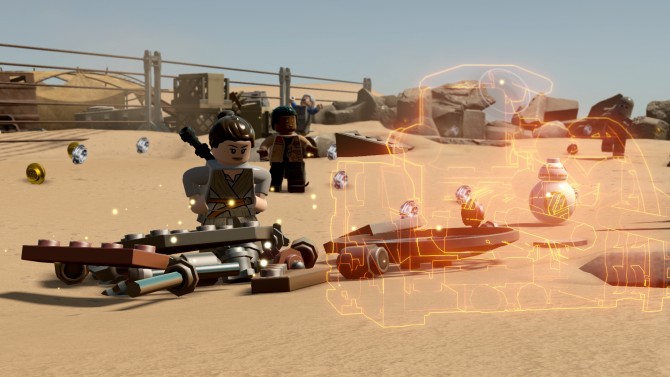 A new feature is the ability to build multiple sets from LEGO blocks strewn on the ground. Before these would be opportunities to create a set to progress or gain more points, but now you can choose from predetermined builds to aid in your adventure. They can be destroyed and rebuilt, so you also don’t have to worry about being locked into a choice.

Flying returns, and in addition to the on-rails shooting, there are also arena based sections where you are free to fly around the open area. The last new feature, and the only one not shown, was blaster battles. This is where your path forward is blocked by a large amount of enemies, forcing you to take cover. In these gameplay sections you can engage in cover shooting, build LEGO sets to aid you, or interact with your surroundings in different ways.

Collectibles are a staple that will never be absent in LEGO titles, and this time your main collectible will unlock mini-fig vehicles, versions of iconic starfighters made out of very few blocks that your character can even ride on top of during the flying sections of a level. Quick time events have been introduced, though they are forgiving and rare, given the wide age-group TT Games hopes to appeal to with every LEGO game. 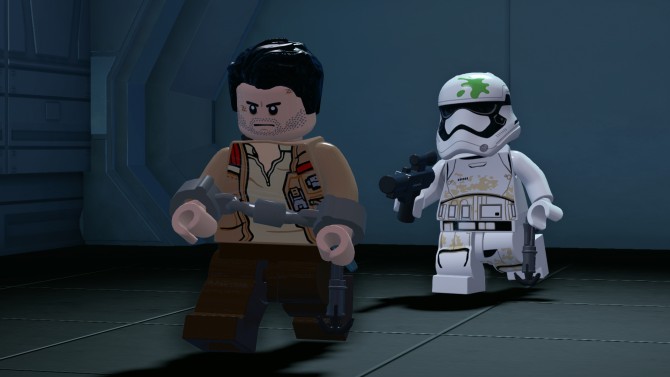 LEGO Star Wars Episode VII: The Force Awakens might not be the one to draw you back in if you have grown tired of the LEGO formula, but it does enough new things with fresh characters (who doesn’t love Finn or Rey?) to warrant a try. Cooperative play is restricted to the couch only, but watching Kylo Ren try to hide his teen-inspired room where band posters have been replaced by Darth Vader’s head makes up for it. Two new PlayStation Sales are up on the Playstation Store. LEGO CITY Undercover for PS4, Xbox One, Switch, and PC Gets First Trailer