Lichthund’s Lichtspeer is the game I didn’t know I needed. Oozing with 80’s flair, the game is one of the most simply constructed yet absolutely addictive titles I’ve played in recent memory. The high score-chasing action and retro style is exactly the palette cleanser for a season packed with AAA behemoths.

Lichtspeer isn’t a complicated game – in fact, it revels in it’s absent-minded simplicity. Granted a powerful “Lichtspeer” from the Lichtgods, you are tasked with battling hordes of Nordic-themed enemies for no apparent rhyme or reason. While players progress through the various worlds and environments, you are never given a higher purpose for headshotting scores of giants and wizards, but you never need motivation outside that.

The titular weapon mentioned above – the Lichtspeer – is a light saber-like, infinitely generating neon spear. As waves of enemies approach from the right, you are able to throw the spear at various arcs and power levels in a mix of the best components of the original Plants vs. Zombies and Angry Birds. It’s an admittedly simple premise expanded on by tight controls, satisfying visuals, and intelligent design. 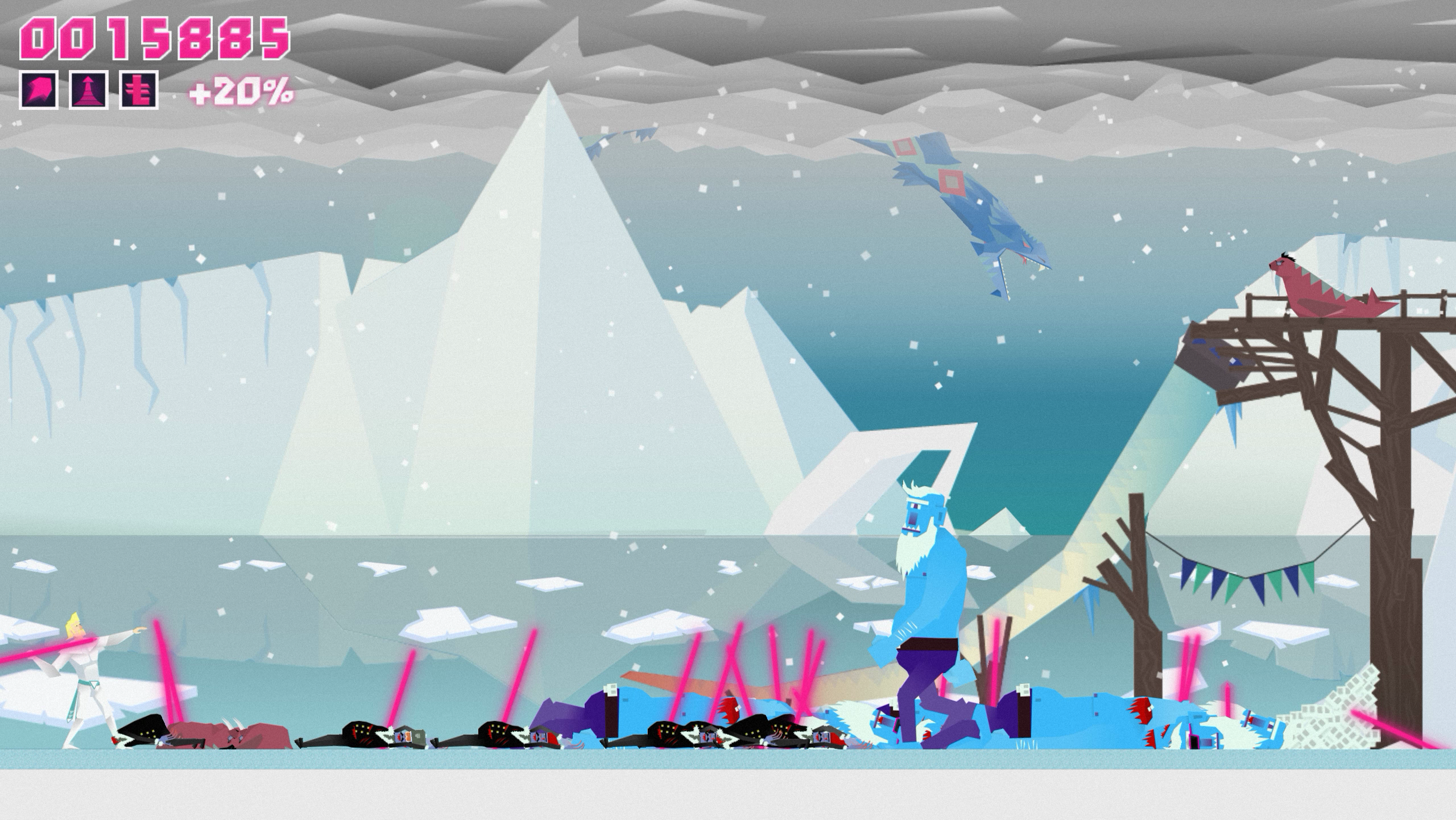 Typically, you can fell any enemy with a spear or two to the body, or you can get a well-placed headshot netting some bonus multipliers. Once you start netting those multipliers, gameplay gets downright addicting. Every headshot (which comes early and often at any skill level) feels like a satisfying triumph, while every missed shot feels like an atrocity laid bare in front of the Lichtgods. Creating and dominating combo’s was a rush I haven’t felt since Resogun.

Lichtspeer sports a fair amount of enemy diversity to keep things interesting. While there are always the slow, plodding enemies, there are similar running zombies, giants that takes two body hits, fish that jump in and out of water, wizards that shoot destructible spells and more. At some of my best moments with the game, I felt completely overwhelmed by the variations of enemies and attack styles surrounding me… before mowing right through them. 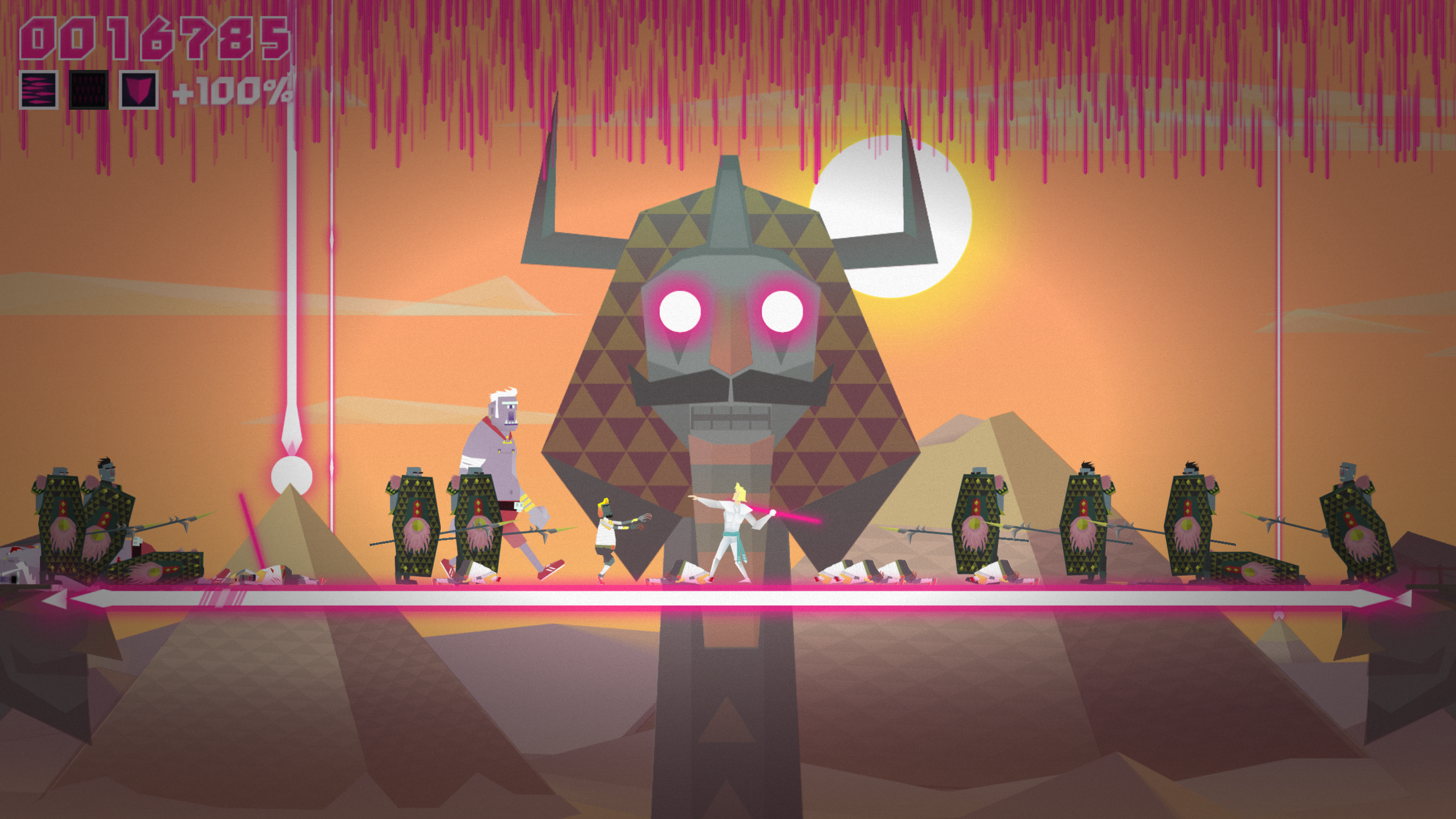 Also, to mix up the diversity of the gameplay, the game is peppered with minor bosses with unique mechanics and strategies. Sure — you will always be using your Lichtspeer to defeat them, but each boss was unique enough that I would get excited to see what was next.

While the worlds are all uniquely designed with interesting backdrops, the true hero of the game is the fantastic artstyle. Popping with neon colors, deep pinks/purples, and lasers, everything about the over-the-top aesthetic is everything you want from an indie title. And while the theme of 80’s retro-futuristic chic isn’t completely novel (looking at you Far Cry 3: Blood Dragon), there is so little of it on home consoles that the visual style seems fresh. 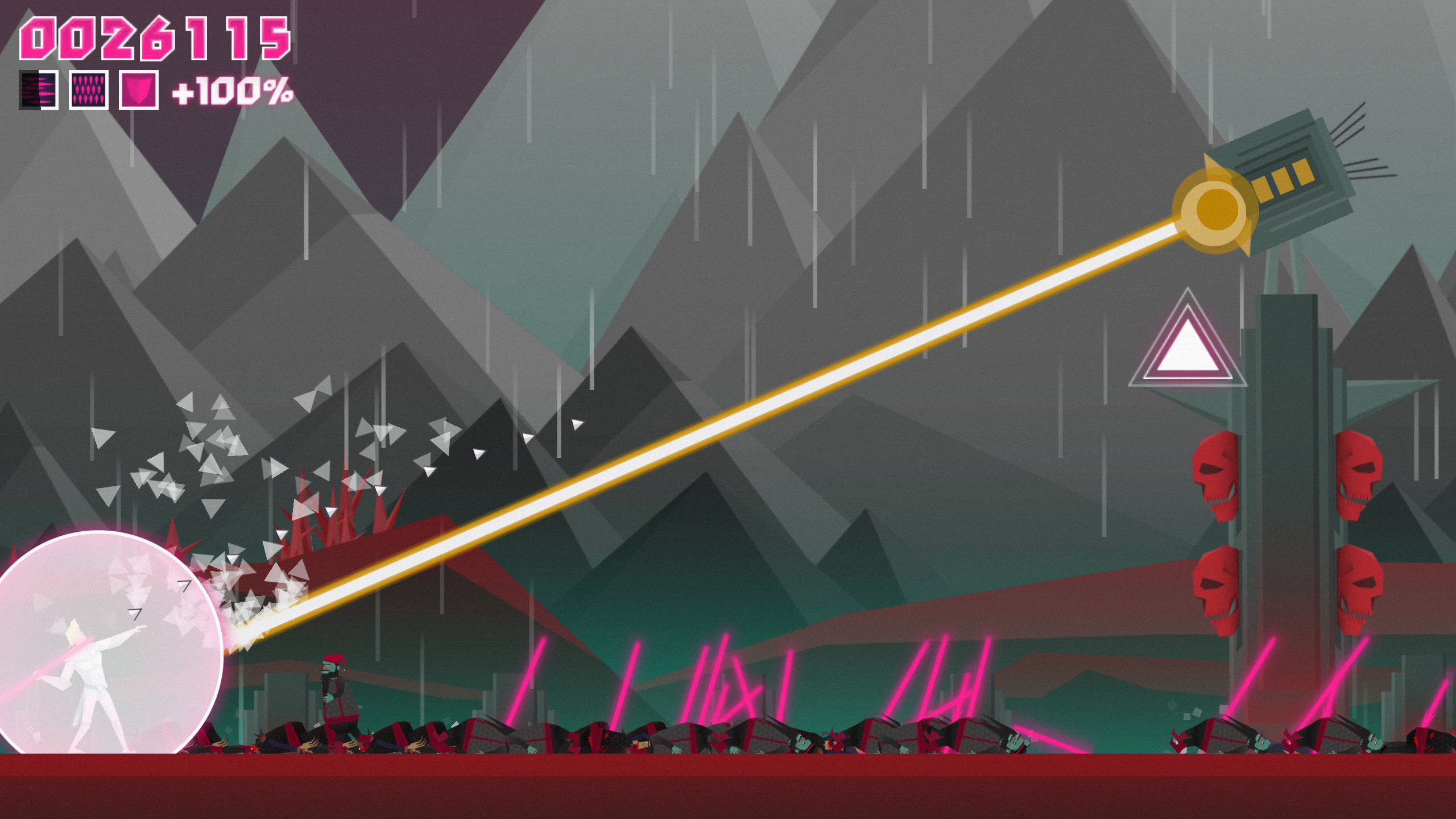 Although the gameplay loop is addicting enough, racking up points will allow you to purchase upgradeable abilities to customize your playstyle. Be it defensive skills like creating a laser shield or the ability to shoot a laser clearing enemies straight in front if you, experimentation is encouraged and rewarding.

Like any arcade title, the game does have difficulty spikes. Thankfully, for novice gamers or those lacking in spear-chucking abilities (myself), death is neither painful nor punitive. Reviving your character when he is eventually mauled happens seconds after death, restarting from the previous checkpoint with no points lost. And while I frequently got into a rage-quit frenzy, it wasn’t because the game was unfair – it was that I could tell I was misaligning my spear-throws or misjudging my enemy-slaying priorities. 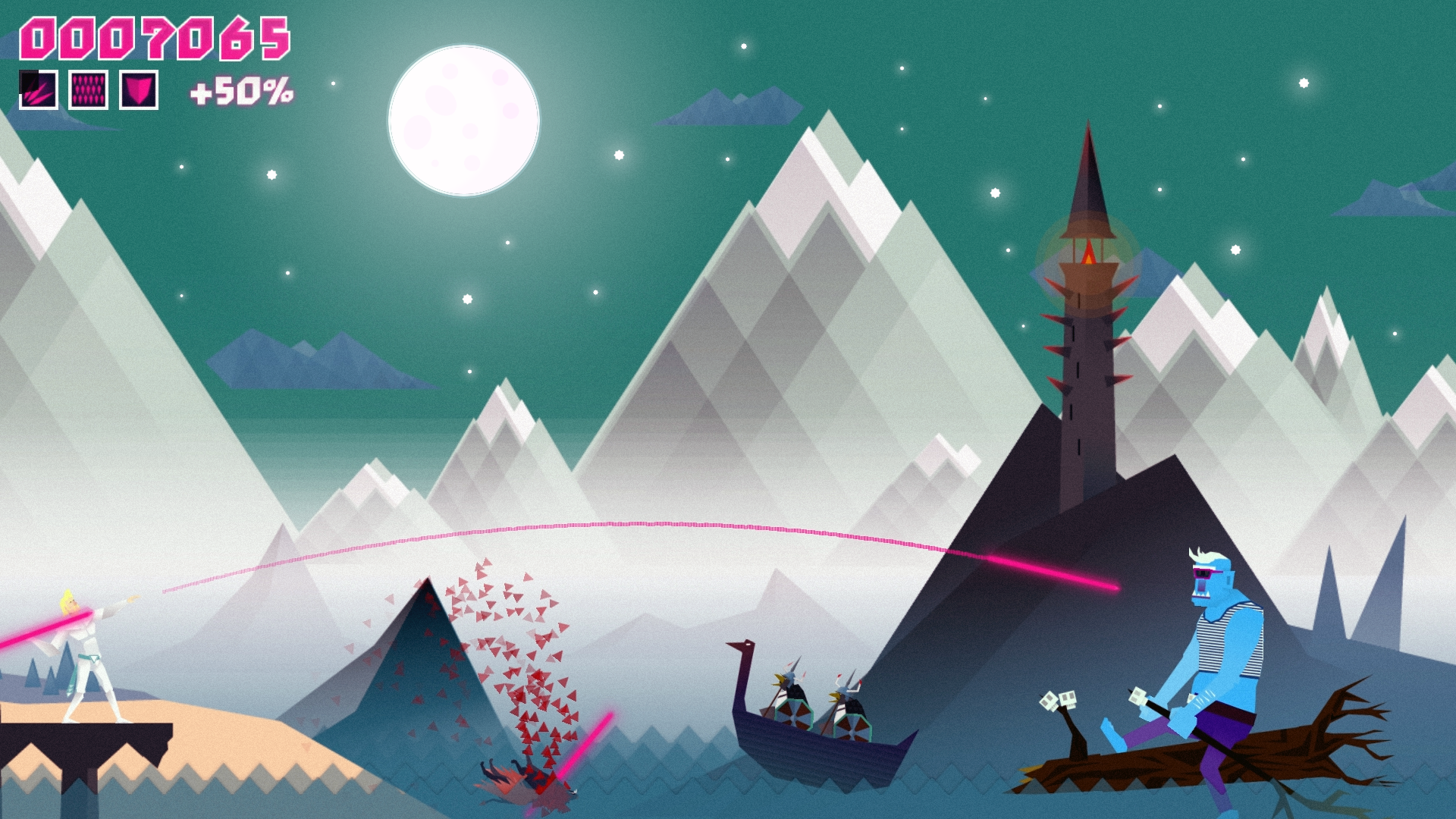 That isn’t to say that cheapshots don’t occasionally pop up. As part of the game’s design is based in over-the-top action, occasionally distracting point pop-ups and blood spurts would cover or obscure some smaller enemies. And though that is annoying, it occurred few and far between and wouldn’t be a problem if I wasn’t better in the first place.

To promote some replayability, Lichtspeer offers a Regular Mode, a New Game Plus Mode, and a Rage Quit Mode (that lives up to its name, thanks to more and faster enemies). Further, each level has its own high score, objectives, and bonus objectives to get you back in the game. More importantly, the game design works – I was always stuck thinking “one more round,” even after being mauled by walruses for what seemed like the hundredth time. 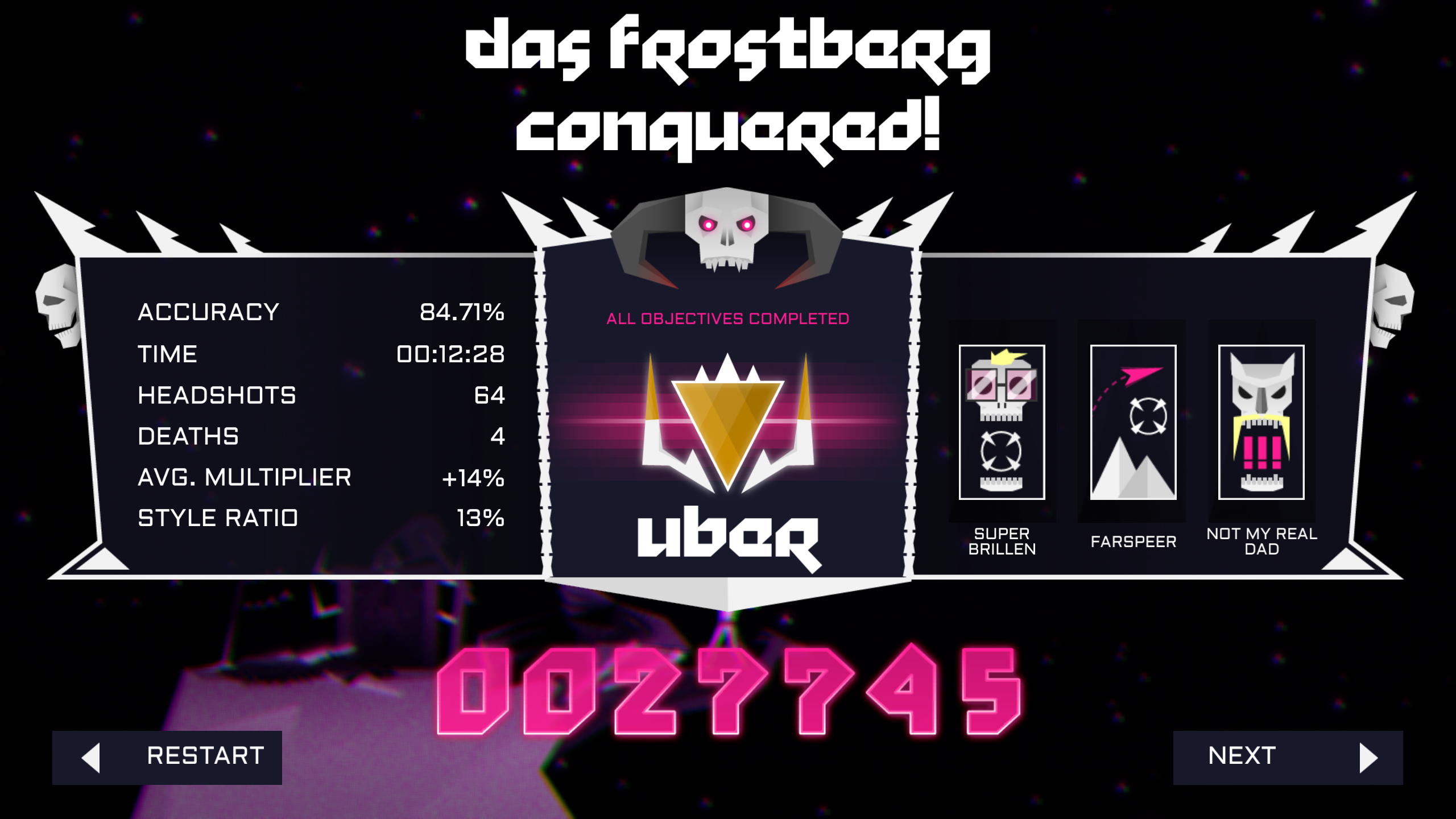 Though I preferred the pinpoint accuracy playing on PC using mouse and keyboard, the game adapts well to a controller, making it an easy recommendation on any system you hope to play it on. However, some common sense mapping options like being able to change trajectory with the up and down directional buttons would have made for a more pleasing controller experience.

Lichtspeer won’t have the mass appeal of the AAA games coming out this Fall, but it is more than worthy of your time. With a fun and over the top aesthetic mixed with simplistic game design, Lichtspeer is pure arcade bliss with all the hooks I’ve been looking for in an indie title. Lichtspeer: Double Speer Edition will be bringing a new save system, difficulty tweaks, and a co-op mode to the game on Nintendo Switch September 7.