MAGFest made the surprise announcement following a series of allegations from staff and volunteers who created a dedicated site last year.

The official MAGfest (an organization that hosts multiple events in celebration of videogame music) Twitter account dropped a huge bomb of a statement: effective immediately all six of the Board of Directors members have resigned. And in additional news, three new board members have been appointed as of now. You can read the statement below or go here for more information:

The MAGFest Board of Directors have resigned, effective immediately. MAGFest starts a new chapter today, but first we want to thank you all for your support from the bottom of our hearts. <3 More information here: https://t.co/q6VcyCHFB1 pic.twitter.com/KqV8qxCMAZ 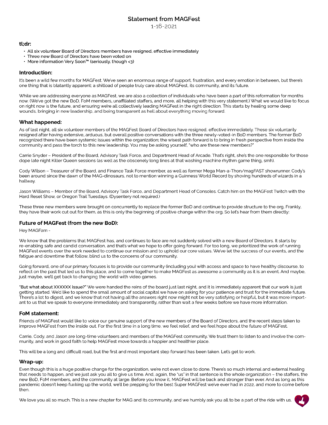 According to the statement, MAGfest will be “healing some deep wounds, bringing in new leadership, and being transparent as hell about everything moving forward.” They also stated that “Going forward, one of our primary focuses is to provide our community (including you) with access and space to have healthy discourse, to reflect on the past that led us to this place, and to come together to make MAGFest as awesome a community as it is an event. And maybe, just maybe, we’ll get back to changing the world with video games.”

The Board’s resignation follows a series of allegations made against them primarily by a group know as “Friends of MAGfest” made up of staff members and volunteers. On November 19th, 2020, this group created a site devoted to bringing to light the Board’s abuse of power. The website originally stated their purpose was “to inform the community that MAGFest is facing an unprecedented, existential threat — the MAGFest Board of Directors and Executive Director.” The group also released a statement in response to the recent news, giving their full support of the decision and pledging to work with MAGfest to “bring the organization into a new and better era.”

Some of the complaints involved inappropriate actions against both staff members and volunteers by both the Board of Directors and Executive Director which include retaliatory firings and disciplinary actions for bringing up internal issues, harassment and threats against employees, creating a “culture of fear,” and other issues.

While the Board has been replaced, as of now there has been no news on whether Executive Director Paul Birtel, who was also called to resign and allegedly plays a large role in the claims made against the organization, will be removed at this time.