The most bizarre video game mashup in years is way more fun than I ever would've imagined.

For months now, I have ironically been championing the “Mario and Rabbids” crossover title that had been rumored to exist. I think most people thought the idea of combining gaming’s most beloved icon in Mario with what are perhaps the most annoying creatures in the gaming world — the Rabbids — sounded truly awful.

Not me, though. I loved the idea of bringing all of these characters together not because I thought it would result in a great game, but (mostly) because I like to watch the world burn. After finally going hands-on with the fully revealed Mario + Rabbids Kingdom Battle at E3 2017 though, it turns out that the game is way better than I ever expected it to be and my faux excitement has become legitimate hype.

Perhaps what is most ironic about my passion for Mario + Rabbids Kingdom Battle is that when we finally saw the game revealed at Ubisoft’s E3 conference, it turned out that it played like a strategy RPG. Here’s the catch: I don’t play strategy RPGs. When I finally dove into the game on the show floor, I didn’t know what to expect as a novice of the genre.

After learning how the basics worked, it wasn’t long before I was dashing in to melee attack enemy Rabbids before then ducking back into cover and blasting them with a shot from my arm canon. In typical Nintendo fashion — even though the game is developed by Ubisoft — I felt eased into the mechanics. 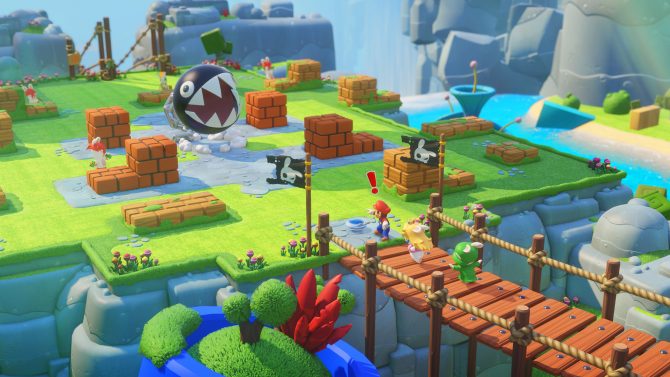 In typical Nintendo fashion — even though the game is developed by Ubisoft — I felt eased into the mechanics.

That’s not to say however that Mario + Rabbids is for novices, by any means. After my first few combat encounters, the game started to introduce more and more mechanics as well as raise the difficulty of said encounters. I started to learn that I could utilize two attacks in the same turn — one melee and one ranged — if planned out carefully.

In addition, I began using other characters on the field to vault into the air and gain better positioning on the field. Plus, there were a handful of environmental hazards like fire boxes that would set enemy Rabbids ablaze if shot, as well as Chain Chomps that would attack anything within their reach. Realizing how to best utilize these environmental hazards to my benefit added that extra layer of strategy that is needed in these kind of games.

By the end of my demo, I found myself placed into combat situations where I carefully needed to plan out my moves in advance before hastily moving forward. As someone new to strategy RPGs, I really fell in love with how Mario + Rabbids played and I hope that the same will be able to be said for those more familiar with the genre. 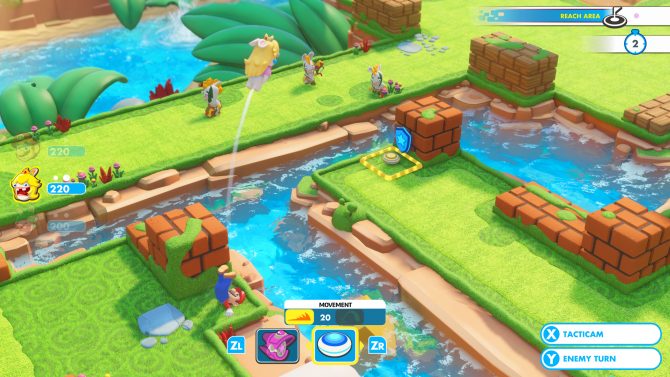 Realizing how to best utilize these environmental hazards to my benefit added that extra layer of strategy that is needed in these kind of games.

Outside of the enjoyable combat, the other thing that really stood out to me was the vibrant and colorful world that I traversed. In between enemy encounters, I wandered through some truly beautiful environments. I’m not sure what kingdom Mario + Rabbids formally takes place in, but wherever it is, it looks great. While the Switch might not be as powerful as the Xbox One or PS4, I really found Mario + Rabbids to be one of the prettier games that I played throughout E3: it just goes to show that (sometimes) it’s less about raw internal power and more about art style.

Another cool thing I started to notice was how the game blended elements of both the Mario and Rabbid worlds. For instance, one part of my session had me trying to collect eight red coins, which those familiar with Mario platformers will know is a long standing time-based objective seen in many titles. I also traveled through a fair amount of warp pipes only to discover new areas with special goodies waiting for me.

The humor though is much more akin to the Rabbids games and is wacky and loud as a result. We’ll see if this type of obnoxious humor begins to wear thin [Editors note: Like the persistent existence of Minions] in the full game, but in my short amount of time spent with Mario + Rabbids Kingdom Battle, I thought it worked well. 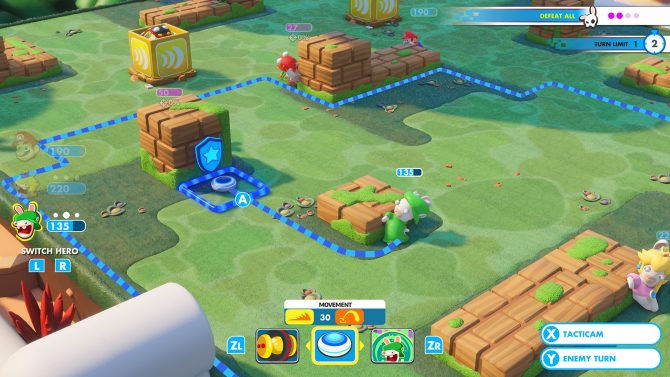 While the Switch might not be as powerful as the Xbox One or PS4, I really found Mario + Rabbids to be one of the prettier games that I played throughout E3.

The one thing I realized after stepping away from my time with Mario + Rabbids Kingdom Battle was just how much I smiled while playing. There’s a certain charm to the game that I didn’t expect considering the Rabbids are anything but charming. The art style of Kingdom Battle though — in accompaniment with the oversized, goofy clothes that the Rabbid characters were wearing — made me crack up.

Even though the entire purpose of playing video games is to have fun, it’s rare for me to have a big smile while playing any game. For the entirety of my twenty or so minutes with Mario + Rabbids Kingdom Battle, I’m almost positive that I had a goofy grin plastered across my face.

After playing Mario +Rabbids Kingdom Battle for only a short time, I was completely sold on the game. Not only is the world colorful and unique, but the combat seems to have the right amount of depth that should keep both seasoned and new fans of strategy RPGs entertained. We’ll have to see if the Rabbids begin to wear thin the more that you play the game but for now, I think the combination of these two worlds is working far better than I ever would have anticipated. If you have reservations with the game, I suggest you try to go hands-on with it for yourself before passing judgement; I think you’ll find yourself pleasantly surprised just like I was.