Nintendo capped off their Metroid; Samus Returns Treehouse coverage with a reveal of a Special Edition and two brand new amiibo!

At the end of the detailed coverage of the newly announced remake, Metroid: Samus Returns, a few tidbits were dropped about extended features for the game. The first was all amiibo focused: two new figurines are coming out as a compliment to the adventure. Alongside that, the two Samus amiibo that are out there (Zero Suit and Super Smash) will also work with the title. Additionally, a special edition with a large soundtrack and revervisible cover art will be available for the September 15th launch on the 3DS. 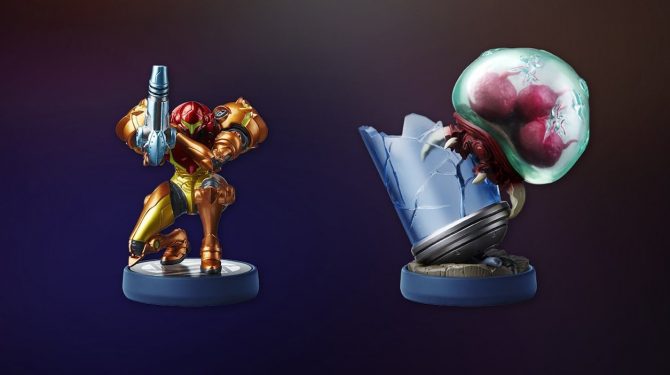 The two new amiibo are yet another Samus and an actual Metroid. The first figure is neat with our female protagonist taking the same pose from the iconic cover art from the Game Boy original. The energy stealing snowglobe takes the cake in terms of the amiibo as it highly detailed and even ‘squishy’ to give that gooey feeling of a living organism. The functionality of these two new figures or the two old ones has not been announced with the hosts teasing that news in the future.

The Special Edition contains a few items that will appeal to old fans of the series. The soundtrack will contain ‘around 25 tracks’ and has remixes of a lot of songs from Metroid II: Return of Samus. This OST is titled ‘Samus Archives’ and will make those looking for retro tunes happy. The cover is also reversible that again will showcase the original crouching art from the Game Boy case and cartridge. The SE will cost $49.99 USD as opposed to the regular edition’s $39.99 USD.

With all this oldschool love for a classic series that had its start in 2D, it’s hard not to anxious for September to roll around. But, as we get closer to the fall, more information will become available for this needed remake a we’ll be there to bring that to your eager eyes. Nintendo provided more information and screenshots for the recently announced Metroid: Samus Returns with some hints of what the game has in store.