Microsoft just announced its financial results for the fourth quarter of fiscal year 2018, and they're very positive.

Microsoft officially disclosed its financial results for the fourth quarter of fiscal year 2018, related to the period between April 1st and June 30th.

It’s worth mentioning that unlike many other companies, Microsoft’s fiscal year begins in July and ends in June.

The announcement included relevant information on the performance of the Xbox division. In the table below you can check out the results of the “More Personal Computing” segment, which includes the Xbox business. 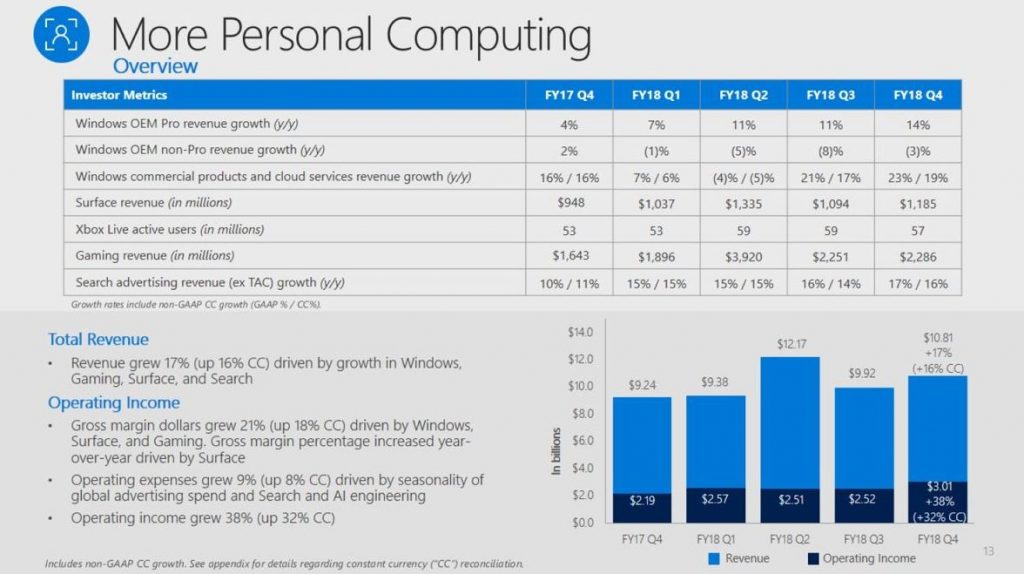 We learn that gaming revenue increased by a massive 39% year-on-year with Xbox software and services leading the charge and increasing by 36%. Xbox Live monthly active users grew 8% year-on-year to 57 million.

Gaming was identified as a growth driver for both revenue and gross margin for the whole segment.

The number of Xbox Live active users is actually down by two million from the 59 million registered for the second and third quarters, but that’s normal since the summer months are normally slower than winter and spring.

Gaming revenue, on the other hand, also grew since the past quarter, from 2.251 billion dollars to 2.286 billion dollars. Revenue for the gaming business alone during the whole fiscal year ended on June 30th was 10.353 billion dollars, which is a really strong result.

If you’d like to compare today’s results with that of the third quarter of fiscal year 2018 (between January 1st and March 31st, 2017), you can check them out in our dedicated article.

If you still don’t have an Xbox One X but want in on all the enhancements, you can purchase one on Amazon. If you prefer something less over-the-top, you can grab an Xbox One S.