Today a mysterious but quite interesting certification appeared on the database of the Federal Communications Commission. The certification, requested by Sony Interactive Entertainment, is for a “wireless adaptor” with the product code CUH-ZWA1U.

The “CUH” series of codes is associated with PS4 and its accessories, indicating that the adapter is related to Sony’s console, even if the nature of this relation is where the mystery lays. Below you can see the specifications, while the drawing of the label and its position is at the bottom of the post. 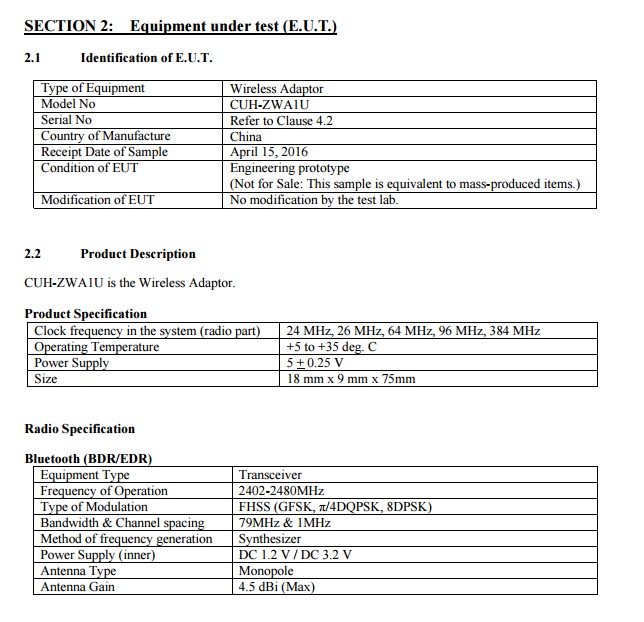 Of course the PS4 already has its own internal wireless modules, so what could this be for?

The first thing that comes to mind is an adapter to add support for 5 Ghz wi-fi to the PS4, since it’s currently unsupported, but that’s quite unlikely. In fact, the radio specifications specify that the adapter is actually a Bluetooth adapter, matching quite closely the specs of the internal one currently built into the console.

The frequency is also the same, which is not surprising, since Bluetooth devices operate on a quite standardize frequency range, which means that such an accessory appears to be redundant with the console’s default equipment.

One could go out on a limb and imagine a “slim” PS4 model without an internal Bluetooth module, but that’s unlikely. Bluetooth is used for the DualShock 4 controller, so it would be strange to make an optional accessory for it. This kind of hypothesis would be more acceptable if we were looking at a standard wireless LAN adapter, but that’s not what this is.

Another, more likely possibility could be extrapolated from the “Z” at the beginning of the second part of the code. The letter is normally associated with controllers. The CUH-ZWA1U could be a proprietary dongle to connect a DualShock 4 to other devices like PCs, ensuring full compatibility for games and the recently released remote play.

A second possible theory could be an adapter to be able to connect any Bluetooth headset to the console. At the moment the PS4 only supports a relatively small number of headsets compatible with its internal Bluetooth module, but a few third party external adapters supporting the rest do exist. Sony might be planning to offer support with a proprietary accessory.

The code also appears to be very different from the dongles used for Sony’s own headsets, that normally have the same code with a single digit variation.

Unfortunately most of the documentation is still covered by confidentiality, and will be kept under wraps until January 2017, which means that we’ll probably have to wait for an official announcement to know what exactly this adapter is for. 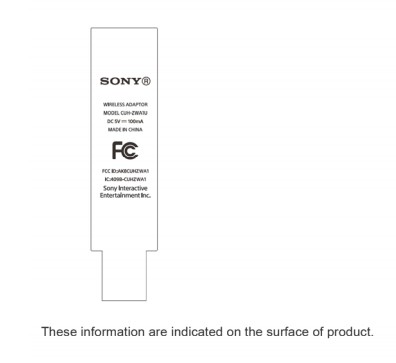