EA’s NHL series has been fighting an uphill battle since multiple modes and features were stripped away during the generational console jump with NHL 15. EA Canada has worked hard since then to bring the games back to their previous quality level and, with NHL 17, has delivered us a good hockey game on par with older entries in the series. While a few menu problems and other small issues hold the game back from greatness, NHL 17 is a fulfilling experience for fans of the series who are willing to look past the game’s flaws and find the engaging hockey experience underneath. 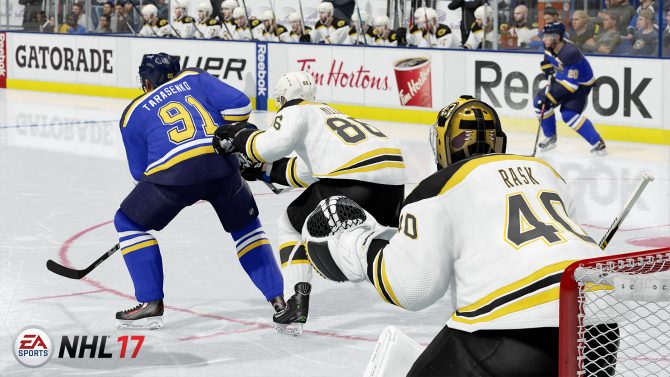 While NHL 17’s controls are a little awkward to get used to at first, they become surprisingly accurate over time. Players are able to move around with the left control-stick and execute other actions (such as passing with button press) when not trying to score. Interestingly, when the player attempts to score a goal, the controls change, allowing you to aim the shot with the left control-stick, and shoot with a flick of the right one. The controls feel fair and whether you are playing as a center or a goalie, they feel very precise and accurate once the player gets used to them.

The game also features an on-ice trainer giving player feedback on what to do during games. Coaching feedback in between periods also keeps players informed on how they are doing and how to improve. Unfortunately, the on-ice trainer can sometimes clutter the screen and block crucial parts, leading to a few unwanted and unfair goals in a game that is usually fair. In general, NHL 17’s menus sub-par and slow to navigate. Hopefully the menus can be cleaned up and are quicker to go through in future entries. It would make the game a more satisfying pick-up-and-play experience. 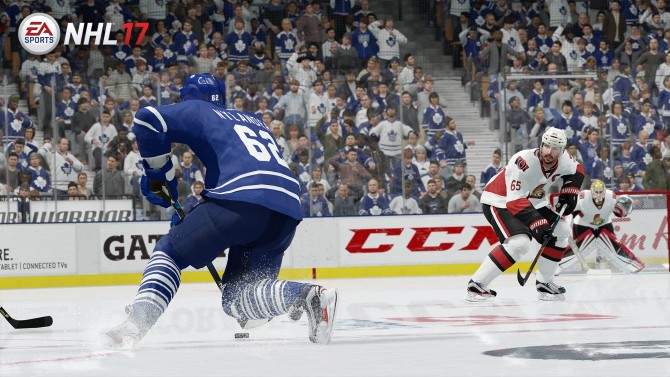 The game has the basic Play Now, Season, and Playoff modes that allow players to play cut-and-dry as their favorite teams. All these modes function as they are supposed to, and are good modes for those just testing out the game and its mechanics, just like the game’s Practice mode.

New to NHL 17 is the World Cup of Hockey mode, which coincides with the event of the same name that is taking place this year. Players can chose one of eight teams, and go head-to-head to win the World Cup of Hockey. It is a fun mode that lets one use a variety of players and teams that would not be available to them otherwise. While the absence of a cutscene that features your team getting the trophy is jarring, it is an interesting inclusion that is unique from previous entries in the series. 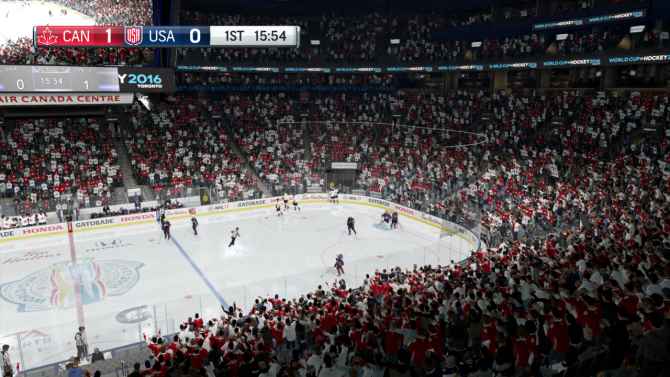 Be a Pro mode returns in NHL 17. Similar to the Road to the Show mode in MLB The Show, it allows players to create there own character, get drafted by the NHL, and work their way up to become a famous player. The character creator in this mode is very detailed, as I was almost able to make a near-to-life version of myself within the game. Customization is great in other modes too, such as franchise, where you can work on almost every detail when you relocate your stadium.

There are also updates whenever your player hits a big milestone, making it feel like an authentic and personal experience. This is great mode for those looking to live out their fantasy dreams of being an actual hockey player. While coaching can sometimes be unfair, with the manager punishing you severely when you do bad on defense regardless of offense performance, it is still quite fun. 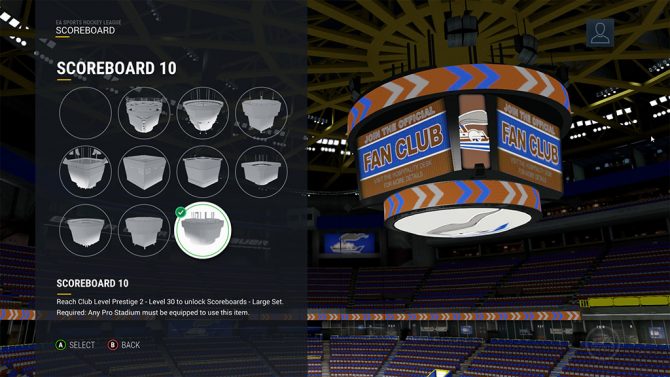 Draft Champions was added to NHL 17 this year, and works just as well as it does in EA’s other sports games. Players have been separated into “themes” like Canadian Heritage and Under 25 Years Old, giving the player more control on who they will draft. Drafting both modern and classic players is very fun. In this game players obtained in this mode can also be used in Ultimate Team, making the mode the most important it has ever been in any of EA’s games yet. Ultimate Team also functions well, and while the micro-transactions of this mode are still unwelcome, those who enjoy this type of mode in their sports games will still like it in NHL 17. 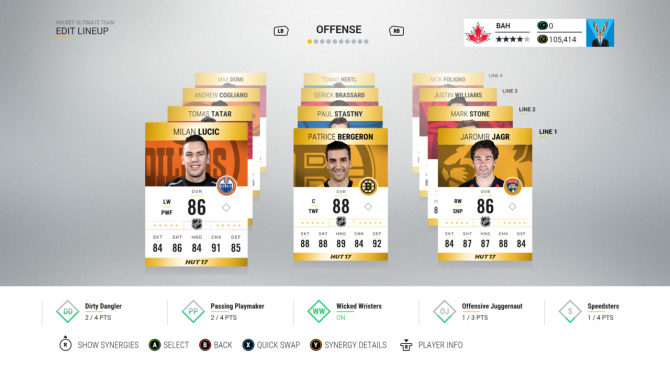 In the Shootout mode, two teams participate in a shootout with a single player from trying to score on the goalie with any interference. While it doesn’t have the longevity or depth of the other modes in the game, it is still a fun mode to play with friends or online.

The Be a GM mode from previous entries has been upgraded to a full fledged Franchise mode and allows players to take control of multiple different aspects of managing a team, such as editing the team’s lineup and strategies, pricing concessions, or completely relocating the team to a different city. As mentioned before, this mode offers players a great deal of customization, especially when moving to brand new stadiums, allowing player to customize more parts of the stadium, such as seat color and goal celebrations. Franchise mode will be a huge time-sink for those who get invested in it. 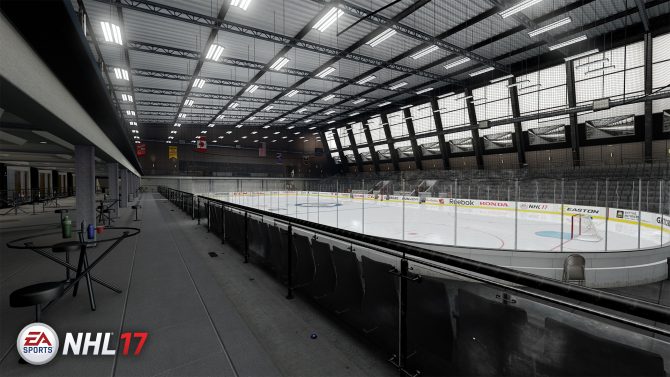 In the online matches, there was no lag whatsoever which made for a quick and smooth online hockey playing experience.  NHL 17 also features something called the EASHL, or the EA Sports Hockey League. It allows up to five player to create a team and fight others in hockey matches. It certainly bolsters the E-Sports reputation of NHL 17, and in one of the more detailed modes in the game, with many matchmaking options, which will make it a satisfying experience for those playing it. 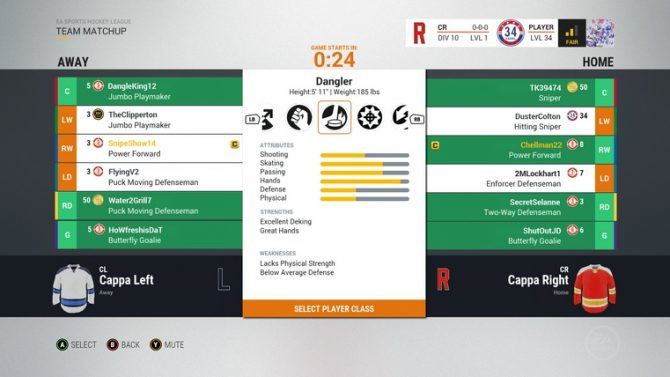 NHL 17’s graphics are also very good. Models have just enough detail to where you can tell every player apart from each other, making a more authentic and realistic experience. The title’s commentary is also done well, and did not repeat itself very much. The inclusion of live-action scenes with the commentators was a surprising, but welcome edition that made me feel like I was watching an actual hockey game on TV.

One big problem that NHL 17 suffers from is long load times on PS4. When entering some the game’s different modes, I was stuck on loading screens upwards of 40 seconds. While loading times during actual games are near non-existent, long loading times to get to those modes, in combination with the cumbersome menus, hurt the pacing of the experience. 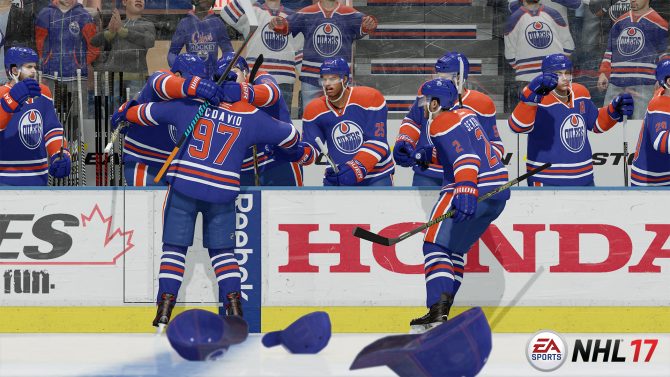 NHL 17 is a very good hockey simulation game. It’s gameplay works well, it contains a plethora of well executed modes, and has a stable online experience. Sadly, some issues with the menus and on-ice trainer, along with long loading times, can cause frustration, especially when new players are still trying to understand the NHL 17’s controls. While newcomers may be a bit off-put by the game at first if they don’t invest a lot of time with it,those who stick with the game and fans of the series will have a great time, even though there are still a few things that need to be improved on in the future. PS4 Slim Gets Six Bundles Between North America and Europe: Uncharted 4, Call of Duty and More NHL 17’s New Trailer is All About Brand Building