Square Enix CEO Yosuke Matsuda reveals that Yoko Taro's NieR: Automata did much better than expected, and talks about plans for the future.

Today Square Enix released the transcripts of the latest quarterly conference for investors, providing some interesting information about its business.

First of all, CEO Yosuke Matsuda mentioned that NieR: Automata was an earnings contributor in the past quarter (with Final Fantasy XV being the greatest contributor), generating sales “significantly above” the plans.

At the same time, Matsuda-san brought up something that has been misinterpreted by a few websites. Showing the slide below, he explained that the games marked “FY2018/3 and beyond” will be launched “in the next three years or so.”

Some took it as an indication that Matsuda-san was talking specifically about Kingdom Hearts III and Final Fantasy VII Remake, but that’s not what the slide shows. It includes the Marvel IP License (which was completely omitted in some of the articles I saw out there), the first game of which will be revealed only in 2018.

Square Enix Reveals More Details About New The Avengers Game: Will Be a Completely Original Story

Matsuda-san was obviously making a blanket statement about all the games included in the category, and not providing specific information on Kingdom Hearts III and Final Fantasy VII Remake, which could easily come much earlier than in three years. On the other hand, Marvel’s Avengers game is realistically within a three year time frame, since it will be revealed next year.

Basically, it’s much ado about nothing for what Kingdom Hearts III and Final Fantasy VII Remake are concerned. Nothing new was shared on that front. 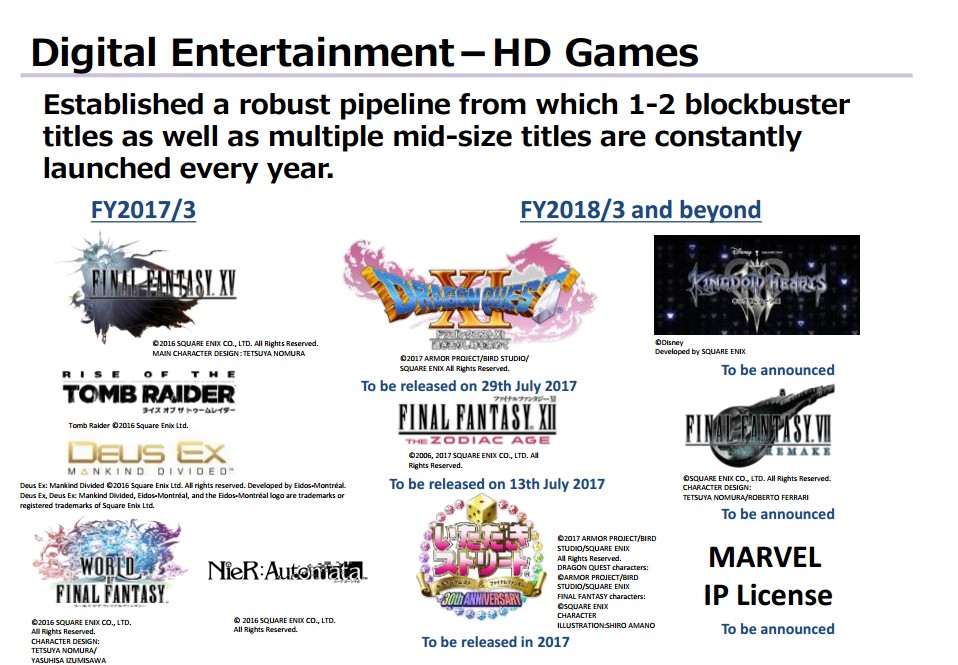 On top of that, we learn that the company plans to enhance digital sales by updating and integrating its own sales websites. They’re also developing an app version to “create a design that provides our customers with a seamless, user-friendly means of making purchases.”

Another focus is “Multi Platform Utilization,” which Matsuda-san described as “the concept of essentially providing our contents on all of our platforms.”

Square Enix also has plans for North America and Europe, aiming to “aggressively roll out both catalog and new titles to the Western markets going forward.”

Last, but not least, Matsuda-san expressed the intention to design games able to generate recurring revenue streams in the future.

“Titles that have become global hits recently have tended to be offered via the “Games as a Service” model, and we believe this is going to be the mainstream model for gaming in the future. In developing future titles, we will approach game design with a mind to generate recurring revenue streams.” Square Enix president Yosuke Matsuda confirmed for the first time Project Athia, coming to PS5 first and PC later on, will be an open-world game. Square Enix CEO Feels that Each Final Fantasy Is “Essentially a New IP”; Talks Games as a Service