Yoko Taro talked about the issue defined "open-world fatigue" and how he gave players the sensation of freedom in NieR and NieR: Automata.

Today, during a panel at the Game Developer Conference in San Francisco, that DualShockers attended, NieR: Automata Director Yoko Taro explained how he created games that give the sensation of freedom without being open-world titles.

Keep in mind that this article includes spoilers on NieR and NieR: Automata, so if you have not played them and want to do so completely blind, you may want to just go back to the front page.

Funnily, he started his talk by jokingly (probably) mentioning that the structure of the first NieR was basically stolen from The Legend of Zelda: Ocarina of Time.

Yoko Taro moved on to mention the idea of “open-world fatigue” that is mostly focused in the west where there are many open world games released in a row, but is also being discussed in Japan. 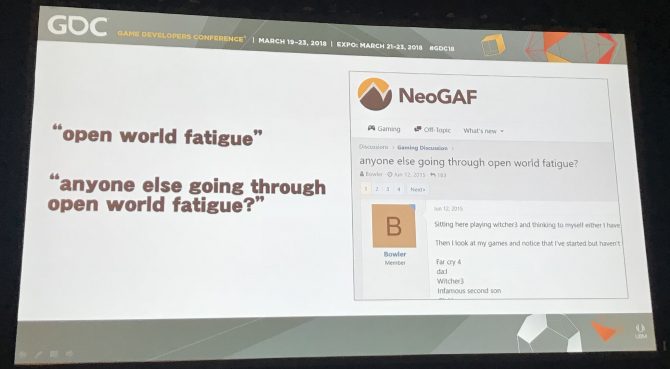 Open-world games have vast maps, many quests, and lots of other things to do like crafting and more. You can play them for thousands of hours and still not feel like you’re playing nearly enough.

In the beginning, the genre felt fresh, but since there have been so many, people have been starting to complain about having too much freedom. Once those vast maps, many quests, and additional elements became ordinary, people began to think of them as a chore. 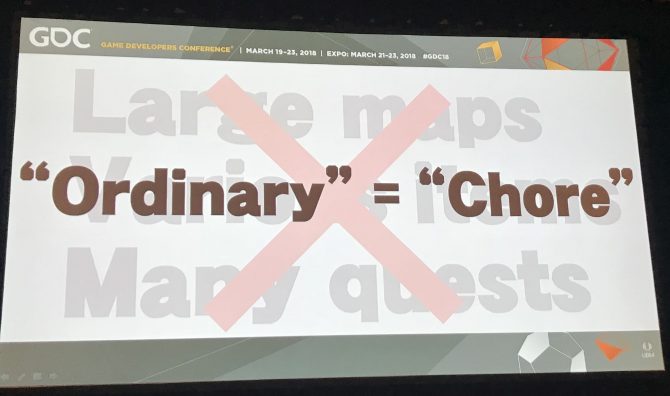 According to Yoko Taro, a high level of freedom does not necessarily equate to the actual sensation of feeling free. This is something very unique to games. 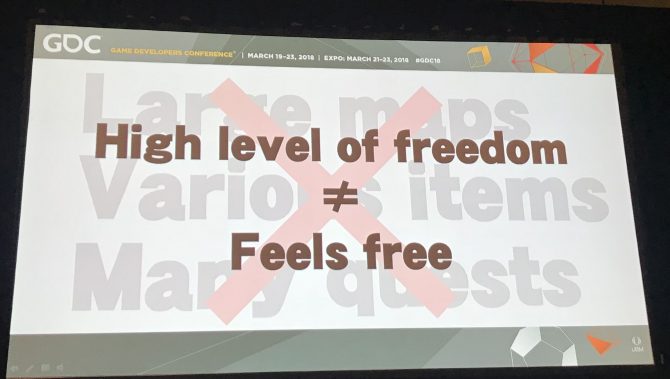 Game creators include a ton of quests, but then gamers feel that they have to complete every single one, otherwise, they feel like they’re missing out on something. This turns the gameplay into an obligation.

How can this be solved?

Yoko Taro himself was “absolutely shocked” when he saw the ability to walk on the top of the level to reach the warp zone in Super Mario Bros. It smashed his entire idea of how the game was framed.

In Grand Theft Auto IV, he was surprised by the fact that you can’t talk to NPCs in the city. In most JRPGs you can, and he couldn’t believe that in a game with such an enormous budget they weren’t able to implement something like that.

Yet, it actually makes sense, since in the real world we don’t go around talking to everyone we meet. In that sense, the game is actually imitating the real world.

In these games, in order to make people actually feel a sense of freedom, there is a “frame” that inhibits freedom itself.

In the slide above, the inner circle represents the world. The size of it doesn’t matter, but the circle itself is the important part, as it represents what the player believes is the limit of the scope of the world. When the developer expands that frame to the outer circle, is when the player actually feels free. 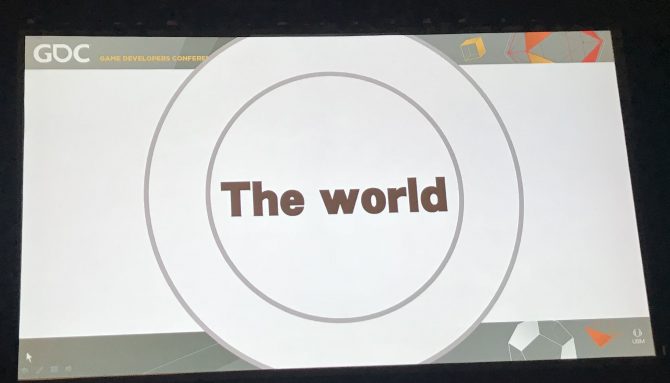 The moment in which players feel free is when they perceive the limit of the world suddenly expanding. For instance, when riding a vehicle they didn’t think they could. If you thought you could not do something and discover you actually can, it triggers the sensation of freedom.

According to Yoko Taro, “freedom is in a future that you did not have in the past.” He feels that this sentence is really cool.

NieR is not a triple-A game and the developers did not have the budget to extend the world indefinitely, so Yoko Taro created an additional framework inside the world, making sure that the players would feel the moment when the world expands.

Basically, he made players incorrectly feel that the inner framework was the limit of the world, in order to surprise them when the rest was opened up to them.

The game is structured in a way that causes the players to go through the same map three times. The reason is simple: the team did not have the budget required to create a large map.

They first presented the character as a child and then as a youth, and that leads to Ending A. Of course, that’s also “a copy” of Ocarina of Time.

After that, the player can replay the part of the game in which the character is older, but he can hear the enemies’ voices, and this tells the story with a “flipside” to it. Concluding this part of the story leads to Ending B.

With that in mind, when he worked on NieR: Automata, everyone already knew that NieR had a flipside. One thing remained unchanged: the map is still reused multiple times. Yet, unlike the first game, you first play as a girl, and that leads to Ending A. Then you play as a boy, and that serves as a flipside showing the world for what it truly is, leading to Ending B.

After ending B, the game shows an entirely new chapter leading to Ending C. The reason for that is that fans of the previous games will play with the assumption that there will be an additional route. Yoko Taro wanted to shatter that assumption by showing that there was still more after that, giving players the experience of a new world opening up.

Yoko Taro also talked about the messages of encouragement from across the world that players can share at the end of the game. This creates a positive loop in which players who were encouraged by others can do the same in turn.

The truth is that this “genius idea” is not originally his either. He “stole this one too.”

He was deeply inspired by the campaign titled Coca-Cola Small World Machine, which was created to bring people from India and Pakistan together. You can see it below.

Yoko Taro wanted to use this final message in NieR: Automata. By having players sharing positive messages with people from other countries he wanted them to realize that the person they were communicating with is also, just like themselves, a gamer.

Yet, he ended up giving up on that. The reason behind this decision is that he felt that if he did it, he would be imposing his own principles on the players.

Players were instead given the freedom to choose their own messages among many different options. This is because Yoko Taro believes that games should allow gamers to make their own decisions, without forcing the opinions of creators on them. He doesn’t know what players will think when they see this feature, and that’s exactly the kind of video game “freedom” he wanted to create.

Quite obviously, Yoko Taro’s ideas resonated with many players, as we recently learned that NieR: Automata passed 2.5 million units summing up sales and shipments.

If you are unfamiliar with the game, you can also read our review. NieR: Automata is currently available worldwide for PS4 and PC via Steam. Almost 4 years after its original release, a final cheat code has been discovered in NieR: Automata that lets you skip most of the game.