Nintendo posts its financial results for the first nine months of the fiscal year, including updated sales for Wii U and 3DS.

Nintendo released today its financial results for the first nine months of the current fiscal year, ended on December 31st, 2016, also giving an update on the hardware and software shipments for its Wii U and 3DS consoles. 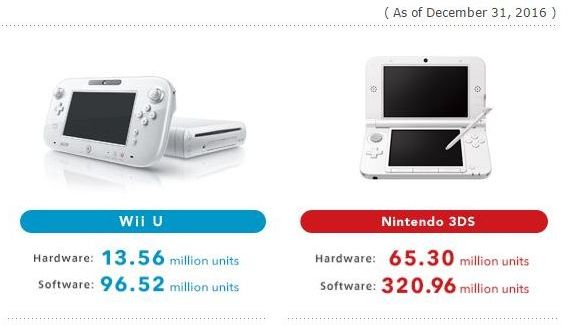 The figures above, compared with historical data, indicate that only 200,000 Wii U units and 3.73 Million 3DS units have been sold between October 1st and December 31st.

Below you can also see a table with the company’s consolidated operating results.

Nintendo provided a statement via press release, giving an extensive explanation of the state of the business. In particular, the announcement boasts 14.69 units sold for Pokémon Sun and Pokémon Moon, and over a million for Super Mario Maker for Nintendo 3DS.

“During the nine months ended December 31, 2016, the worldwide release of Pokémon Sun and Pokémon Moon generated buzz and led to blockbuster sales of 14.69 million units. In addition, Super Mario Maker for Nintendo 3DS surpassed the million-seller mark. The release of the smart device application Pokémon GO led to increased sales of software in the Pokémon series released in the past and drove Nintendo 3DS family hardware sales growth, particularly outside of Japan.

The Nintendo Entertainment System: NES Classic Edition also launched in Japan and overseas in November to widespread popularity. Although the release of some new titles offering amiibo functionality restored some momentum, amiibo sales remained limited to 6.5 million units for figure-type and 6.6 million units for card-type. In addition, there were relatively fewer offerings of downloadable content during this period, so digital sales were also down to a large extent on the same period last year. Along with this background, resulting in an operating income of 26.3 billion yen against net sales of 311.1 billion yen (of which overseas sales were 221.3 billion yen or 71.2% of the total sales).

We have also included 16.7 billion yen of share of profit of entities accounted for using the equity method related to The Pokémon Company and other investments, resulting in an ordinary income of 49.1 billion yen. In addition, due to the sale of part of our equity in the company that manages the Seattle Mariners Major League Baseball team, we recorded gain on sales of investment securities totaling 63.5 billion yen as extraordinary income, meaning that profit attributable to owners of parent was 102.9 billion yen.”

The press release also included the outlook for the full fiscal year.

“We will launch Nintendo Switch, a new home gaming system that diversifies the ways you can play video games, on March 3, 2017 in Japan and overseas. Our launch lineup includes first-party software such as The Legend of Zelda: Breath of the Wild and 1- 2-Switch as well as strong third-party titles.

The Legend of Zelda: Breath of the Wild will release for Wii U on the same day. For Nintendo 3DS, we aim to maintain the buzz surrounding the hit titles Pokémon Sun and Pokémon Moon and Super Mario Maker for Nintendo 3DS, as well as releasing new titles such as Mario Sports Superstars. For smart devices, we plan to release the game application Fire Emblem Heroes on February 2.

We will also follow last December’s release of Super Mario Run for iOS with an Android version in March. To accommodate the releases and operation of these applications, we have revised the release schedule for Animal Crossing, which we had originally planned to release during this period. This title will be released during the next fiscal year. We have revised the financial forecast originally published on October 26, 2016. For details, see the Notice of Full-Year Financial Forecast and Dividend Forecast Modifications issued today (January 31, 2017).”

Below you can find shipments broken down by platform, including the outlook of shipments for the current fiscal year. 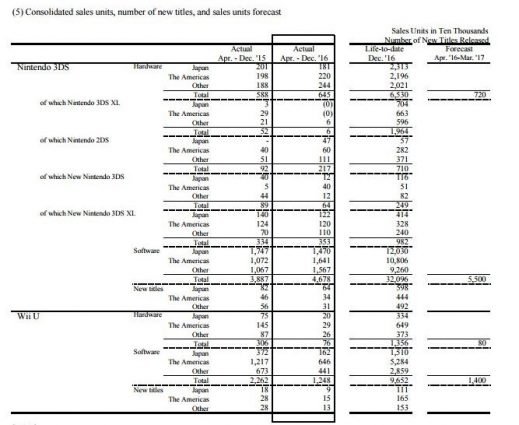 The revision to the full year forecast mentioned above is as follows.

Nintendo provided the reasoning behind the release:

“Based on the sales performance for the nine months ended December 31, 2016 and after, the Company modifies its financial forecast in consideration of the revised sales prospects as well as the revised assumed fixed rate.

Assumed exchange rates after the third quarter and at the end of the fiscal year have been revised from 100 yen to 110 yen per U.S. dollar and from 115 yen to 120 yen per euro.”