Developers should be able to create and release the games they want without dealing with the most aggressive forms of port begging, no matter the console.

Good morning, Nintendo Switch fanbase. Thanks for taking the time out of your day, and I’m sorry for tricking you into this. Take your coat off, grab some Dunkaroos, and take a seat. The broader gaming community has talked it over, and it’s time for a port begging intervention.

All joking aside, it is time for a frank conversation about the gaming community’s occasionally vicious responses to developers and publishers. 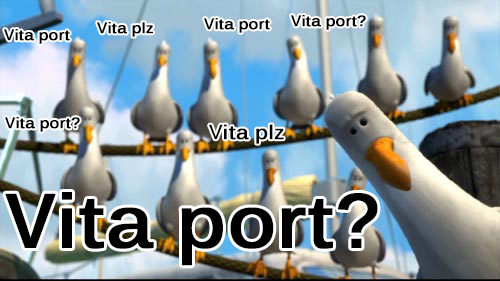 So what is “port begging” and why should you care? The term has carved a way into most gaming communities as shorthand for low-effort requests, asking for games to be ported to another system. Different than the constructive comments, criticisms, or arguments some may make on why a game’s port would make sense for a specific system, port begging is derailing an established conversation or topic to say “Switch port WHEN?!?”

Let me start off with the obvious disclaimer: although I’m addressing this to the Nintendo Switch community, this is a gaming problem as a whole. Though it is momentarily more pervasive with the increasingly popular Nintendo Switch, anyone with a decent long-term memory will remember how Xbox One fans were screaming from the rooftops for ports of PS4 games. Even further back, Sony fans overpowered many comment sections trying to get release parity of Xbox 360 games on PS3. And PC gamers, most of all, have felt the sting of publisher favoritism of the console market over the years.

On top of that, this isn’t an essay on the whole Nintendo Switch community — something I proudly count myself a part of. Instead, this is aimed at the more toxic elements and personas in that fanbase. You know who you are; everyone else, feel free to nod along.

So yes, port begging is a mainstay of the gaming community at large. But for a moment, let’s focus on you — Nintendo Switch fans.

The port begging reached a head over the weekend after an indie darling said they weren’t publishing a game on Nintendo Switch [audible gasp]. Announced earlier last week, it was revealed that the Banjo-Kazooie inspired mascot-platformer A Hat in Time wouldn’t be making it to the Nintendo Switch. No explanation from developer Gears for Breakfast was given, other than a flat-out “no”:

A Hat in Time is not coming to the Switch.

For the record, this news bummed me out — while Gears for Breakfast never confirmed a Nintendo Switch release, I’ve been holding out on buying the game for a possible Switch version because it seemed like a perfect fit. And although there were absolutely normal responses in the replies — the occasional “Darn!” and “Oh well, I’ll grab it on PC” — some responses to developer Gears for Breakfast were outright toxic:

Yes, this is picking some of the worst of the bunch. However, it’s still amazing that people are getting this hostile for not getting a port for an indie game. That’s not even discussing when it is some larger developer — for instance, Blizzard Entertainment’s recent statements that Hearthstone is not being considered for Nintendo Switch — and conversations devolve into developer/publisher moaning and other partisan whining.

Blizzard Has No Plans to Port Hearthstone to Nintendo Switch

And that is only mentioning when the game could feasibly run on Nintendo Switch without major sacrifices. For instance, there is a decent argument that one could expect A Hat in Time or Hearthstone to run on Switch’s hardware; other modern AAA games, not so much. Capcom’s community managers felt this sting, with many people directing vitriol to their personal Twitter accounts because Monster Hunter: World was not going to come to Nintendo Switch:

And I get it — I would love to be chopping down Nergigantes on my occasional flights with Nintendo’s handheld/home console. However, I (and hopefully most of Nintendo Switch’s playerbase) completely understand that Monster Hunter: World was in development years before Capcom even knew that the Nintendo Switch was a thing. Or that Capcom’s design choice centered around making the most impressive — not scalable — use of available technology on the market.

So let’s get this straight: neither developers nor publishers need an articulated reason why they won’t develop a game for your system of choice. Just like we defend developers and content creator’s artistic liberty in the games they create, we should equally appreciate their business decisions. It’s up to the developer if they want to give a rhyme or reason why they aren’t supporting something, but they aren’t obliged to. Full stop.

This isn’t to say that we can’t have some critical discussions on the subject of porting, and missed business opportunities. Everyone (DualShockers included) loves to be the armchair business analyst for developers and publishers, crafting their favorite series’ market strategy. But people don’t know the underpinnings and data driving most market decisions from developers — if there were a goldmine to be plundered, you would imagine a developer wouldn’t hesitate to jump right in. And, let’s repeat, there is no reason to be a jabroni to developers just because you aren’t getting 100% transparency in knowing their business decisions. 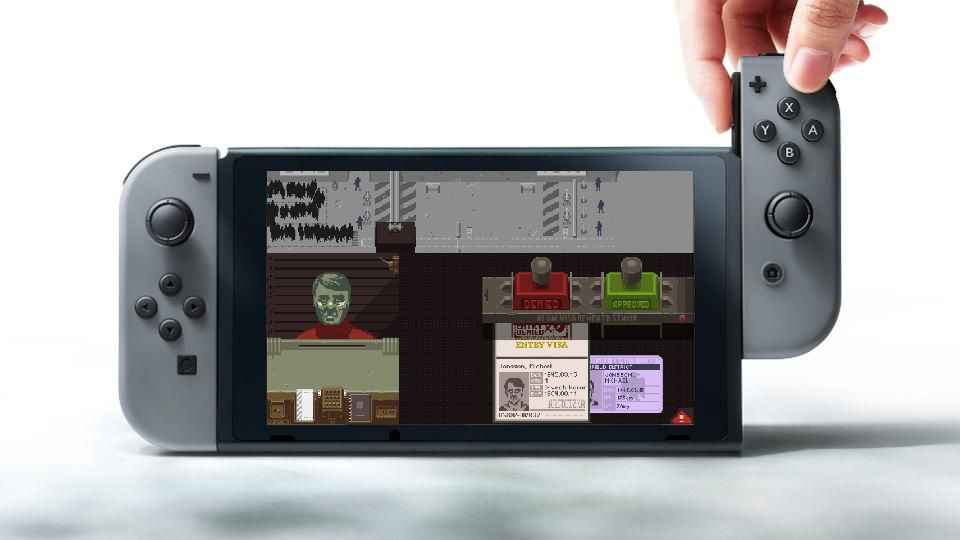 In that vein, there are constructive conversations to be had with the developer of your favorite game about why you would love to see something on Nintendo Switch. Hell, I have fallen into that camp, noting that the PlayStation Vita port of Papers, Please would be fantastic for Nintendo Switch. I could make an entire side-editorial on how the asynchronous nature of gameplay merged in the handheld experience along with touchscreen functionality speaks to Nintendo Switch’s hardware design. What I’m not doing is witch hunting Papers, Please developer Lucas Pope to bully him into submission and make a Switch version of the game.

But being constructive in requests isn’t limited to people with journalistic platforms to air their (admittedly) hot takes. Aside from when it is obvious that developers want you to chat with them about Nintendo Switch ports of their projects, plenty of communities out there generate meaningful discussion on the subject. Appreciation to the developer and their agency is all the difference between thoughtful dialogue about why Kingdom Hearts III may be a good fit for Switch and then just being the absolute worst: 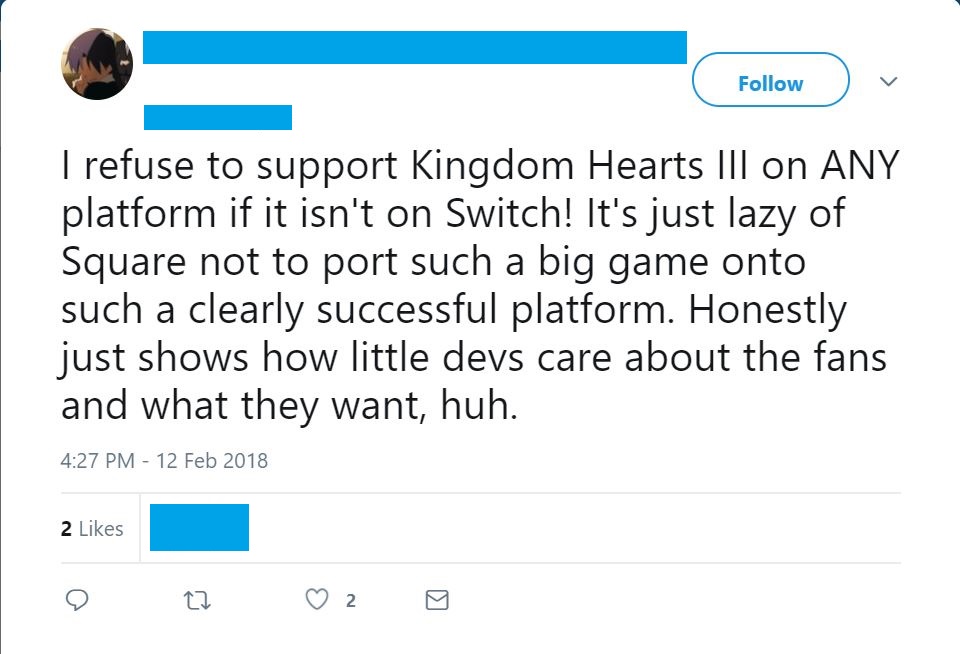 Yes, being vocal about your support (or potential support) of game ports is an excellent metric for developers and publishers alike to know. If that is what you are trying to do, show off your fandom and wave your console-based ideological flag. Keep those discussions constructive and supportive: just don’t be a jerk to developers along the way.