Overcooked! 2 is a Feast of Silly, Chaotic Multiplayer Fun Overcooked! 2 is a Feast of Silly, Chaotic Multiplayer Fun

Two years ago, developer Ghost Town Games and publisher Team17 found a novel way of turning co-op focused multiplayer away from the violence that we see from a lot of other games, into something a bit more silly, frenzied, and probably going to affect your friendships in the form of Overcooked!. As a party style game tailor made for co-op play, the upcoming Overcooked! 2 is looking to deliver even more on the “fun” and “craziness” factors that made the first game a hit, and after having a taste of its sequel, I can’t wait to make room for more.

During a preview event with Nintendo, I got to play a few rounds of Overcooked! 2 on Nintendo Switch. Given that Overcooked! was the type of game that was a perfect pairing with Nintendo’s system, I have little doubt in my mind (so far) that Overcooked! 2 will not only be a great title to carry around on Switch, but that it will also deliver a more refined and (somehow) more chaotic version of an exceptionally crazy multiplayer experience. 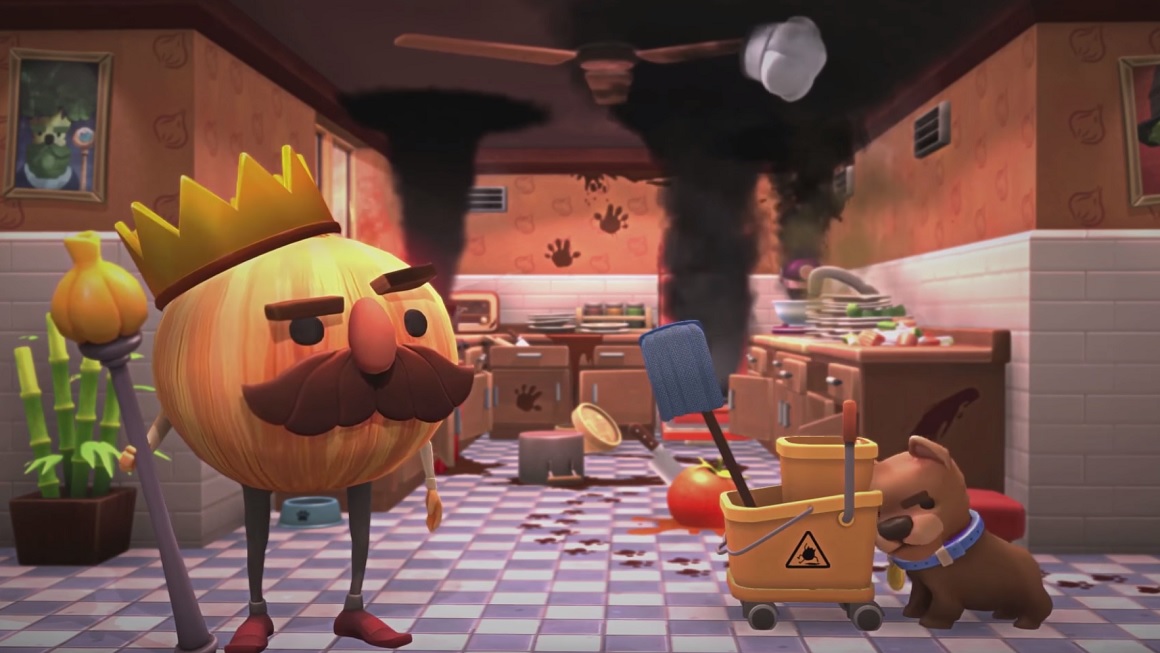 “Overcooked! 2 is a (somehow) more chaotic version of an exceptionally crazy multiplayer experience.”

For those that may not have played the original Overcooked!, the basic premise is that it is a co-op multiplayer title for up to four players that combines culinary arts with chaotic silliness. As a team of four chefs, players are tasked with scurrying around various maps (which each usually present their own unique challenges or obstacles) while crafting various dishes to serve to customers. Whether it’s hamburgers or more classy, elaborate fare (such as the newly-added sushi), players have to work together with — or most of the time, against — their companions to grab and prep the necessary ingredients, create their food, and serve it to customers as quickly and accurately as possible.

With tight corridors and tons of ingredients flying around, Overcooked! was the definition of having to manage controlled chaos, and its sequel (so far) definitely is delivering that and more. The basic premise and gameplay of Overcooked! 2 hasn’t changed all that much from its predecessor, but the game does add a few significant new wrinkles to its fast-paced cooking mechanics, on top of the game’s core structure of grabbing ingredients, chopping them up, and mixing them together to craft your recipes. 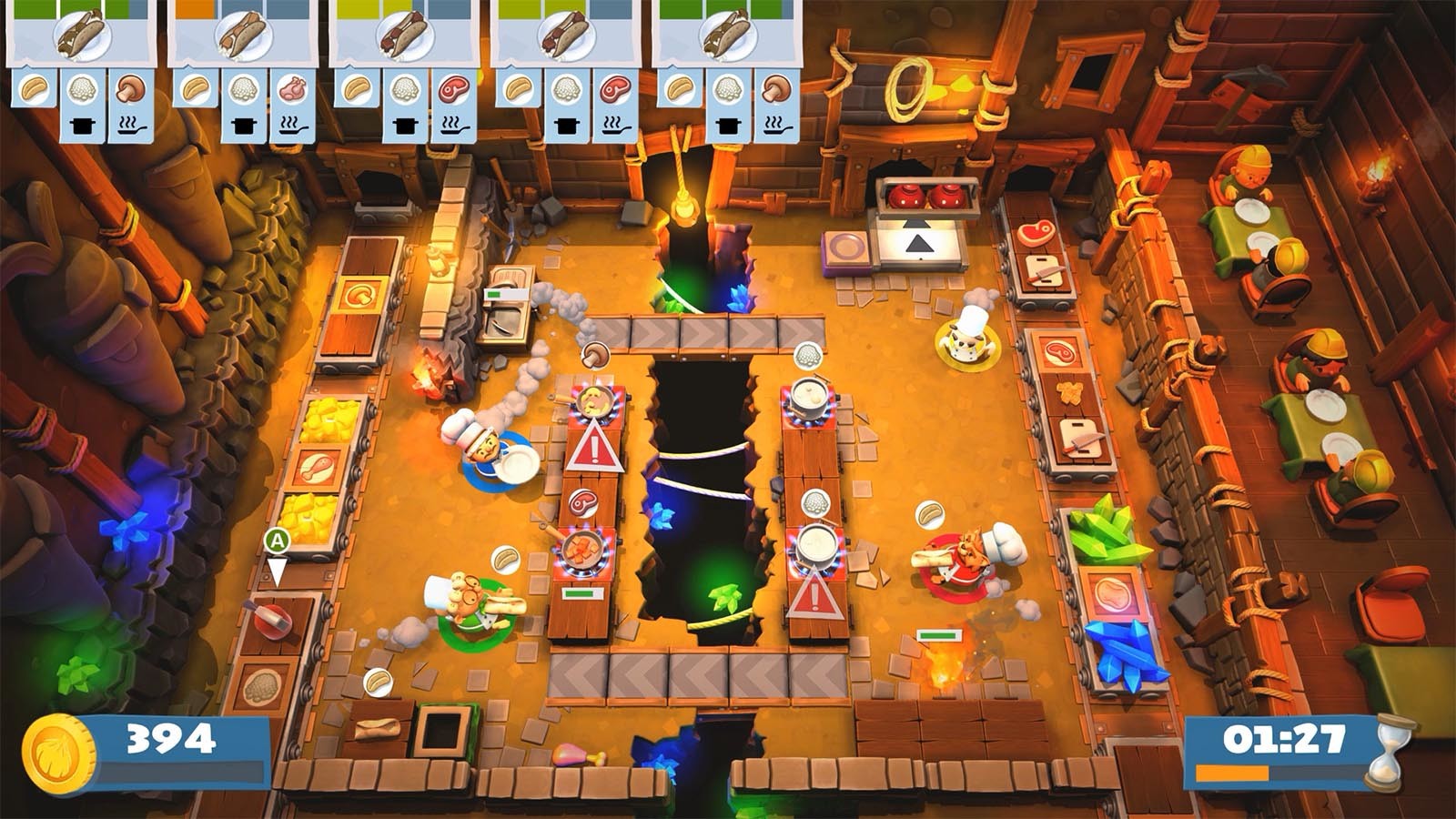 “The basic premise and gameplay of Overcooked! 2 hasn’t changed all that much, but the game does add a few significant new wrinkles to its fast-paced cooking mechanics.”

Notably, Overcooked! 2 introduces a few new gameplay elements and features, with the biggest being that players can now toss and pass ingredients to one another. While this may not seem like a significant upgrade for most games, for Overcooked! 2 that adds a significant new feature, but seems largely as a way of balancing the difficulty towards the game’s other big feature: its new maps.

In the demo of Overcooked! 2 that I played, I got a good sense that Ghost Town Games is really going in on delivering even wilder and crazier map designs than ever before, thanks to so-called “dynamic” maps that the developer is implementing to add new challenges on top of the frenzied cooking gameplay. Each of the maps that I played introduced some form of new mechanic to add an extra layer on top of cooking with my teammates, and each was especially challenging. For example, the first map that I played with my team was littered with various conveyor belts moving in opposite directions, which proved as useful for moving around the kitchen more quickly as it was unhelpful when a team member would come flinging at me from the opposite direction when I needed to grab another ingredient. 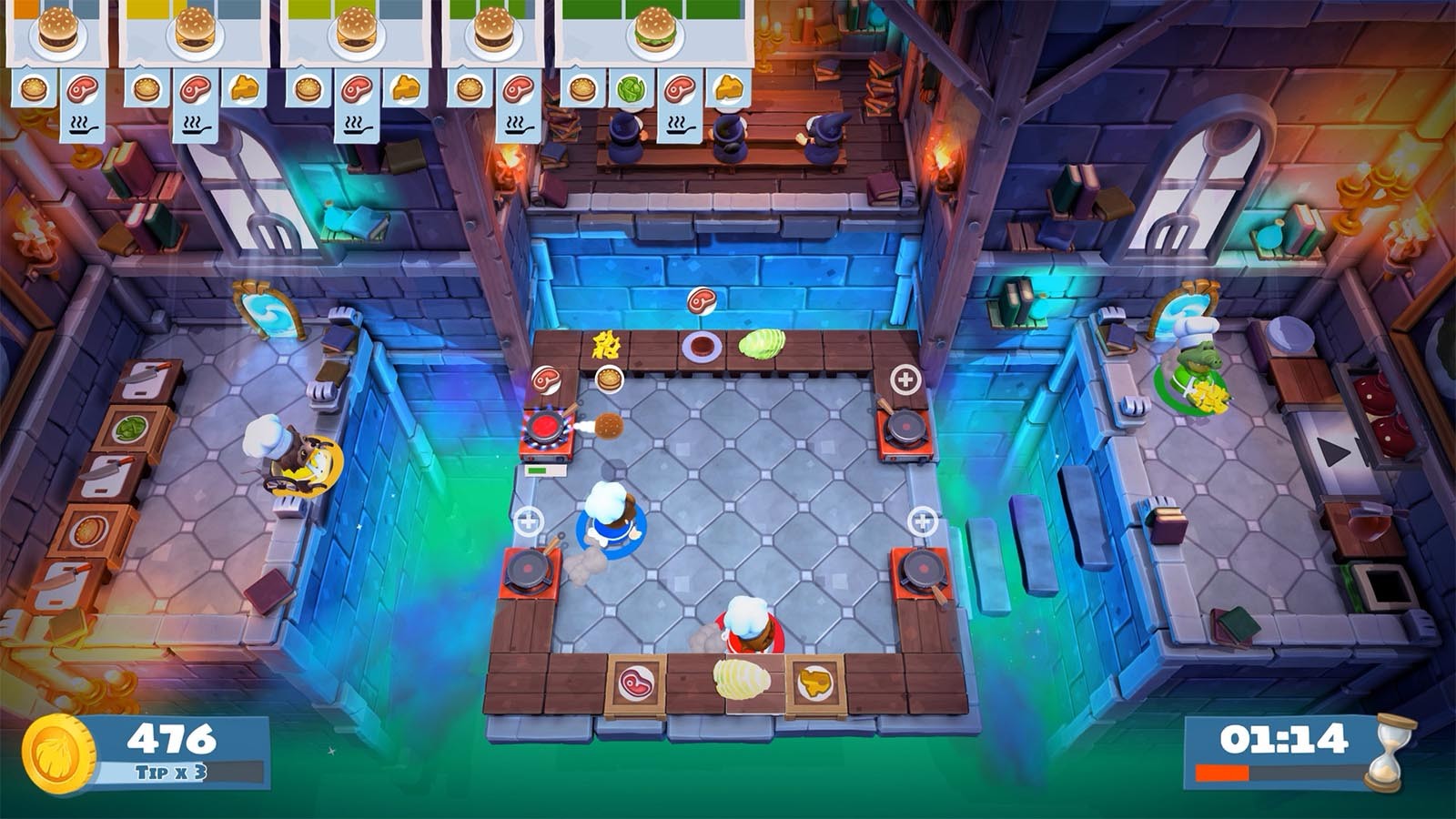 “Ghost Town Games is really going in on delivering even wilder and crazier map designs than ever before.”

One of my favorite examples of the new maps and designs that Overcooked! 2 is implementing came through a very Hogwarts-esque “wizard school” map, were players had a number of challenges to overcame. Namely, that included falling pieces of the map that would block off sections of the map, that that challenge was overcome with the use of various portals strewn throughout the map that could teleport the player through another area. However, it turns out that the portals also made it super convenient to throw food and ingredients through them to the other side of the map, turning what was initially an annoying problem into a very convenient (and necessary) tool for completing the level.

Aside from some of its gameplay changes and its fresh new maps, Overcooked! 2 will also feature the integration of online multiplayer, a welcome feature for the multiplayer-focused title. While you can play the title solo, Overcooked! 2 really demands the collaboration of four players working (and screaming) together. Naturally, I would recommend playing the title locally as that’s where it will really shine (especially when combined with the portability of the Switch), but having the option to play online with friends is definitely a nice incentive to have, as well.

“Overcooked! 2 knows that it has a great base to work with thanks to its core ingredients.”

By and large, Overcooked! 2 seems like the type of sequel that will be more “iterative” than it will completely reshape what players have expected before; which seems to be the right call to make. And that’s not at all a bad thing: just like that delicious sandwich I always get from the diner, Overcooked! 2 knows that it has a great base to work with thanks to its core ingredients, but it’s already looking to have at least enough variety to add a little spice to the mix, as well. Celebrate the best season by causing chaos in the kitchen with Overcooked 2's latest free update. Overcooked! 2 Takes Players to the Carnival of Chaos Next Month