Overwatch’s holiday update, titled Winter Wonderland, is live. The seasonal event will run until January 2nd, and introduce new Christmas themed skins, emotes, highlight intros for almost every character in the game, and give maps Hanamura and King’s Row a snowy makeover.

Further, all the of the in-game Loot Boxes have been replaced with special Winter Loot Boxes, that have been filled with over 100 new cosmetic trimmings, including (a personal favorite of mine) Reindeer Roadhog.

As with previous events, Winter Loot Boxes can be earned or purchased, and each will contain at least one item from our 2016 Winter Wonderland collection—including profile icons, sprays, victory poses, emotes, highlight intros, skins, and more. While the contents of each seasonal Loot Box are random, you can unlock a variety of these cordial customization options in the Hero Gallery throughout the event’s duration.

Also as with previous events, once you unlock an item, its yours to keep forever. However, come January 2 the collection will be stashed back into the vault, and won’t be able to be earned.

In the new brawl, Mei’s Endothermic Blaster no longer unleashes a stream of frost or shoots icicles, but rather shoots a single, super-powered snowball, which kills an enemy in one hit, and requires you to reload by finding piles of snow across the map. Mei will still retain the ability to create ice walls and cyro-freeze, so you will be able to deploy some defense. Her Ultimate for the brawl will turn her blaster into a semi-automatic snowball launcher, allowing you to fire deadly snowballs much quicker. 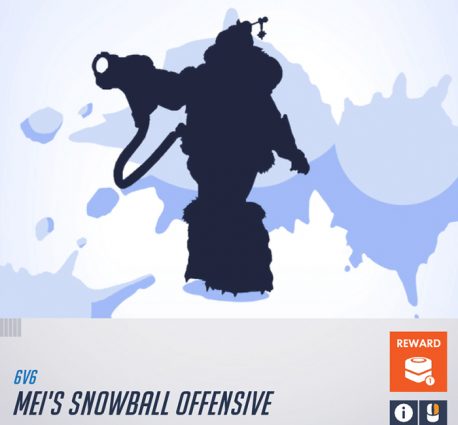 Winter Wonderland is live on PC, PlayStation 4, and Xbox One. A new trailer showcasing the event was also released. You can check it out below, as well as a huge batch of screens from the new update: