Every year, PAX and PAX East show their love for the indie game community by offering booth space to smaller developers.  It is an awesome gesture, and one that I have seen rewarded as the booths have always been pretty packed at the PAXs that I have attended.  It shows the community likes to take a break from the huge Triple-A titles and get down with some smaller, but no less awesome game.  This years 10 winners were just chosen from over 100 entries.

The winners are as followed:

From Digipen Institute of Technology – A Flipping Good Time – Players will have a flipping good time in this fast-paced free-flowing 2D platformer as they flip and fly through an expansive underground world using the fluid nature of gravity to avoid hazardous terrain.

From Alexander Bruce – Antichamber – Journey through the depths within a non-Euclidean labyrinth where geometry and space follow unfamiliar rules, and many obstacles are a matter of perception.  Players must create, destroy and manipulate matter in this mind-bending psychological exploration game.

From Blendo Games – Atom Zombie Smasher -In addition to having one of the best names for a game ever, the game looks incredibly fun.  The player gets to take strategic command of mercenary forces to conduct massive rescue operations using military forces such as snipers, artillery crews, and orbital bombardments to hold back the undead while the civilians escape.

From Polytron – Fez – Also at PAX East 2011, this awesome looking game saw players guiding Gomez, a 2D creature, on a voyage of discovery into the mysterious 3rd dimension. Change his perspective and look at the world in a different way. 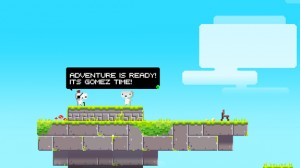 From Final Form Games – Jamestown: Legend of the Lost Colony – A neo-classical top-down shooter (read: shmup) for up to 4 players set on 17th-century British Colonial Mars with a new twist on the genre. There are no shared pools of health or lives; so long as any player survives, the team can be brought back from death.

From Retro Affect – Snapshot – Pic, a robot camera, can actually absorb objects into photographs, removing them from existence! By pasting pictures back into the world, captured objects – everything from doors, light, even copies of yourself – can be used to solve puzzles.

From Murudai – Solar 2 – In this open-world, sandbox game set in an infinite abstract universe, players are the planets. Play constructively: grow your system, nurture life and attack enemy life in huge battles. Play destructively: crash into objects and cause chaos, use orbiting objects like wrecking balls and steal planets.

From SpikySnail Games – Splatters – You play as a group of semi-suicidal, liquid filled Splatters that get their kicks by igniting in colorful confetti bombs of liquid.  Crash into spikes, ride the slides, Air-Strike into bombs or do just any stunt-combo you can think of. With every new maneuver learned, each show becomes more spectacular.

From Bad Pilcrow – Vanessa Saint-Pierre Delacroix & Her Nightmare – Standing between Vanessa and freedom are platforming mechanics. The twist? Her two-dimensional world lies on the surface of a three-dimensional cube, and players must rotate each face to find clever solutions to a wide variety of problems.

And finally, from  Feel Every Yummy – Word Fighter – A one-on-one word battling game that mixes rules from popular word games like Boggle and Scrabble and wraps them around a competitive fighting environment. Think “Street Fighter” meets “Words with Friends”, or word games mashed together with “Super Puzzle Fighter”.

All of these games sound both interesting and amazing.  I have friends who have tried and love Jamestown, and I saw Fez at PAX East this year and loved its unique style.  If you’re going to PAX Prime this year, make sure to drop by the Indie booths and check these out.