Remember the rather disgusting controversy on Dragon’s Crown art? It’s one of the many that have been going on for a while around the gaming industry, where game creators and publishers are constantly being criticized for anything a journalist or some members of the community happens to interpret as sexist or racist.

Looks like some Journalists from Australia and New Zealand had enough of that, and they’re planning to speak up on the issue (and on other problems, like the constant controversy on review scores) during a panel to be held on July the 20th at PAX AUS (Australia’s local spin-off of the Penny Arcade Expo). The title of the panel sounds quite interesting: “Why So Serious? Has the Industry Forgotten That Games Are Supposed to Be Fun?”

Below you can see the original description of the panel (cached by Google): 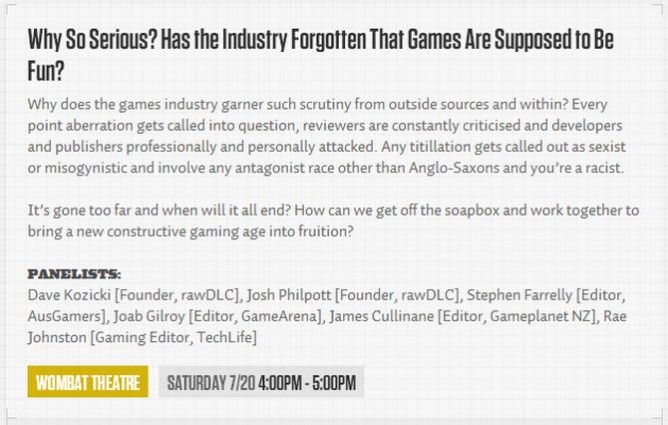 Looks like certain areas of the internet aren’t exactly happy to see people speak up on the issue and offer a counterpoint to the sexism/racism talk (don’t I know…), and they immediately started a crusade against the panel and Penny Archade’s artist Mike Krahulik.

@cwgabriel oh, you don’t MAKE the panels. you just happily provide a platform for a bunch of angry bigots to do it for you lmao — ｡ﾟ･\m\(＞Д＜#)/m/･ﾟ｡  (@chocoboner) June 20, 2013

While Krahulik’s mostly unrelated and unnecessarily inflammatory follow-up comments are very far from justifiable, the unfortunate effect of this all is that someone actually did cave to the pressure, and the panel’s description has since been changed, with the part about sexism and racism redacted. 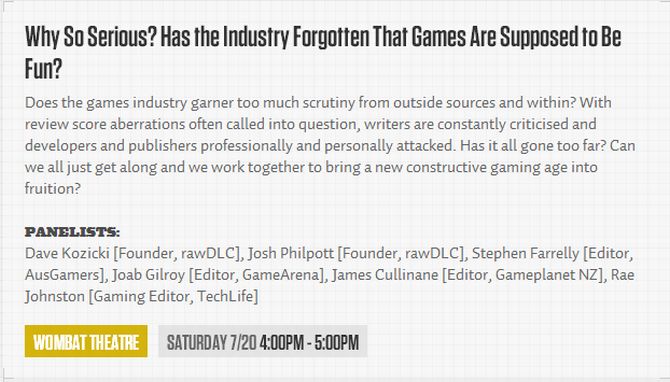 I can’t help but hope that, while the description has been redacted to the point of losing most of its descriptive purpose, the panelists aren’t being forced to remove the topics from the discussion within the panel itself. That would most certainly be a shame. Censorship of ideas due to peer pressure is never a good thing.

Sexism and racism are real, tragic issues, but the fact that they’re often thrown around like a blanket when not really warranted (often with the effect of muddling the actual problem and alienating support towards the cases in which such definitions are really warranted) is another very real issue and deserves to be discussed.

Personally, I feel it’s rather sad that the industry has come to a point in which people can’t dare to speak up against the mob, even more so at a panel that is supposed to facilitate discussion. Has the industry forgotten that games are supposed to be fun? Unfortunately looks like some really did. PAX East, West, and Unplugged dates have been announced for 2021. Of course, given the ongoing pandemic, these could easily change. DualShockers at PAX Online — Watch Our Panels on Persona and Nintendo 64! PAX West Tickets and Merchandise Are Now on Sale