Sony's Everybody's Golf is off to a good start on mobile platforms in Japan.

To celebrate, those who signed up will receive 30,000 coins in in-game currency, two avatar prize tickets, and a limited edition outfit.

The game will be released in Japan next week for iOS and Android, and pre-registrations have begun on June 1st, meaning that the goal has been reached exactly in one month.

Sony recently mentioned that its mobile business will focus on the Japanese and Asian market for the time being, and it might possibly expand to other regions depending on the results in Asia.

ForwardWorks has several games planned after Everybody’s Golf, including What Did I Do To Deserve This, My Lord?, Arc the Lad, Wild Arms, Dokodemo Issho, PaRappa the Rapper and Summer Holiday 20th Century. A game developed in collaboration with Square Enix has also been teased, while Aida of Sky and Sea directed by Sakura Taisen creator Oji Hiroi will be the publisher’s first original IP. 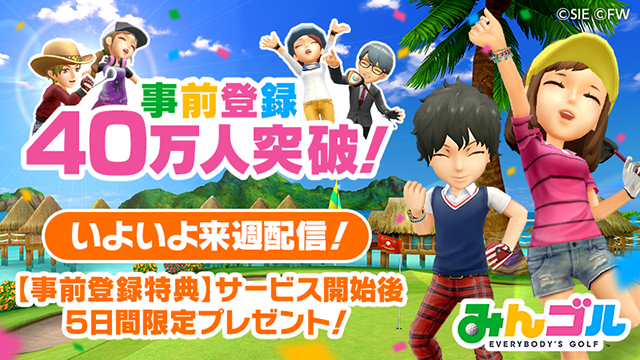